With Tyreek Hill in the huddle, anything seems possible for Miami Dolphins 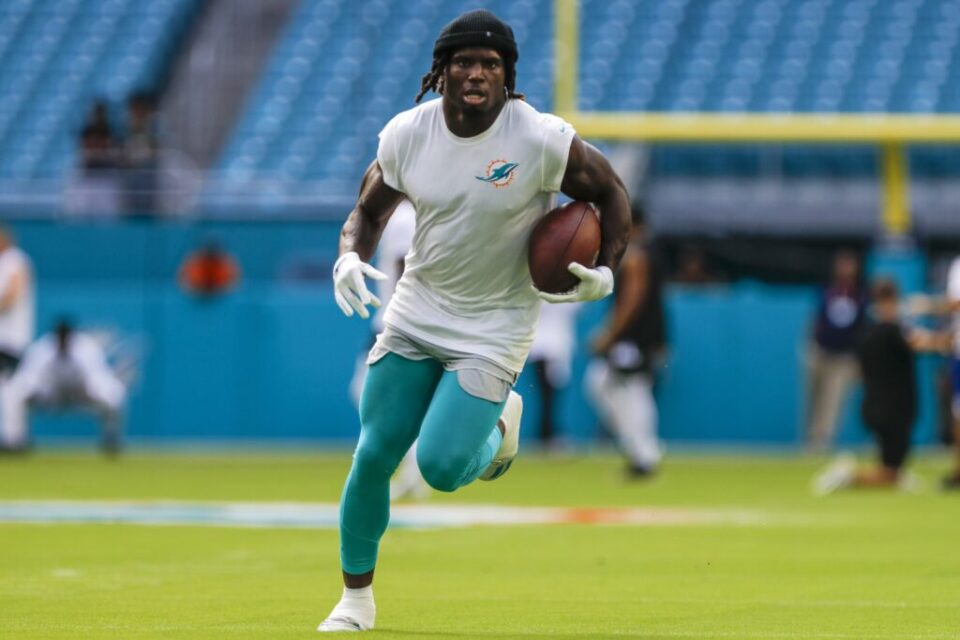 When you pair the most dynamic Miami Dolphins offensive player this century with arguably the most quarterback-friendly offensive system in team history, super fun things aren’t just possible — they should be expected.

It all came together for the first time Saturday night for Mike McDaniel, Tua Tagovailoa, and Tyreek Hill — a night that was as much a celebration as it was an exhibition.

Tua, Tyreek, and the Dolphins offense blitzed Philly’s backups with an absolutely stunning first quarter in Miami’s 48-10 shellacking of the Eagles — a perfect final tuneup for a team that looks ready for the games to start counting.

McDaniel, the showman, gave the paying customers what they wanted Saturday: He played his starters, including Hill, for the first time in aqua and orange, and he pulled no punches.

Hill, the highest-paid wide receiver in league history and cornerstone of Miami’s offseason overhaul, needed just one snap to start earning his money.

McDaniel dialed up a deep shot to Hill on the first play from scrimmage, and Tua connected on a 51-yard bomb. The pass was slightly underthrown, but Hill is a one-man problem solver. He adjusted to the ball, secured the catch, and sent tens of thousands of Dolphins fans — both in the stadium and around the country — into delirium.

“I was just happy for those two individuals because they’ve invested a lot,” McDaniel said after the game, his heart heavy from the news that Dolphins executive Jason Jenkins had died earlier in the day. “I was happy for the team, the organization. They’ve invested a lot. Let’s just say it was cool to see them not blink and do what they love doing.”

The play was the actualization of seven months of planning — a play call that got Hill in a favorable matchup (he ran past backup corner Mac McCain III and then around backup safety K’Von Wallace), protection that afforded enough time for the play to develop and a good-enough throw from Tagovailoa to pay it all off.

“The throw wasn’t to my liking,” Tagovailoa said. “If it was a better ball, more in front of Tyreek, we could have scored on the first play. [But] it was a credit to the practices we had with the Eagles and how hard our guys have been working.”

Tua didn’t need to wait too long to convert the opportunity into points. Three plays later, the Dolphins were in the end zone — on an 8-yard pass to River Cracraft — and you could have forgiven McDaniel for basically calling it a night.

Too many important players have suffered too many needless injuries this preseason, and the temptation might have been strong to shut down his starters after just one drive. And McDaniel did, sort of. Hill wouldn’t see the field again.

But Tagovailoa remained in the game for two more drives, both ending with points. When McDaniel finally gave him the hook, Tua had completed 6 of 7 passes for 121 yards and posted a perfect 158.3 passer rating. In three drives, the Dolphins’ first-string lit up Philly’s reserves for 17 points and 185 yards.

Dolphins fans can dare to dream

That was just the start of the good vibes Saturday for the Dolphins, who set a franchise record for points in the preseason — showing no ill effects of the stomach bug that ripped through their locker room and caused the cancelation of their final training camp practice of the year.

Basically every question surrounding the offense got an encouraging answer Saturday.

That toothless ground attack from the first two preseason games? A distant memory. The Dolphins as a team went over 100 yards in the first half alone.

Mike Gesicki’s growing pains at a new position? He caught his only target for 18 yards and wasn’t a liability in protection.

Put it all together, and the Dolphins’ offense for once looks like it might hold up its end of the bargain.

And considering the top-end talent on the defensive side, it’s not like the Dolphins will need to put up 40 a game to compete.

After a generation of heartache, this offseason of extreme change has given Dolphins fans permission to get excited again. And Saturday night’s blitzkrieg suggested that that optimism is not only warranted but perhaps even understated.