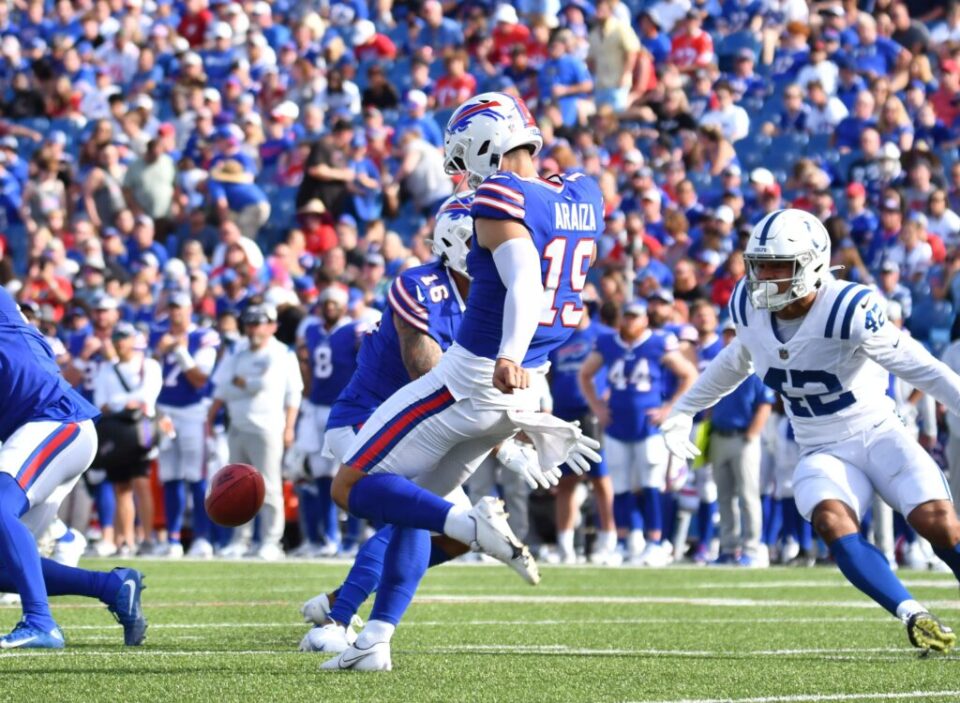 Matt Araiza will not punt for the Buffalo Bills this season. On Saturday, the Bills released the rookie punter following the filing of a civil suit that alleged the sixth-round pick had sex with a 17-year-old high school student before gang raping her with two others last year.

Araiza, who was a 21-year-old student at San Diego State at the time of the alleged incident, denied the accusations through his agent on Friday. Bills GM Brandon Beane, following the punter’s release, confirmed a report by The Athletic that the team was informed by the alleged victim’s lawyer about the accusations in late July.

Araiza was held out of the Bills’ preseason finale against the Carolina Panthers on Friday. Less than 24 hours after that game ended, Beane announced to reporters that Araiza was released in a press conference.

“I would say the last 48 hours have been very difficult, for a lot of people,” Beane said. “It’s been tough, and we sympathize with this whole situation — all of the parties involved, this young woman, what she went through — really feel bad for that whole situation, and ultimately, this is a legal situation. We don’t know all the facts, and that’s what makes it hard. But, at this time, we just think it’s the best move for everyone to move on from Matt and let him take care of this situation and focus on that. So, we’re going to part ways there.”

According to The Athletic’s Tim Graham, agents had been notified this weekend by the Bills that the team was seeking punters for future tryouts. The Bills released veteran punter Matt Haack on Monday, prior to the allegations being made public by the Los Angeles Times on Thursday. Haack signed with the Indianapolis Colts on Wednesday.

“We tried to be thorough and thoughtful, and not rush to judgment,” Beane said. “And I would say it’s not easy. You’re trying to put facts — around a legal situation — sometimes with limited information.”

“It is something that I and we take very seriously,” McDermott said.

Beane said Araiza gave his version of the alleged events when the Bills were approached with the accusations. Ultimately, the Bills eventually decided the allegations against Araiza were valid enough reason to move on from him.

Beane said, “we’re not perfect,” when asked why the decision didn’t come sooner. Beane said the civil suit had more detail than the initial information the team received from the alleged victim’s lawyer.

Araiza, nicknamed “Punt God,” punted once for 82 yards in the first two preseason games for the Bills.

According to the Los Angeles Times, Araiza, 22, is accused of having sex with the teenage girl before taking her inside his home to be “repeatedly raped” by multiple men as she went “went in and out of consciousness.”

Araiza and two other men are accused of being involved in the alleged gang rape. However, Araiza’s lawyer claimed to the LA Times that the rape allegations were false.

“It’s a shakedown because he’s now with the Buffalo Bills,” Armstrong said. “There is no doubt in my mind” that Araiza didn’t rape the teen.

According to the civil suit, the victim, identified as Jane Doe, alleges Araiza admitted over the phone to having sex with the then-17-year-old and advised her to seek out a sexually transmitted disease test. However, when the victim asked Araiza to confirm if the two had intercourse, Araiza claimed that he didn’t remember anything from the night, and his tone in the conversation allegedly changed.

“The facts of the incident are not what they are portrayed in the lawsuit or in the press,” Araiza said in a statement (via ProFootballTalk) on Friday. “I look forward to quickly setting the record straight.”

As of Saturday, there haven’t been any arrests in the case, and San Diego police have yet to name any suspects. According to the Los Angeles Times, detectives recently handed over their investigation to the San Diego County district attorney’s office.

While the accusations against Araiza took place prior to his time in the NFL, there is a precedent for punishment for infractions made during a college career. In 2011, former Ohio State QB Terrelle Pryor, as a condition of his eligibility for that year’s supplemental draft, was suspended for five games for trading Ohio State memorabilia for cash and discounted tattoos while still in college.

Cleveland Browns QB Deshaun Watson’s 11-game suspension and $5 million fine were agreed upon this summer as part of a settlement with the NFL for his 24 civil suits stemming from sexual misconduct.

Those suspensions could offer the NFL precedent if the league were to seek a penalty for Araiza.