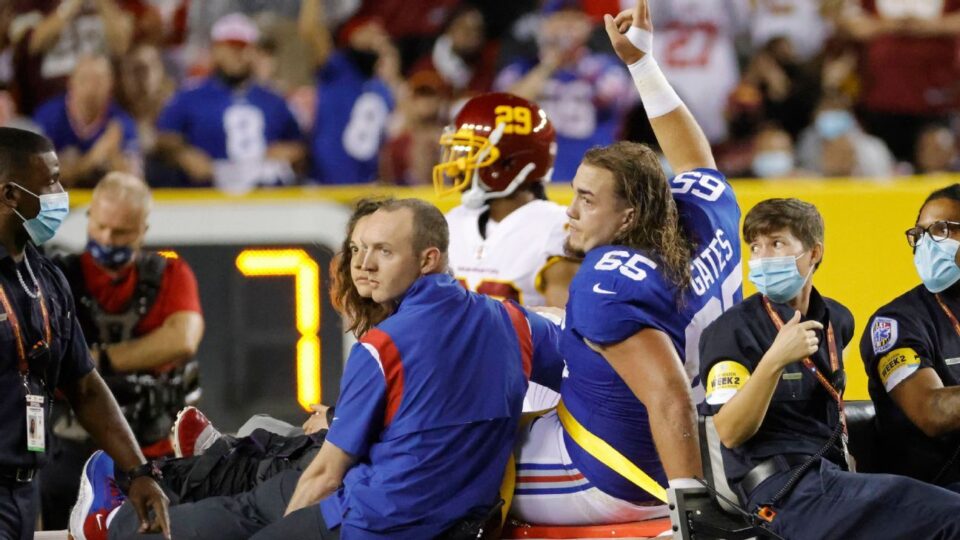 EAST RUTHERFORD, N.J. — The dreaded cart. The courtesy clap for the injured.

New York Giants offensive lineman Nick Gates wanted no part of it. He had never needed it before the Thursday night game against Washington in Week 2 of last season.

Not until he heard his left leg go “crack, crack, pop” and started flopping back and forth while he laid on the grass at FedEx Field. The fibula and tibia were broken. There would be seven surgeries to follow, and a rehab that is still in progress.

The injury was so gruesome that NFL Network, which was broadcasting the game, refused to show the replay of Gates’ leg getting caught underneath Washington defensive lineman Daron Payne. The Giants’ training staff and doctors stabilized the leg in an air cast and Gates was taken off the field smiling and waving to signify he was OK.

It was a strange reaction given the circumstances and severity of the injury — unless you know Gates.

“I’m good,” Gates recalled telling his mother and brother during a FaceTime call soon after he was taken off the field. “I broke my leg. It snapped in half. But I’ll be good.”

Gates was smiling on that call while his mom, Sonya, was hysterical and his older brother, Matt, was crying for the first time that Nick remembers. It was Gates — pre-pain medication — providing the reassurance for his family as he was being prepared for a trip to Virginia’s Inova Fairfax Hospital with his leg and career in jeopardy.

When he was in the ambulance, he could feel — and hear — the bones in his injured leg rubbing together.

“‘Hey, you trying to hit every pothole or what?'” he asked the driver with a chuckle.

This is how it was for most of the early weeks of his recovery. Gates, who started three games in 2019 and all 16 in 2020, was taking it all in stride as if dealing with a sprained ankle. He spent most of that time with his leg elevated — either in a hospital room or at his New Jersey home — and his mom at his side.

There was a moment he feared losing his leg. There was a surgery this spring when doctors removed the rod and had to clean out the bone. Doctors have assured Gates he will return to the field, but it’s unclear when that will happen or how effective he will be when he does.

“This guy has been rehabbing unbelievable,” coach Brian Daboll said. “He’s made a lot of strides. Where he’s at and when he’s ready, I couldn’t answer that right now.”

Gates was put on the physically unable to perform list this week as the Giants open training camp, but his mindset remains positive.

“What does being negative about this do for me? … What, am I going to feel sorry? It’s broken,” said Gates, who in a 45-minute interview with ESPN nonchalantly talked about all the ugly details. “I’m not going to be down in the dumps. No use for that.”

‘He never complained once’

From the moment he was carted off the field to now, Gates’ approach has been inspiring and perfectly on brand according to those who know him best.

“The guy saw his leg facing a different direction. … He had multiple surgeries, he never complained once,” said his agent, Jon Perzley of Sportstars. “That’s just Nick.”

Gates, 26, says his leg broke in the best way possible. Right in the middle.

“Toughest dude on planet Earth” is how Perzley described Gates the week after the injury.

Said Sonya: “Nicholas is very tough. There are only three times in his life he’s ever told me something’s hurt. I know when he says that word [‘hurt’] I better pay attention.”

The first was when he broke his hand at age 6. That required surgery and involved screws being placed in his hand. And there was the appendicitis when he had COVID-19. The third time happened early in this recovery when Gates’ leg swelled too much and required a procedure called a fasciotomy. Doctors told him that losing his leg was among the possibilities if it swelled for too long.

While waiting for his doctor to come out of surgery, Gates cried.

“I calmed down after that,” Gates said.

His initial surgery was Sept. 17, and the next day doctors wanted Gates to take a few steps. That was like giving a drag racer the green light. A few steps? He walked laps, and released a video of himself on social media hobbling around the hospital floor.

Two days after snapping his leg and one day after surgery, Giants OL Nick Gates was back up and walking. Beast! 💪💪

It was a gritty response by Gates, who at 6-foot-6 and 318 pounds is a tough guy in a sport full of them. He once started a scrum with Los Angeles Rams star defensive tackle Aaron Donald, and he always seems to be involved in pushing after a play or the first to defend his quarterback when necessary.

That attitude has served him well on a difficult path from undrafted rookie out of Nebraska (2018) to NFL starter to team captain for the Giants. Gates regrets not being there for his teammates most of last season and vows to be there for them this fall.

His first question to every doctor: “Am I going to make it back onto that field?” Sonya said. “And they all assured him he would.”

Gates started running in the spring and is finally starting to regain strength in his legs. There are still plenty of hurdles to clear. The leg is stable, but there is a difference between being able to jog and anchoring to stop a 350-pound nose tackle.

There might be doubters who believe he’s just putting on a happy face, but Gates views his situation as just another career obstacle.

“I’ve always been kind of the underdog,” he said. “Nobody expected me to win the job in college. I won the job in college. Nobody expected me to be anything as an undrafted free agent. I became something. I was a captain. I think that is cool. I was undrafted and was a captain in the NFL for the New York Giants! There isn’t much better than that.”

And if he doesn’t make it all the way back?

“I don’t know if it would hurt me, but it would be weird,” he said. “I’ve never had a job, technically.”

The Giants are going to give Gates time. They signed Jon Feliciano from the Buffalo Bills this offseason knowing the challenge Gates faces.

“When I got here, I was just worried about his quality of life,” first-year GM Joe Schoen said of Gates. “The fact that he is where he is and may be able to play in the preseason is amazing. Credit to the kid. He’s been working his butt off.”

Whenever Gates returns, that moment will be special given the severity of the injury and the speed bumps he has hit.

“I have no doubt [he’ll be back],” Sonya said. “I don’t think there is any doubt in his mind either. It’s going to be an amazing day when he steps on the field to play.”

Then the smile he had on his face while being carted off will make more sense to the rest of us.