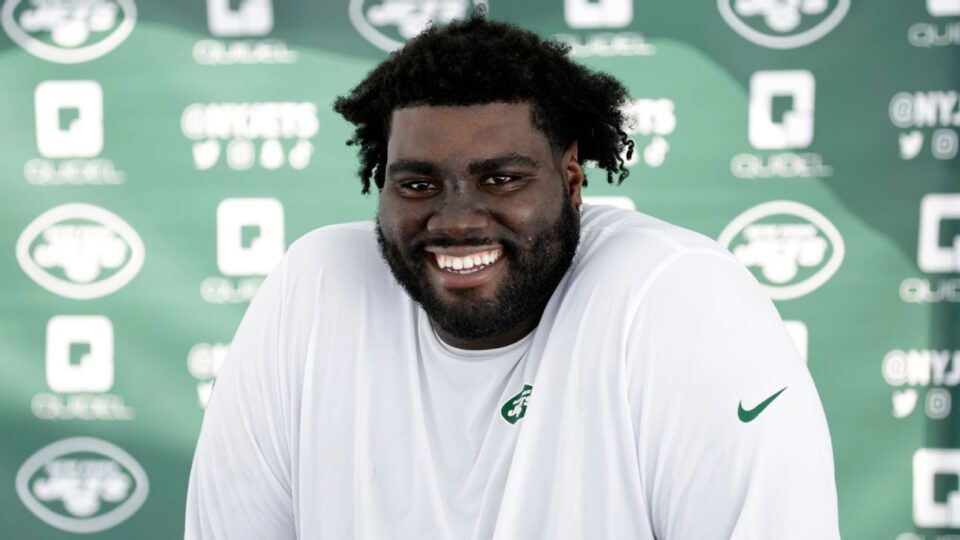 FLORHAM PARK, N.J. — A year ago, New York Jets tackle Mekhi Becton was so high on his new right-hand man, guard Alijah Vera-Tucker, that he retweeted a photo of them on the practice field, predicting, “JORDAN AND PIPPEN!!! Mark my words!!!”

Becton’s right-hand man is now his left-hand man. The Jets flipped their offensive line, moving Becton and Vera-Tucker — drafted 11th (2020) and 14th (2021), respectively — to the right side.

This isn’t how general manager Joe Douglas drew it up when he vowed in 2020 to build a dominant offensive line, but the Jets remain bullish on the unit after the big changes.

“Personally, I’m excited about the right side,” coach Robert Saleh said. “You have a couple of potential All-Pros, in my opinion. They are two fantastic young players. Then you’ve got two veterans on the other side (George Fant and Laken Tomlinson). It’s a cool combination and a cool group.”

Saleh likes Fant so much at left tackle, where he took over in Week 2 following Becton’s season-ending knee injury, that he was willing to uproot the 6-foot-7, 363-pound (or thereabouts) Becton. The Jets drafted him to be their long-term left tackle (after signing Fant, by the way), just like they drafted Vera-Tucker to be a fixture at left guard (they moved him to accommodate Tomlinson).

On paper, the offensive line has a lot of potential, but so much hinges on Vera-Tucker and Becton settling into their new spots. Before the first practice on Wednesday, when the Becton move was announced, he leaned over to Vera-Tucker and said, “Same stuff, different side.”

Well, it’s a little more complicated than that. Former Jets left tackle Kelvin Beachum, entering his third season as the Arizona Cardinals‘ starting right tackle, knows the position change as well as anyone.

“I think the biggest transition is your stance, eyes and hand placement,” he told ESPN. “I’m going into Year 3 of the switch, but when you have played a position for eight, nine years, there are some motor patterns that have to be reworked. If you’re a pro, you will figure it out.”

Becton and Vera-Tucker, both 23, aren’t old enough to be stuck in their ways, which factored into the team’s decision to move them and leave Fant and Tomlinson in their spots.

Becton said he embraces the change, also acknowledging he must “change my technique up” and that it’s “a work in progress.” He needs to adapt quickly because the Jets face a formidable slate of pass-rushers that typically rush on Becton’s side. The list includes T.J. Watt (Pittsburgh Steelers), Trey Hendrickson (Cincinnati Bengals), Von Miller (Buffalo Bills) and Matthew Judon (New England Patriots).

The Jets face superstar Myles Garrett (Cleveland Browns) in Week 2, but he usually rushes from the left-tackle side. Until recently, teams always put their best pass-rusher at right defensive end, but the trend has changed. Saleh said gifted pass-rushers are coming from every direction.

“So having two bookends like we do, we’re very fortunate,” he said.

The team expects Vera-Tucker and Becton, both with good movement skills, to thrive as run-blockers. You need nimble linemen in a zone scheme so they can cut off angles and get to the second level, taking on linebackers.

The Jets weren’t a consistent rushing team last season, but they actually ran well to the inside right and outside right. They averaged 4.7 yards per carry in those directions (eighth in the NFL), according to Next Gen Stats. The linemen on that side (tackle Morgan Moses and guards Greg Van Roten and Laurent Duvernay-Tardif) weren’t retained.

The bigger problem was the left side (Fant and Vera-Tucker), as they averaged only 4.3 per rush (22nd) on plays to that side. That’s a big reason why they signed Tomlinson to a three-year, $40 million contract in free agency. He’s regarded as one of the best guards in the league.

The man in the middle, overshadowed by the high draft picks and expensive free agents, is center Connor McGovern. His job is to galvanize the group. He likes having Tomlinson and Vera-Tucker at his side.

“They are truly the definition of dominating, physical guys,” McGovern said. “If you went into a lab and wanted to build guards, that’s what you’re building on both sides. I’m definitely one of the luckiest centers in the league to have two guards like that.”