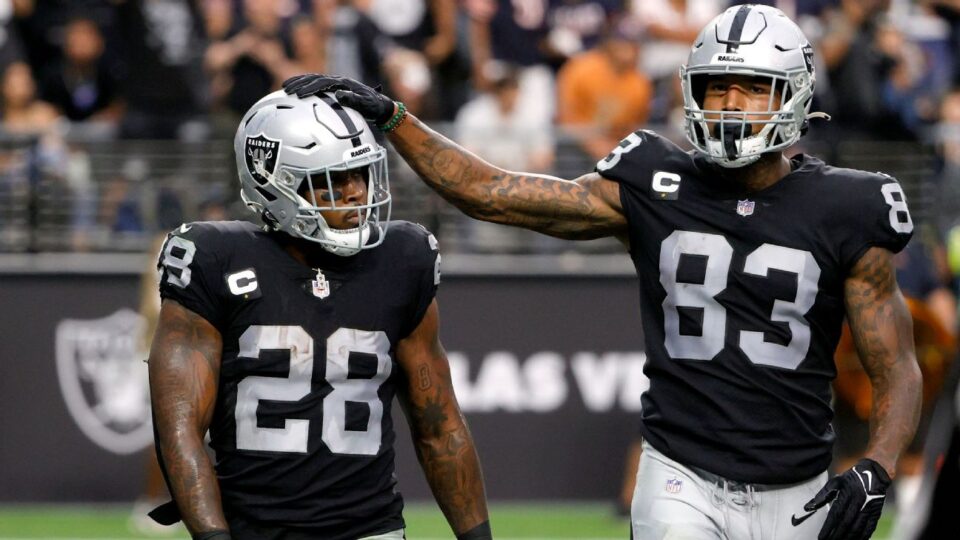 HENDERSON, Nev. — Running back Josh Jacobs, author of two 1,000-yard rushing seasons in his three-year career, did not have his fifth-year option picked up this offseason by the Las Vegas Raiders‘ new regime.

Darren Waller, who set a franchise record with 107 catches two years ago, is just the 17th highest-paid tight end in the NFL in terms of average annual value and is still hoping for a contract extension.

And while two of quarterback Derek Carr‘s most potent threats are entering a season without contracts they would like, both of the Raiders’ 2020 Pro Bowlers insist they are focused on football, rather than the business end of things.

“I’m a firm believer in the work that you put in is going to pay out for itself, and I had to be here either way,” said Jacobs, one of three Raiders’ first-round picks in 2019. “And this is where I want to be. I didn’t have no problem with it. It just gave me more of a reason to come in every day, gel with the guys and work.”

Waller echoed President John F. Kennedy’s “Ask not what your country can do for you, but what you can do for your country” mantra in explaining how he compartmentalizes desiring a new deal on par with his skill level and production with being a professional.

“As a human being, you want to think about things like that, but for me, I feel like adopting the mindset of when I’m here, what can I give to the team? As opposed to, what I can get?” Waller said. “If I give enough, I feel like when my time comes to an end on Earth … people are going to remember me for the impact I had on people or things I was able to do for the world.

“So I try to take that attitude into the smallest details and parts of my day. Because, yeah, we are humans, and we can get distracted, but I feel like taking that approach has definitely helped me to focus in on just what I can do within the day here. And it keeps it simple and keeps it fun.”

And that’s just on offense. Defensive end Maxx Crosby got a four-year, $99 million extension while Pro Bowl linebacker Denzel Perryman is entering the final year of his contract and is also looking for an extension.

Waller would seem to be next in line, though, at least when it comes to offense, as the Raiders still have more than $24.1 million in salary cap space for 2022, per ESPN Stats & Information.

“I’m focusing on playing right now,” said Waller, who still has two years left on the four-year, $29.8 million extension he signed in 2019. No money is guaranteed, though, for this season or next.

Jacobs, meanwhile, has rushed for a combined 3,087 yards and 28 TDs while catching 107 passes for 752 yards in his three seasons.

What you need to know about the Las Vegas Raiders:

But with the additions of Brandon Bolden in free agency and Zamir White in the draft and the return of Kenyan Drake from a broken right ankle, there is a chance that Jacobs’ production might go down in a potential running-back-by-committee scheme. Thus, potentially hindering future earnings, no?

Same with Waller, considering the addition of Adams and the emergence of Renfrow.

Not that either of them is focusing on those factors now.

Besides, Jacobs looks sleeker and faster than he has in his previous three camps. Even as he sat out OTAs and minicamp dealing with an undisclosed physical issue.

“Offseason, I was just getting my body right,” Jacobs said. “I didn’t have anything that was too crazy. I was just focusing on what I feel like I needed to focus on at that time.”

The focus now, then, is on what happens on the field, rather than at the bargaining table.