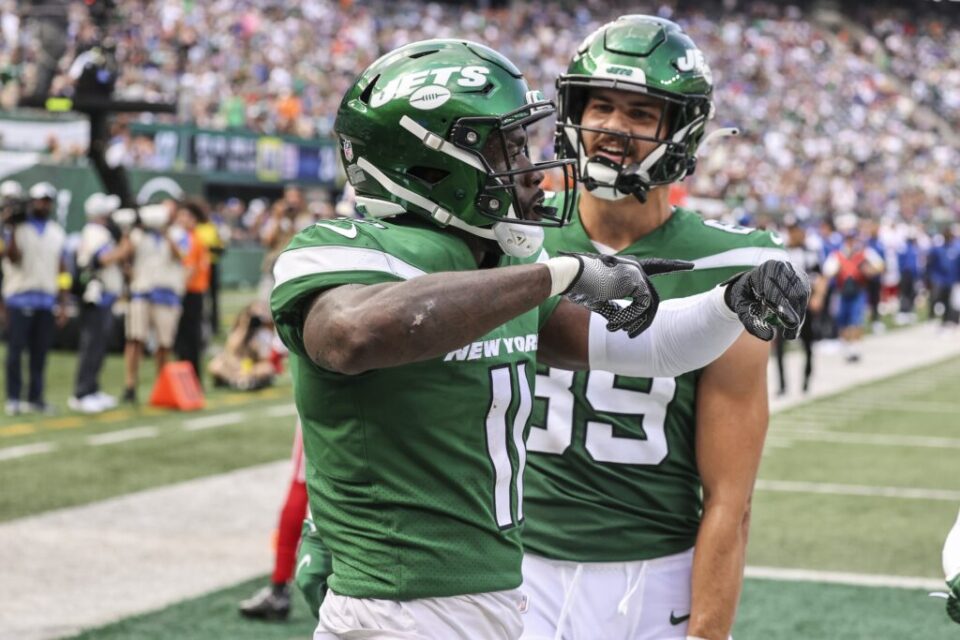 The NFL preseason is finally past us. Instead of fans spending every waking moment worrying about the health of their favorite team’s stars, they get to anxiously wait at least 10 days to see their rooting interest play in a game that matters.

Sunday boasted two games. The Giants and Jets faced off in a battle for New Jersey preseason bragging rights. Meanwhile, the Lions traveled to Pittsburgh for the league’s final 2022 preseason matchup.

It was the final push for players looking to make their respective squads. There was no shortage of names to choose from whose stock rose and dropped throughout the day.

The Jets defeated the Giants, 31-27, at MetLife Stadium.

Former second-round pick Denzel Mims has been an enigma since joining the Jets. The constant whispers surrounding the situation have been that the front office loves him, and the coaching staff has never felt the same way. Now, his style doesn’t necessarily fit in Mike LaFleur’s passing attack. Mims requested a trade earlier this week, then played big, catching 7 of 8 targets for 102 yards and a beautiful touchdown town on the right sideline.

Austin Calitro was all over the field for the Giants early on in this game. The fifth-year linebacker is the definition of a journeyman player. The undrafted defender from Villanova started 11 games over his first two NFL seasons but has only played 20 defensive snaps since. His spot on the roster is far from guaranteed, but on Sunday against the Jets, he was all over the stat sheet.

Mike White sparkled a bit last season while filling in for an injured Zach Wilson. However, it ended in spectacularly poor fashion as the Bills’ defense drubbed White, forcing four INTs from the young quarterback. The four defenses White faced a season ago as the backup on a hilariously undermanned roster were the Patriots, Bengals, Colts, and Bills.

White saved his best preseason performance for last against the Giants, going 13 of 17 for 170 yards and two TDs. He looks poised in the pocket and might be eyeing the team’s QB2 spot after Joe Flacco’s performance.

Tyrod Taylor threw an equally head-tilting interception early on, but that is out of character for the veteran backup. Unfortunately, Taylor was leveled by Jets defensive end Michael Clemons as he delivered his fourth passing attempt. The Giants backup landed hard on Taylor’s shoulder, and Clemons’ weight landed on top of him.

No need to dilly dally. Joe Flacco was bad against the Giants. His poor night during his only preseason action of 2022 culminated in an interception that could make you question if it was real or an All-Madden simulation and you were trying to throw on the run. Instead of lofting the ball over linebacker Austin Calitro, who was midpointing Flacco and the leaking RB, the veteran QB threw it right to him.

Lions vs. Steelers: Whoever starts at QB for Pittsburgh is in trouble

The Steelers defeated the Lions, 19-9, at Acrisure Stadium.

Maybe old habits really die hard. Maybe having a 16-year veteran head coach with no losing seasons in his tenure can very rarely, but sometimes, be a bad thing. There’s no way Steelers fans watched Diontae Johnson and other key starters on the field Sunday afternoon with any emotion other than the sheer terror of a potential injury.

Pittsburgh fans watching the game are certainly getting their money’s worth out of their blood pressure medication. Johnson has played banged-up for most of his young career, and the fourth-year receiver went down again after a 38-yard reception down the left sideline. Meanwhile, T.J. Hockenson went low to block T.J. Watt, who was more noticeably banged-up than Johnson.

And after all that, we sat and watched Najee Harris hurdle a defender on a meaningless third down in a meaningless preseason game because players play, and they don’t have time to think about possible injuries when making split-second decisions on the field. Luckily, none of Pittsburgh’s stars suffered serious injuries. Tomlin said if it was a regular-season game, they might have returned to the field. But that doesn’t make the decision to play them any less questionable.

Aidan Hutchinson once again made his presence known in a preseason outing with a rush from the defensive interior, which earned him a half-sack along with Charles Harris. He wasn’t on the field for long, but it was long enough for him to make his acquaintance with Mitchell Trubisky.

A huge back-shoulder catch for 22 yards from George Pickens got the Steelers closer to field goal position. The rookie receiver already has a presence on the field before he plays in his first regular-season snaps. He caught 8 of 12 targets in three preseason games for 84 yards.

It could be difficult for the young wideout to find consistent production behind a questionable offensive line. But if he can build a rapport with whoever is taking snaps for Pittsburgh under center, that back-shoulder throw is one of the most unguardable passes in football.

Tim Boyle went 3 of 8 for 25 yards and one pick and was benched before he could finish the first half of his preseason start against the Steelers. The Lions have been having a genuine QB competition for the QB2 role in Detroit, with neither candidate pulling away. Boyle threw an interception as horrific as Flacco and Taylor, except his wasn’t while on the hoof. He returned in the second half, but things weren’t much better for the fourth-year QB.

It’s unnecessary to be annoyed by something as trivial as a stadium name change. But that’s not going to stop us. It’s been Heinz Field since 2001. Much like the Staples Center becoming Crypto.com Arena, the familiar has suddenly become foreign. They don’t sound good. There is no ring to either name.

Jermar Jefferson had the big 27-yard run, but he only managed one yard on five more carries. Justin Jackson had a nice day at the office, which included a Najee Harris-esque hurdle of Steelers safety Damontae Kazee on a 32-yard reception.

Dalton Miller is the Lead NFL Analyst at Pro Football Network. You can read more of his work here and follow him @daltonbmiller on Twitter and Twitch.