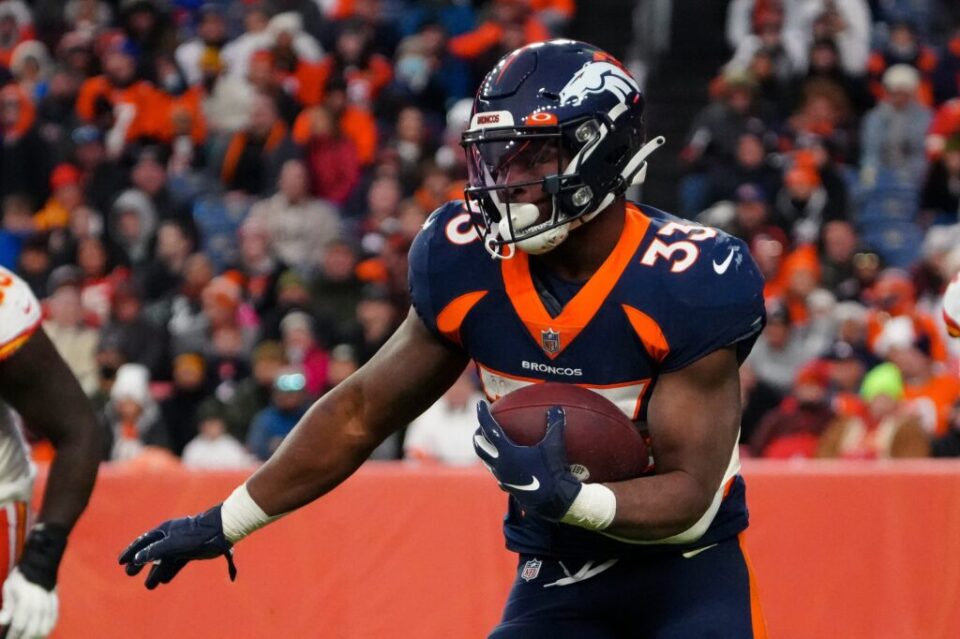 One of the best young running backs in the NFL and fantasy football, Denver Broncos RB Javonte Williams projects to be one of the more intriguing picks this year. With the NFL season and fantasy drafts closing in, what is Williams’ fantasy outlook in 2022, and could he prove to be a value at his current ADP in fantasy football drafts?

2022 is the season Williams is unleashed on the NFL and fantasy football leagues alike. Well, that is what the majority of us have hope for, at least. In his first year out of UNC, Williams brought his physical rushing style to the Broncos and found instant success despite the timeshare with Melvin Gordon.

You could not have had a more even backfield split, with Williams and Gordon rushing 203 times last season. Wiliams turned those into 903 rushing yards, just 18 yards behind his teammate, with four rushing touchdowns. Where he had the edge was in the receiving game, catching 43 of 53 targets for 316 yards and three more scores.

Williams has RB1 upside. We witnessed this last season. He was No. 5 in forced missed tackles, No. 7 in 10+ yard rushes, and No. 7 in yards after contact despite being 15th in carries. Weeks 12-14 gave fantasy managers a glimpse of what Williams could do in 2022, as he averaged 20.4 PPR points as the lead back. With Gordon a free agent, Williams had clear sailing to a potential top-five fantasy upside. Nevertheless, “had” is the keyword.

Despite sitting on the open market for weeks, firing his former representation, and saying he wants to be a lead back for a team, Gordon re-signed with the Broncos in the offseason, albeit on a one-year, $2.5 million contract.

It makes far too much sense for the Broncos from an NFL standpoint. You cannot go wrong with more depth, especially high-end depth. It’s a security blanket in case an injury happens, and they can rotate both Williams and Gordon to keep their legs fresh for what they hope is a deep run into the playoffs.

Sure it sucks for fantasy. I would have loved nothing more than for Williams to get the entire workload. But that does not all of a sudden mean he’s not someone worth targeting. If anything, he might be more of a value.

Sure, it’s unlikely Williams hits the top four when the season ends, but as a rookie in a dead-on 50/50 split, he still finished as the RB17 while averaging 12.1 PPR/game. When you dive into his deeper analytics, like the broken tackles and forced missed tackles, you see a running back with incredible upside anytime he touches the ball.

If anything, Williams will see better touches in 2022. The Broncos have a new offensive-minded head coach in Nathaniel Hackett and this guy named Russell Wilson under center.

With more opportunities in high-leverage situations, such as goal-to-go carries, Williams, who averaged 14.5 touches last season, still has RB1 upside despite his ADP suggesting otherwise. I have zero hesitation when drafting Williams as my RB2 or RB1 if I went heavy WR/TE in the opening rounds.

I don’t know about you, but I cannot wait to watch the AFC West. The NFL offseason was drunk, and it seemed everyone wanted to head out west, including Wilson. For the last two seasons, many believed the Broncos were a QB away from competing for a title. Now we get to put that to the test.

Not only is Wilson one of the premier signal-callers in the NFL, but he is paired with a fantastic offensive mind in Hackett, who comes from the Shanahan/McVay/LaFleur group with the QB collective.

Not only that but the West Coast system is in his blood, as his father spent time with Bill Walsh in the late 1980s. Without question, Hackett benefited from having one of the most talented QBs ever to spin a ball in Aaron Rodgers. But make no mistake about it, Hackett was a phenomenal hire.

Then we get to the rest of the team, which is loaded. Courtland Sutton has 1,200-yard upside serving as Wilson’s “new” DK Metcalf. Over a full year removed from his ACL tear in 2020, I expect to see the Sutton some were hoping for last year. Jerry Jeudy is another candidate for 1,000 yards and needs a bounce-back after an injury-shortened sophomore season.

We haven’t even touched on WR KJ Hamler and TE Albert Okwuegbunam or even the loss of Tim Patrick (ACL) thanks to the depth of this team. Even Albert O has competition in one of the top tight end prospects of this year’s class in Greg Dulcich from UCLA.

If it’s not abundantly clear yet, the Broncos are as deep as nearly any team in the NFL. Pound for pound, this team is in the top tier in terms of both high-end talent and depth. Plus, they have a defense that will keep them in games.

There are only so many ways to focus your game plan as a defense when facing the Broncos in 2022. Most of the attention, rightfully so, will be on the passing game. Facing a higher percentage of dime packages, Williams should find sledding even easier, which is a terrifying thought for anyone facing him in a weekly matchup.

The fantasy community has been enamored with Williams this offseason, and that has not changed. That same bullishness is reflected in his ADP with the fantasy draft season in full force. At the moment, Williams is the RB11 off the board with an ADP of 22 based on the latest updates, placing him at the back end of the second round.

From a talent perspective, you’ll find me at the front of the line advocating for Williams. At the same time, I don’t believe the ADP has fully reset despite it being nearly six months since Gordon re-signed with the team. That was why it was so easy to love Williams. Standing unopposed, he had a top-five upside. That’s not the reality we live in anymore, and it does not matter how much we like Williams if the Broncos like Gordon.

Based on everything beat reporters around Broncos camp have said, they really like Gordon, with the current feeling of a 50/50 to 60/40 split between the two, not a 75/25 or 80/20 like some have been promoting Williams would see in 2022.

Just based strictly on ADP, which is nothing more than a baseline recommendation of where players are going, I would prefer Aaron Jones (ADP 20), Leonard Fournette (25), James Conner (30), and even Saquon Barkley (24). Those four are my RBs 10-13 in my current rankings, with Williams the RB14. In our consensus 2022 fantasy rankings, Williams is the RB13.

If Williams slips into the third round, I have zero hesitation selecting him and even don’t hate it at the 2/3 turn to lock in some upside to my fantasy team. If anything happens to Gordon, it’s game over. But odds are, someone in my drafts is enamored with Williams and selected him well before I get the chance to catch him sliding down the board.