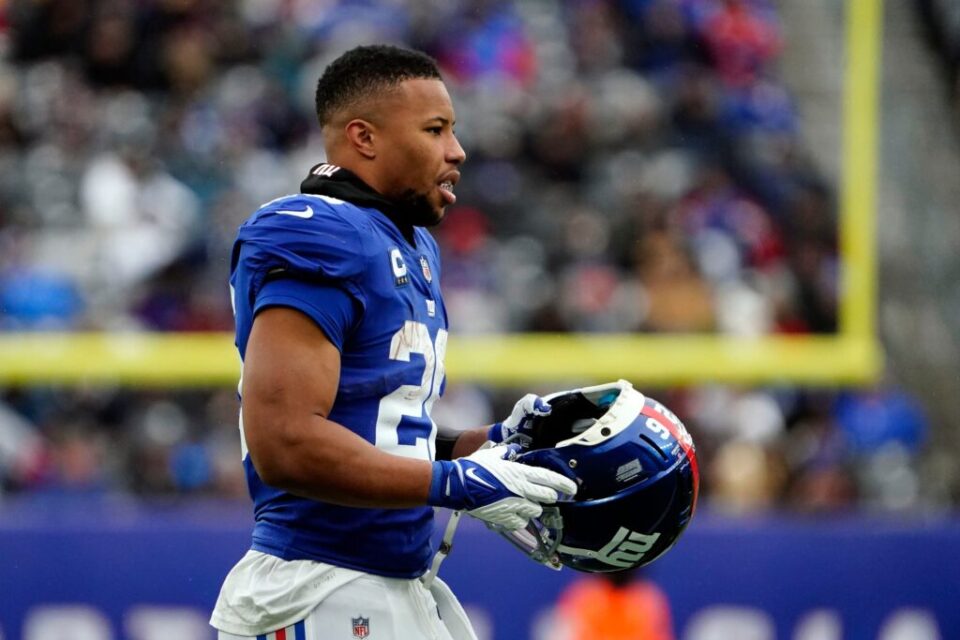 One of the most talented running backs in the NFL and fantasy football, New York Giants RB Saquon Barkley projects to be an early pick once again as his 2022 fantasy outlook rivals the top players in the game. With the NFL season and fantasy drafts closing in, what is Barkley’s fantasy outlook in 2022, and could he prove to be a value at his current ADP in fantasy football drafts?

Anyone who says they can 100% tell you what will happen with Barkley is a snake oil salesman. He might be the biggest enigma of the 2022 fantasy football season. When healthy, Barkley is electric and could even be considered a top-three RB in the NFL based on talent. The problem is Barkley’s glory days came in 2018, and since then, it’s been brutal for those who continued to buy in on his upside.

18 of 43. 41.8%. That is how many games Barkley has missed over the last two seasons. After missing three games in 2019, Barkley entered 2020 coming off a second-straight 1,000-yard season and ended the regular season as hot as anyone, averaging 108.4 yards in his final four games. Yet, just two games into the 2020 campaign, Barkley tore his ACL after 25 total touches. His season was over.

This carried into last season. Most players who come back from an ACL tear will say while they might be medically cleared, it can take multiple seasons to genuinely feel back to where they were pre-injury. So personally, it was not surprising to see Barkley struggle. He needed to trust his knee again. Are 162 carries for 593 yards and two touchdowns making anyone happy? Of course not. But it was unrealistic to assume Barkley would be ripping off 100-yard games out of the gate.

Now almost two calendar years removed from the initial injury, Barkley is on a redemption tour. And according to Barkley via Josina Anderson of CBS Sports, things have felt different in camp under new head coach Brian Daboll.

“It feels like a fresh start. I feel good again. I know it’s all there — I know how talented I am. Just taking it one day at a time. You feel the energy out here doing different things.”

Barkley also noted he expects to be receiving the ball more in 2022. This should make fantasy managers perk up in their chairs. Given the value of targets, Barkley’s value could quickly reestablish itself. The disappointment of last season masked what was a productive year for Barkley out of the backfield.

Despite a cautious start to the season, Barkley ended the year 13th in RB targets with 57, recording 41 receptions for 263 yards and two scores. Barkley is at his most dangerous in space. The easiest way to do this is through the passing game. Get him in the flat and let Daniel Jones target him. It’s quick, simple, and efficient.

The term “injury-prone” is tossed around with Barkley. It’s the last thing you want to be associated with a player on your fantasy squad. And to an extent, there are some. But some guys are just simply unlucky. For me, that’s Barkley. In 2019, he had his ankle stepped on in Week 5 against Dallas, and it swelled up like a beachball on the sidelines. That’s not on him. Then in 2020, it was the ACL. These are not reoccurring hamstring or other soft-tissue injuries. Sometimes, guys just get unlucky.

For me, Barkley came back too soon in 2019, and I even stated that back then but said he could be a league-winner once healthy. The inefficiency last year is due to the ACL. I don’t want to make it more than what it is. Sometimes the simple explanation is the correct one.

Barkley is similar to Christian McCaffrey in 2022. Whether or not you are in on them comes down to if you feel they can play in 14 or more games. If Barkley stays healthy, he will see all the volume he could want. Sure, Daboll and the Bills were pass-happy, but that came after Buffalo had an elite Josh Allen under center. Before Allen was, well, Allen, Daboll’s offenses were inside the top six in rush attempts in five of his six seasons as an OC. They were top 10 in rushing yards in four of those seasons too. It’s not like Jones is anywhere near Allen’s status, so I do expect a more rushing-forward approach in 2022.

We know the volume will be there for Barkley as long as he is healthy. He is a 215-240 touch RB with no competition for touches which could also bring in 50 or more receptions. To find that level of opportunity in the third round doesn’t happen. While I am not comfortable with Barkley as my RB1, as an RB2, sign me up. I’ll take the ADP discount and bet on Barkley bouncing back in 2022 for fantasy.

The Giants’ backfield is a significant question behind Barkley. Devontae Booker, who saw 145 carries in 2021, walked in the offseason and is a free agent. The only signing the Giants made was a one-year deal with Matt Breida. Gary Brightwell is on the roster and should be in competition for the RB2 role.

The name for me to keep an eye on — if he makes the 53-man roster — is Jashaun Corbin out of Florida State. Yes, he is a UDFA, but Corbin is very talented and played behind one of the worst offensive lines in college. It’s the same one that plagued Cam Akers when he was with the Seminoles.

The Giants have plenty of playmakers, especially at receiver. Kenny Golladay, Sterling Shepard, Kadarius Toney, Wan’Dale Robinson, and Darius Slayton all have different upside levels. The question is, can they stay on the field? This was the NFL’s version of a MASH unit last season with how often they were all on the injury report.

Thankfully, New York should have an improved offensive line in 2022

It should surprise no one who watched last season or just looks at the stats when I say the Giants’ OL was subpar. According to Football Outsiders, they were 31st as a unit in run blocking and adjusted line yards (3.74). They were 29th in stuff rate at 17%. Stuff rate is a metric that details the percentage of runs where the running back is tackled at or behind the line of scrimmage.

Due to this, it should come as no surprise the Giants focused on improving the offensive line in the offseason. New York went out and signed guards Mark Glowinski, Jon Feliciano, Jamil Douglas, and tackle Matt Gono to help solidify the unit.

While none are elite, the overall quality of the line did improve. They will join LT Andrew Thomas and RT Evan Neal, the No. 7 overall selection of the 2022 NFL Draft.

With an ADP of 24, Barkley is coming off the boards as the RB14 in PPR formats at the moment, placing him right at the end of the second round in 12-team fantasy leagues. However, given his talent and upside, you’ll see him go before this fairly often in drafts. Don’t be shocked if this rises by the time you draft.

In PFN’s 2022 fantasy football rankings, Barkley comes in a bit higher due to the hope he returns to form as the RB11 and 17th overall ranked player, moving him closer to a mid-second round pick. I have him just a smidge higher as my RB10 and 16th-ranked player.

Sure, you need to manage risk in fantasy drafts, especially early on; however, we don’t typically draft players expecting them to not be healthy. Otherwise, what’s the point? I don’t project a single RB to play in all 17 games as it’s generally not realistic. Dings and knicks happen, and it’s a part of playing football.

If you believe Barkley can play in 14 or more games in 2022, take the leap and draft him confidently. From a point-per-game standpoint, which is a better way to value and assess players than a total score standpoint, Barkley has as much upside as anyone. While I do prefer him as a massive upside RB2 to pair with someone like Alvin Kamara or D’Andre Swift, I have no issue with Barkley also as my RB1 if I went with Justin Jefferson, Ja’Marr Chase, or even Stefon Diggs in the first.

At the end of the day, I want as many championship-caliber players on my roster. Barkley is one of the few who can be placed in that category so long as he stays on the field.