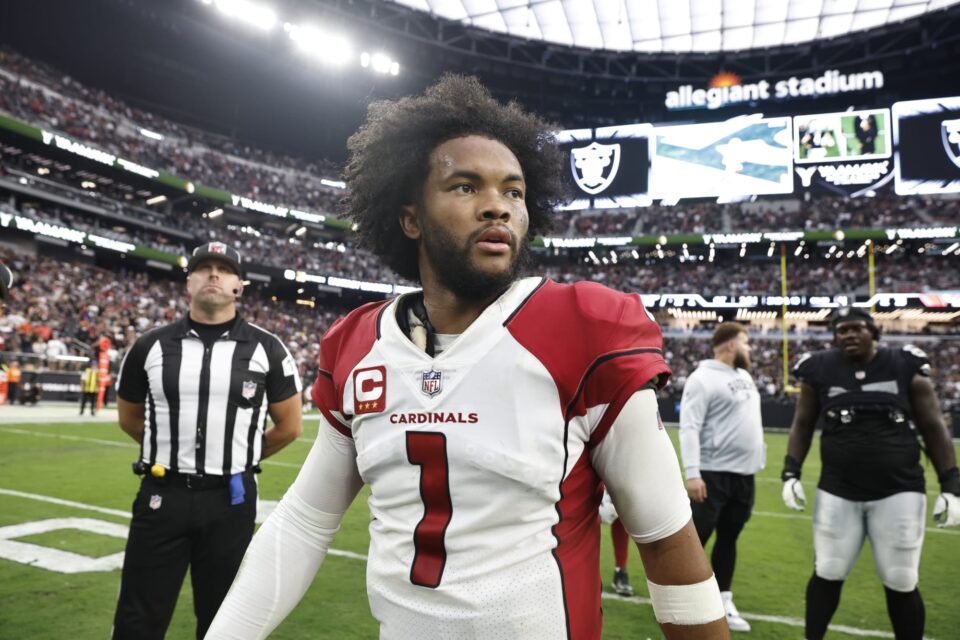 Las Vegas police are investigating allegations that a fan struck Arizona Cardinals quarterback Kyler Murray in the face immediately following the Week 2 game against the Raiders.

One of the more exciting games of Week 2 was the Arizona Cardinals taking on the Las Vegas Raiders. Cardinals quarterback Kyler Murray brought back the team back from a 20-0 deficit to force overtime, where they ultimately won 29-23 on a fumble recovery touchdown by cornerback Byron Murphy Jr.

But there is some fallout after the game.

Las Vegas police are investigating allegations that a fan struck Murray in the face with an open hand. The incident allegedly occurred when Murray was celebrating with fans sitting at field level at Allegiant Stadium after the game.

The slow motion video of the incident comes courtesy of Pro Football Focus’ Ari Meirov. Credit for the original video goes to Cameron Cox of 12 News in Arizona.

Here’s a slowed down version of what happened between Kyler Murray and a fan after Sunday’s game in Las Vegas: Keep an eye out around the 16-second mark.

Great work by @CamCox12 who captured the entire ending on video.

According to the Associated Press report, officer Larry Hadfield, a spokesperson for the Las Vegas police, said that a battery complaint was filed at 6:30 p.m at the stadium. Hadfield said that the allegation was “a spectator at the stadium struck a professional football player.”

The investigation is ongoing, per the Associated Press, and that no suspect has been named.

Murray helped the Cardinals avoid an 0-2 start to the season with his incredible play-making ability at the end of the game. He helped deplete their deficit to 23-15 on an insane run on a two-point conversion attempt. Murray then scored a rushing touchdown, and hit A.J. Green in the back of the end zone on a successful two-point attempt at the end of regulation to force overtime.

In the game, Murray completed 31-of-49 pass attempts for 277 yards, one touchdown, and one interception, while running for 28 yards and a touchdown on five carries.