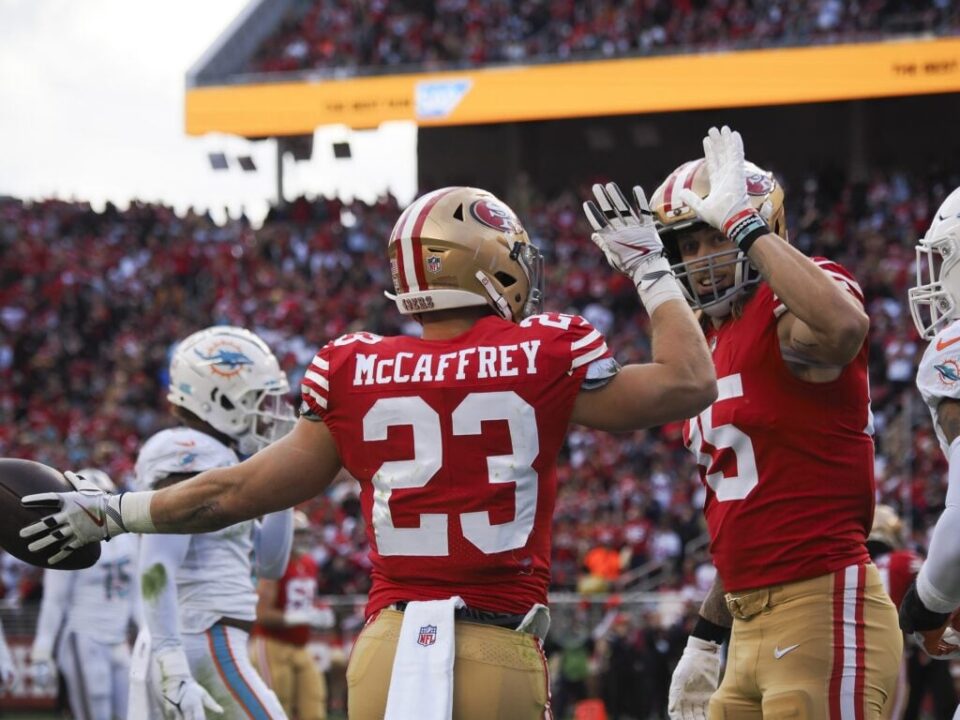 The RB injury report for Week 14 may not be loaded with names, but there are some key fantasy football contributors among the latest updates. Let’s take a look at the news from around the NFL on Wednesday and examine the fantasy implications of injuries to the likes of D’Andre Swift, Christian McCaffrey, D’Onta Foreman, Kenneth Walker, Najee Harris, and more.

If you drafted D’Andre Swift for fantasy this year, seeing his name on the injury report has got to be very frustrating. Swift is back as a limited participant at practice on Wednesday, this time with another ankle issue.

Based on his history, this could go either way. We could see Swift back at practice Thursday or Friday and playing as normal, or we could see him heading back toward being inactive. Therefore, this is one that fantasy managers will need to watch keenly over the coming days.

Swift was coming off a 14-carry game with 62 yards and a touchdown. He also added 49 yards on four receptions from six targets. His 20 opportunities were a season-high, while his 18 touches were tied for a season-high with Week 1 when he first suffered an ankle injury.

If Swift misses the game, it is another boost to Jamaal Williams’ fantasy ceiling. If Swift plays, there is every chance he could be limited to 10 or fewer touches, making him a frustrating fantasy option this week. This injury does make Swift an interesting Underdog Fantasy Best Ball value. It should depress his value, but he always has the potential for big plays on the field.

Coming off the Panthers’ bye week, it was a surprise to see D’Onta Foreman as a non-participant with a foot issue. However, head coach Steve Wilks told reporters he is not too concerned about Foreman’s status for Sunday. Although, Wilks did add that he does not know if Foreman will practice Thursday, so fantasy managers should be prepared for that potential.

Foreman told reporters after practice that he is 95% sure he will be available for Sunday. He also added that he thought the foot injury was caused by the turf at Bank of America Stadium.

It seems like Foreman should be fine for Sunday, but we will likely know more on Friday when we see his end-of-week status and hear from Wilks again. The situation is a little frustrating because the matchup for the Panthers RBs against the Seattle Seahawks is a good one. Therefore, if Foreman is limited entering the game, it will be tough to trust any of the options.

If Foreman were to miss the game, Chuba Hubbard would be the option that fantasy managers could look to.

After Kenneth Walker III suffered an ankle injury that head coach Pete Carroll referred to as a strain rather than a sprain, the rookie RB was a non-participant to open practice this week. That leaves his game status for this weekend very much up in the air in what is a convoluted situation in Seattle.

If Walker plays, there is a solid matchup against the Panthers to exploit, but the young back has struggled in recent weeks. However, if he ends up entering the game limited, it could be tough to trust his workload enough to put him in fantasy lineups.

The injury situation for DeeJay Dallas has been described as more of a ligament high-ankle issue, but we do not have an exact update on what the injury is. Yet, he was also a non-participant to open practice this week.

If Dallas and Walker were out, Tony Jones and Travis Homer would be the main two backs for the Seahawks. They also have some depth on their practice squad, so they could elevate one of those two options to be the third-string back.

Najee Harris is starting the week on the Steelers’ injury report as a non-participant once again. Harris is listed with the oblique issue that cost him two practice sessions last week. If he follows the same pattern this week, Harris will be held out Thursday before practicing in a limited fashion on Friday and suiting up Sunday.

Last week, Harris carried the ball 17 times for 86 yards and added six yards on a reception. It was his most efficient game of the year in terms of yards per attempt, so the injury does not appear to have affected him too much. If Harris did end up missing the game, Jaylen Warren would likely be the biggest benefactor from a fantasy point of view.