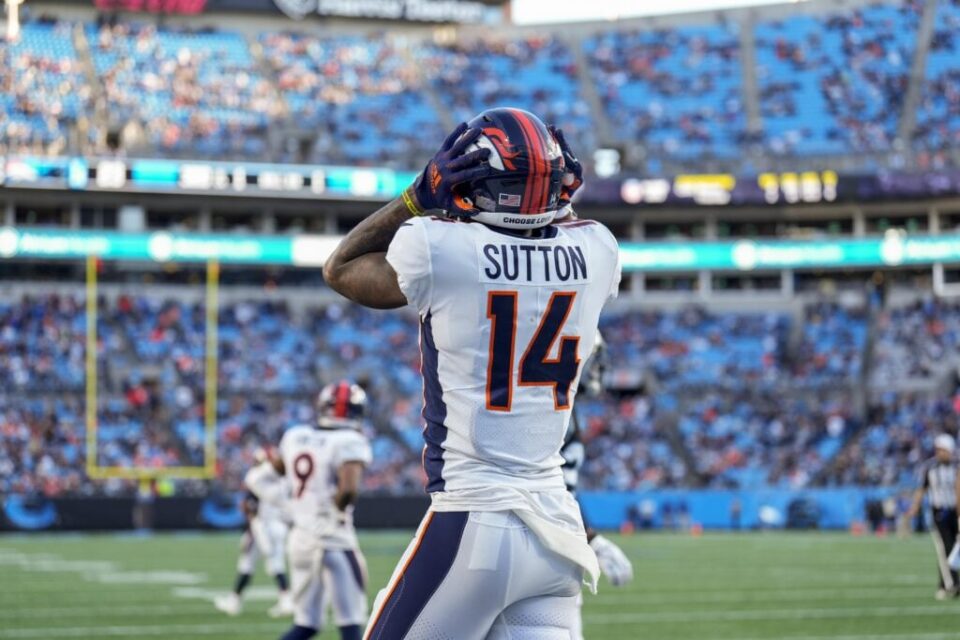 While the Week 14 WR injury report may not be the most star-studded list, there are still players with significant fantasy football impacts to consider. Let’s look at the latest updates and fantasy implications as the likes of Deebo Samuel, Courtland Sutton, Mike Williams, Diontae Johnson, and more deal with injuries this week.

As he continues to recover from his deep thigh bruise, Samuel was limited to open practice in Week 14. The WR was able to play through the injury last week and is not expected to be in danger of missing the game. He should be closer to 100% this week, making him a better proposition for fantasy.

Samuel has not always been the weapon we hoped he would be this season, but with six teams on a bye, it will be nearly impossible not to start him this week.

While there was some positive news for Sutton regarding his hamstring issue on Monday, that news was less positive on Wednesday. The WR avoided a major injury, but head coach Nathaniel Hackett said, “it’s not looking good for him this week” when asked about Sutton’s availability.

It would be a surprise to see Sutton active on Sunday. That would leave the Broncos’ passing game very short on options again. Last week, they at least got Jerry Jeudy back, but we saw Greg Dulcich getting work lined up as a receiver. Outside of those two, there is limited value to be found in Denver this week.

With a nice matchup against the Chiefs in terms of fantasy points allowed to outside pass catchers, Jeudy and Dulcich could be intriguing Underdog Fantasy Best Ball options this week. Trusting the Broncos’ passing attack in standard leagues is tough to do, but in Best Ball formats, the risk is significantly reduced.

It looks as though Jeudy should be available again this week for the Broncos. He opens the week limited after suiting up in Week 13. This offense limits his upside, but he should be more effective another week removed from the ankle injury.

There was finally some positive news for Mike Williams’ fantasy managers, as the WR was listed as a limited participant on Wednesday. It is worth noting that the Chargers only held a walkthrough, so this is an estimated report, but it is still a positive sign.

Unfortunately, the risk of re-injury likely remains high if Williams does end up back on the field this week. Alongside that risk, it is also likely that Williams will be on a limited snap count. The trio of DeAndre Carter, Josh Palmer, and Keenan Allen has done a solid job, so they do not need to rush Williams back to a full load.

Diontae Johnson was somewhat of a surprise on the Steelers’ injury report. The WR is dealing with a hip injury, which is something he managed for a couple of weeks earlier in the season. On both of those occasions, Johnson was, at worst, a limited participant in practice before being upgraded as the week went on.

There does not appear to be any major concern that Johnson will not be available this week. His status is one to keep an eye on as the week progresses, but he should be out there, as usual, barring a setback.

For the most part, illness designations turn out to be nothing of significance come game day. However, they are always worth noting simply for when they do buck that trend and have an impact. We saw Davante Adams struggle for a full week with an illness earlier in the year, so it can impact fantasy output.

Davis had a big game last week as he returns from injury and has a nice matchup this week. If he plays, he is an intriguing starting option against the Bills. If Davis is inactive, Elijah Moore could be the biggest beneficiary.

After being a late-week downgrade and ultimately inactive last week, Brandin Cooks opens the week as a non-participant on Wednesday. As the veteran WR deals with a calf injury, it seems unlikely the Texans will rush him back.

With Houston already eliminated from playoff contention and Cooks’ contract guaranteed next year, there is little to be gained for the team by pushing back on the field before he is fully healthy.

In Cooks’ absence, Nico Collins stepped up and took a bigger role. Therefore, it is frustrating to see Collins as a non-participant on Wednesday with a foot issue. When he spoke to the media, Lovie Smith called Collins “limited,” but it seems even that was optimistic.

This will be a player that we need to monitor throughout the week. If he plays and Cooks does not, then Collins can be a volume-based starting WR option for fantasy. However, if he is out, it is tough to know which Texans WRs can contribute for fantasy managers outside of the deepest leagues.

It is not a huge surprise to see Treylon Burks as a non-participant on Wednesday due to a concussion. Burks left the game Sunday after a nasty-looking hit on a touchdown catch and did not return.

Rarely do we see a player who is absent on Wednesday with a concussion get cleared for the following week. There is still a chance that Burks will suit up, but it is slim. If he misses the game, there is no clear fantasy-relevant option among the pass catchers on this offense.

For the second-straight week, Zay Jones is listed as limited to open practice with a chest injury. He ultimately suited up last week but did not seem to be 100% during the game. Hopefully, Jones can get fully healthy this week because the matchup with the Titans is a juicy one for opposing WRs.

Kadarius Toney returned to practice in a limited fashion to open Week 14, giving him a shot to play this week. In his media availability, head coach Andy Reid said he is “going to let him get out there and work a little bit.” He added that they would not rush him back “and have him hurt it again.”

That would suggest that even if Toney is active, his role would be very limited in Week 14. If he does start, it will be hard to trust Toney in fantasy lineups.