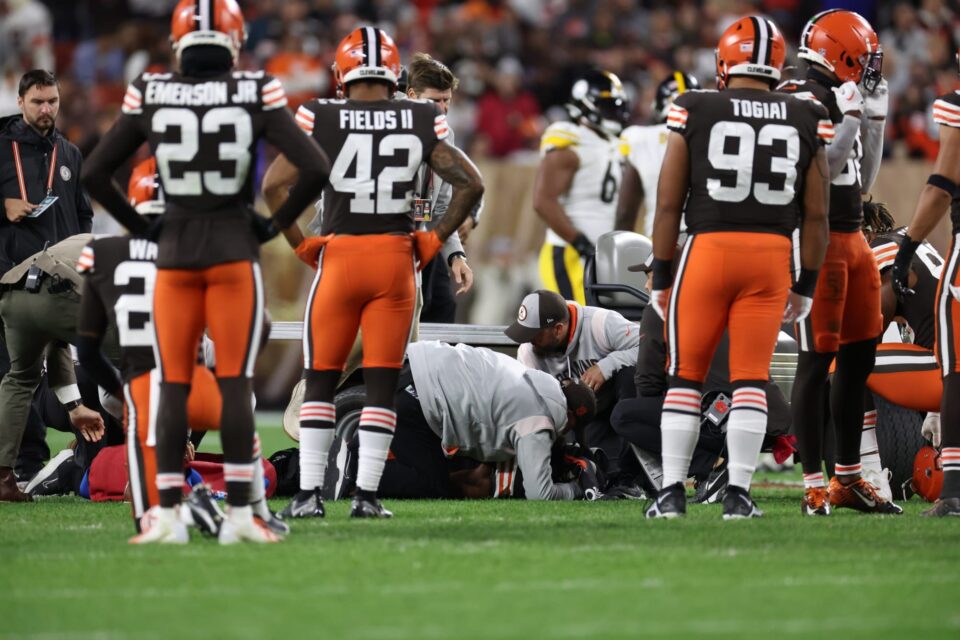 Cleveland Browns fans were not happy about a hit that forced linebacker Anthony Walker Jr. to be carted off the field due to injury.

The Week 3 edition of Thursday Night Football featured the e hosting the rival Pittsburgh Steelers. There is no love lost between either teams, and fans are emotionally invested in the game. Unfortunatley, there was an injury on a questionable play.

In the third quarter, Browns linebacker Anthony Walker Jr. was shown face down on the field. On that specific play, Walker was hit in the helmet by Steelers offensive tackle Chukwuma Okorafor’s arm. Walker fell down, and as he was on his stomach, Okorafor jumped onto his back.

Walker’s teammates stood alongside him as he was treated by training staff. He was loaded onto the cart, but with an aircast on his left leg.

Twitter reacts to hit that led to Browns LB Anthony Walker Jr. being carted off

Browns fans, and those who were watching the game, did not believe the play that injured Walker was a clean one.

Guess flopping down on Anthony Walker is totally legal.

Just another day in Cleveland.

Walker got his leg stepped on while he was on the ground, and the #Steelers should have been penalized for jumping on Walker while he was down. How did the refs miss that?

A dirty hit by Okorafor… Feel awful for Anthony Walker.

Yet another dirty hit from a Steelers player 😡

No idea how that hit on Anthony Walker Jr. wasn’t a penalty.

They just showed what happened. Chuks Okorafor blocked Anthony Walker Jr., then jumped on him after he was already on the ground. Dirty, dirty play. No call for that whatsoever. Walker seemed to be in good spirits as he was carted off.

Walker was quickly ruled out by the team with what was described as a knee injury.

Okorafor was penalized for an ineligible downfield pass, leading to no play and a loss of five-yards. There was no penalty called on the hit on Walker.

Prior to his exit, Walker had recorded two total tackles and four assisted tackles. Through the first two weeks of the 2022 season, Walker posted seven combined tackles, three tackles for loss, and two defended passes.

It will remain to be seen what kind of knee injury Walker is dealing with, and how much time he may miss. The injury does sting, as he is the team’s defensive play caller when on the field.