Another 4-TD Day for Joe Mixon? 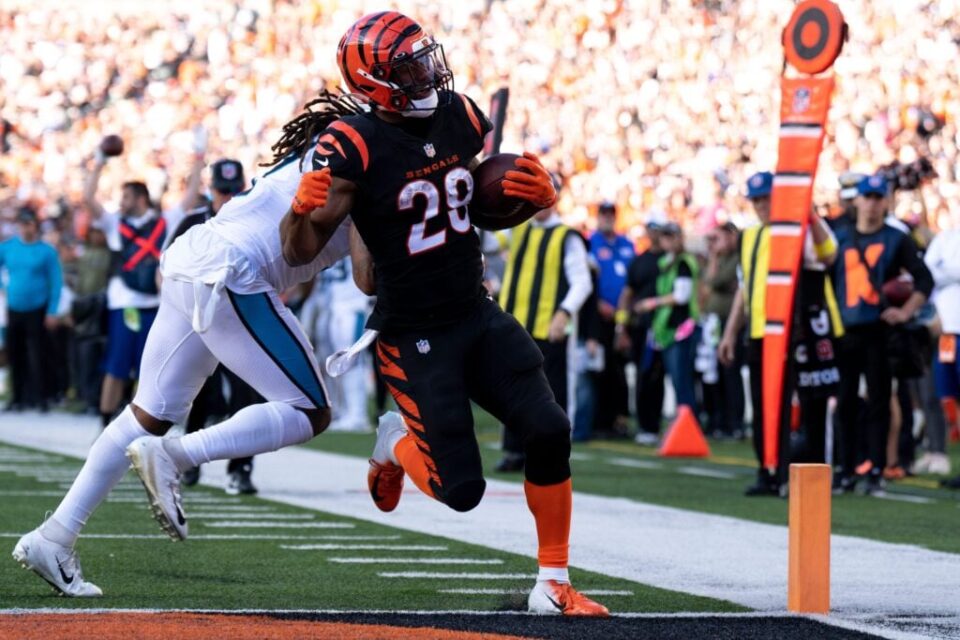 We’ve analyzed the game’s highest-probability scripts to assess the most likely outcomes, including which players are in line to thrive more than anticipated and which could fall short of expectations. All prop bets are based on DraftKings Sportsbook, BetMGM, or FanDuel Sportsbook, where you can get a no-sweat first bet up to $1,000.

In my fantasy league last week, I started Kenny Pickett over Justin Herbert. Not sure if that says more about my troubled fantasy team, or about Herbert’s troubling (and injury-plagued) season.

Or maybe there’s a third answer. Pickett is really good. He still makes plenty of rookie mistakes. But we can see how this first-round pick could develop into an NFL star.

When he threw for over 300 yards against the Bills in October, Pickett became only the second QB to accomplish this feat since the start of the 2021 season. Even with Chase Claypool gone, he has the receivers to pressure secondaries. And if his backfield can build on their Week 10 success . . . well, we can see glimmers of excellence.

Superb Cincy cornerback Chidobe Awuzie is out for the year, and DJ Reader remains sidelined. There’s an opening for Pickett to pick apart (bad pun intended) a defense that most recently gave up 38 combined points to the Falcons and Panthers, as well as 32 to the Browns.

You might have noticed I’m recommending the under on Pickett’s passing yards, despite my bullishness about his other numbers. That’s because I’m expecting Pittsburgh to establish the run to keep Cincy’s vaunted offense off the field. It worked Thursday night for Tennessee, and it worked this past Monday for Washington.

Easier said than done? Always. But I’m trusting that the Steelers’ Week 9 bye gave them time to right the ship. Despite his struggles, Najee Harris remains integral to this franchise’s success in 2023 and perhaps 2024.

Meanwhile, Jaylen Warren isn’t going anywhere. What a terrific story for a 24-year-old rookie who only a few months ago was an undrafted free agent.

Warren has dominated on the ground to the tune of 5.0 yards per carry while catching 12 passes in his last five contests. Warren’s a great hedge if Harris is only “good” in this game, and he also could easily exceed prop expectations even if Harris thrives.

Where’s the respect for George Pickens? Sure, the rookie hasn’t been the most reliable producer. But some of that is situational.

For example, Pickens has three performances with more than three receptions (he happened to have six catches in all three). These all culminated in losses. More was expected of Pickens and the passing game in general.

But in the Steelers’ two wins with Pickett at the helm, Pickens has averaged only three catches for 30 scoreless yards. The Steelers attempted only 30 passes in each contest.

The thing is, with Claypool gone, Pickett doesn’t need to throw more than 30-35 times for Pickens to surpass 40 yards most weeks. Pickett will choose his moments to throw — or the moments will force him to throw. Either way, Pickens is a great bet for at least four catches for 45+ yards.

Two weeks ago, Joe Mixon nearly became the top single-game fantasy-scoring RB in history. He catapulted into the No. 2 fantasy RB position, right behind Austin Ekeler.

What will he do for an encore? Well, let’s consider that he struggled on the ground heading into his Week 9 blow-up. He’s still outside the top 40 with a measly 1.4 yards after contact.

Facing the Panthers at home isn’t the same as confronting Pittsburgh on the road. The Steelers have one of the league’s stingiest run defenses (4.1 yards per carry).

If Week 9 signaled a return of “great” Mixon, then of course, he can continue dominating. But assuming Pittsburgh works the clock far better than Carolina did and that their defense holds firm, I’m foreseeing a disappointing day for the Bengals’ bell cow.