Von Miller Out for Year — Are Buffalo Bills’ Super Bowl Hopes Finished Too? 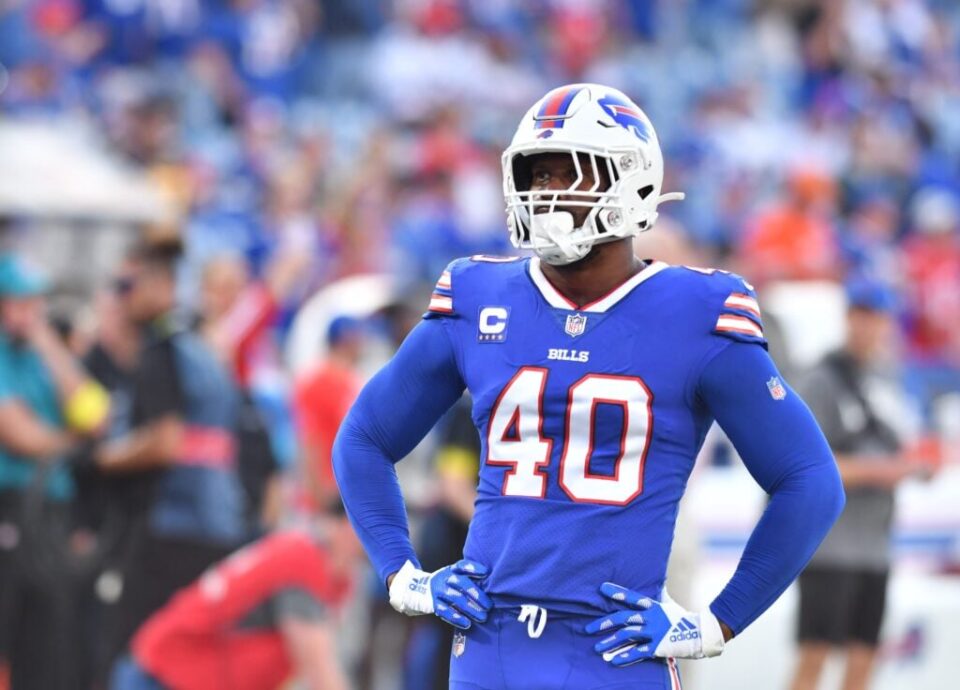 Although the Buffalo Bills placed Von Miller on injured reserve following his Thanksgiving Day knee injury, they were hoping he could return for the postseason. But that won’t be the case, as head coach Sean McDermott announced Wednesday that Miller has undergone surgery for a torn ACL and will miss the rest of the year.

The Bills just reclaimed the AFC’s top seed following the events of Week 13, but their Super Bowl odds look much dimmer following the loss of their future Hall of Fame pass rusher. How will Buffalo account for the loss of Miller as they enter the stretch run?

The Bills had become known for methodically building their roster, adding modestly priced free agents each offseason instead of taking home-run swings. That changed this year when general manager Brandon Beane and his staff targeted Miller, signing the 33-year-old to a six-year, $120 million extension with the hope he’d be the final piece on a Super Bowl-caliber squad.

Through 12 weeks, Miller had certainly been worth the money. He posted eight sacks and 12 tackles for loss while ranking seventh in ESPN’s pass-rush win rate. Despite missing part of Week 12 and all of Week 13, Miller still ranks 12th among edge rushers with 45 pressures, per PFF.

Miller is an absolute force, the type of player that opposing offensive coordinators and offensive line coaches have to design game plans around. Losing him is an incredible blow to Buffalo’s defense and creates second-order effects for the rest of the Bills’ front.

Miller and defensive tackle DaQuan Jones are the only members of Buffalo’s defensive line that have played more than 50% of the team’s snaps. This defense relies on a wave of pass rushers to get after the quarterback.

Former early-round draft picks like Gregory Rousseau, Boogie Basham, and A.J. Epenesa will be required to step up in Miller’s absence. Not only that, but they’ll be asked to take on more responsibility without the gravity of Miller affecting protection schemes on the other side of the line.

Opposing offensive lines won’t have to calibrate their focus on Miller, making his replacements’ jobs even more challenging.

How Does Miller’s Injury Shake Up the AFC Playoff Race?

The Bills won in Week 13 while the Chiefs lost, so Buffalo is back atop the AFC. FiveThirtyEight gives the Bills a 46% chance to earn a first-round bye. Kansas City is at 39%, and no other AFC team is above 10%.

But Buffalo isn’t even a lock to win the AFC East. They’re just one game ahead of the Dolphins, but Miami currently holds the head-to-head tiebreaker. The Bills must play all three of their AFC East opponents one more time down the stretch.

All told, Buffalo has the NFL’s eighth-most-difficult remaining schedule, according to Football Outsiders (Kansas City has the second-easiest). In addition to facing the rest of their division, the Bills will have to play Joe Burrow and Justin Fields without Miller in tow.

The Bills are in danger of losing the No. 1 seed and could cough up the AFC East lead. Things won’t get any easier once they reach the postseason, as they’ll likely have to face some combination of the Chiefs, Bengals, Dolphins, Jets, and Ravens if they are to reach the Super Bowl.

Along with Josh Allen and Stefon Diggs, Miller was one of three players the Bills couldn’t afford to lose. With Miller sidelined, the onus again falls on Allen, Diggs, and offensive coordinator Ken Dorsey to produce even more explosive offensive results to offset any decline from a now Miller-less defense.