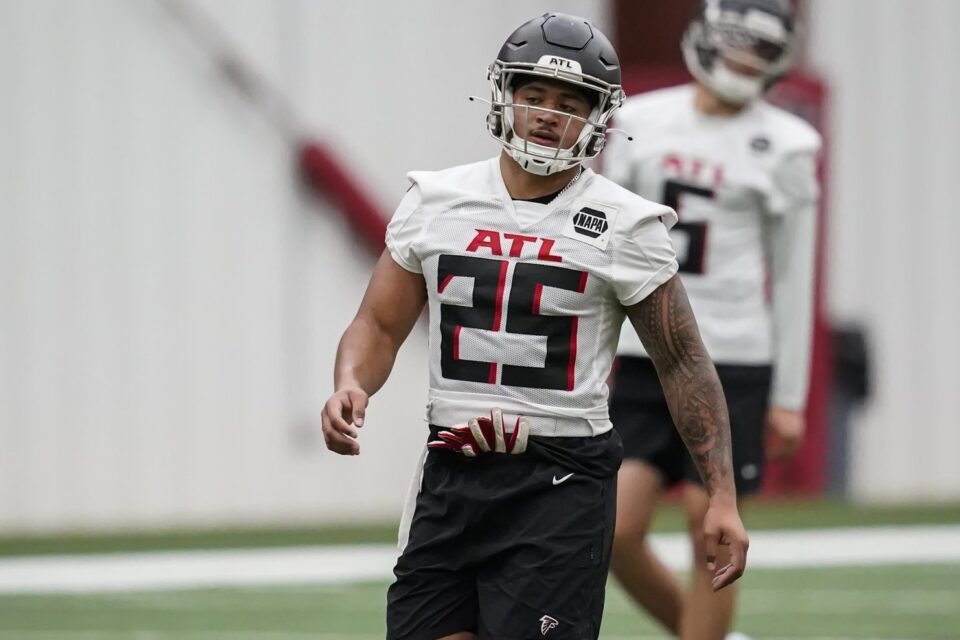 The Falcons are a team trying to find their identity amid a rebuild. Head coach Arthur Smith wants an offense that can control the tempo via the run, similar to what he did while a part of Tennessee. The problem is they don’t have a Derrick Henry. In fairness, no one does outside of the Titans, but the Falcons desperately needed someone who can take carries and get the dirty yards.

This is where Tyler Allgeier comes into play for fantasy in 2022. Atlanta drafted the brushing rusher with the 151st pick of the 2022 NFL Draft. Listed at 5’11” and 220 pounds, Allgeier plays a physical brand of football. When you see his background, it’s easy to see why. A former linebacker converted to RB, Allgeier meets people in the hole with violence.

After a 1,300-total-yard season in 2020 (11 games), Allgeier put up silly numbers in 2021. He rushed 276 times for 1,606 yards (No. 3 in the nation) with an NCAA-best 23 touchdowns. He even hauled in nearly 200 yards as a receiver and had the fourth-most receptions on the team (28). Accounting for 2.09 YPTP (yards per team play), Allgeier was one of the most efficient backs in the nation despite the majority of his work coming between the tackles and into the muck.

There was talk of Allgeier running in the 4.4-4.5 range at the Combine, making his 4.64 40-yard dash a bit disappointing. But that’s more than enough for what his role is intended to be, which is a between-the-gap rusher who shouldn’t be trying to hit the edge.

Allgeier will be in a rotation with Cordarrelle Patterson and lose the bulk of the receiving game to him. However, Allgeier could easily lead the team in carries. But even if he hits the 180+ carry range, the lack of scoring chances and passing utilization cap his upside. He is a low-end RB4 for 2022, barring a shakeup on the depth chart via an injury.

Atlanta is going to struggle in 2022. That’s putting it mildly. They rival the Bears for one of the worst rosters in the NFL, and it’s reflected in their 4.5 win total. Gone is the face of the franchise QB Matt Ryan. Taking his place is Marcus Mariota, who is looking to become a starter and hold off rookie Desmond Ridder.

Both QBs, even if we see Ridder, are more mobile than Ryan. Sure, that’s not saying a lot, but it does equal rushing opportunities for them and not for an RB. Yet, no player on the depth chart will impact Allgeier more than Patterson.

The RB9 in 2021, Patterson was the do-it-all player for the Falcons, who lacked any playmakers not named Kyle Pitts. Patterson saw nearly as many touches last season (205) as he had in his four previous years combined (220). Of those touches, 31.1% came via the air (69), accounting for 58.1% of his fantasy points per game (8.55). That’s where his value is for fantasy football.

For fantasy purposes, he is Atlanta’s RB1. But he seemed to wear down as the season ended. From Weeks 14-18, Patterson averaged just 2.62 yards per carry. While he averaged 2.95 yards after contact per attempt on the year, that bottomed out at 1.56 over the final four weeks.

No question Patterson has skills, and on an offense that lacks playmakers, he’ll be involved. The question becomes how much they will involve him in the rushing game as that directly conflict with what Allgeier was brought in to do. I can understand Patterson as an RB3 in PPR formats but do not expect the same season as a year ago. In most cases, I prefer to stay hands-off from this backfield and look for better situations in far better offenses.

With an ADP of 181, Allgeier is coming off the boards as the RB53 in PPR formats at the moment, placing him towards in the early parts of the 15th round in 12-team fantasy leagues.

In PFN’s 2022 fantasy football redraft rankings, Allgeier is the RB54, as the 136th ranked player. I am slightly lower on Allgeier. He comes in as the RB55 in my rankings and 151st player overall.

At his current ADP, there is no risk involved when drafting Allgeier. I mean, it’s the 15th round, for crying out loud, and he could very likely lead the team in carries. He is a solid bench depth RB you can play in a pinch that can see in the ballpark of 10-14 opportunities. You won’t find another RB in the same range you can say the same thing about, as most are RB2/3s for their teams.

The problem is Allgeier has little upside because he plays for one of the worst offenses/teams in the NFL. A running back who is unlikely to see any targets and lacks in red-zone or goal-to-go carries isn’t going to bring a lot to the table for fantasy. As an RB5, have at it. But he is not someone I would want to rely on weekly.