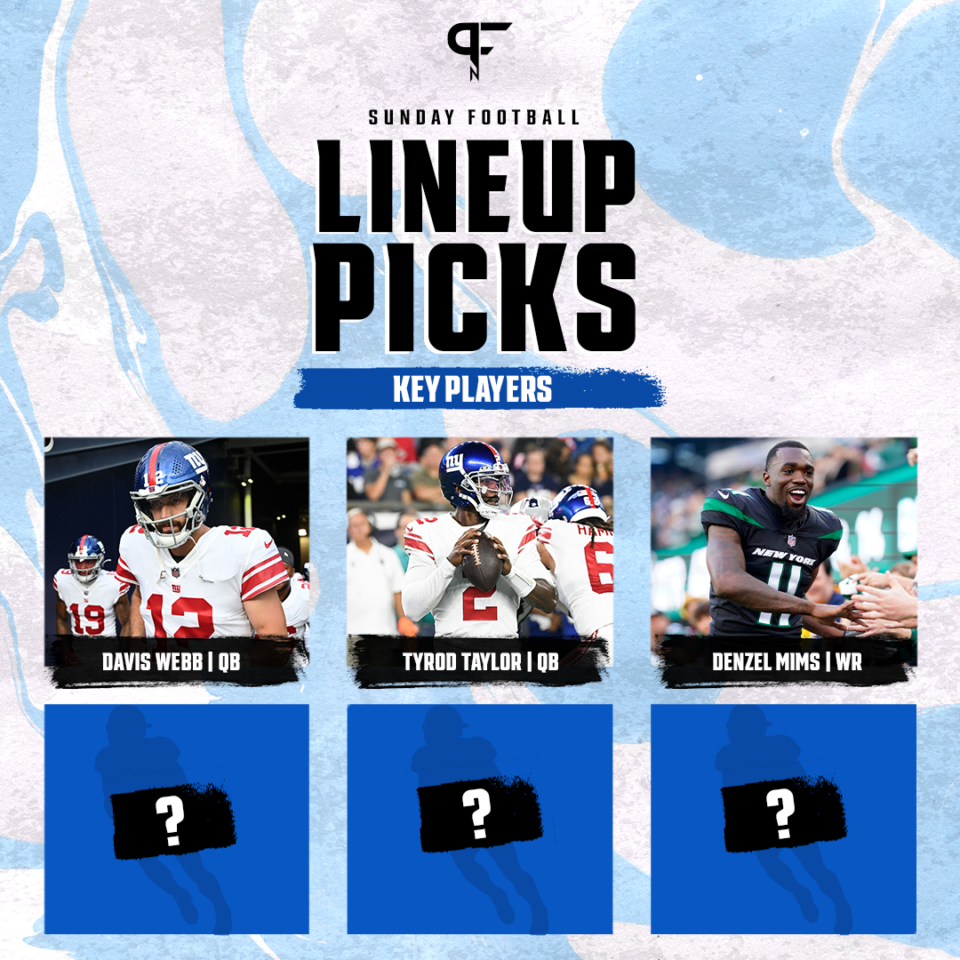 If you’re making NFL DFS picks for Sunday’s Jets vs. Giants matchup, you’ve come to the right place. Although it’s always challenging to anticipate preseason snap counts, we’ve analyzed each team’s expectations and run through dozens of realistic scripts for today’s contest to provide seven recommended highest-upside targets that you might incorporate into your fantasy football tournament or 50/50 strategy.

Today we’re playing a DraftKings “Showdown Captain Mode” tournament that includes one player who earns 1.5 times his scoring output, plus five Flex players. All preseason prices are set at $7,600, while the Captain slot costs $11,400, meaning any combination of six players falls comfortably below the salary cap.

As of early Sunday morning, it remains unclear whether the Giants will play any of their offensive starters today. They’ve been practicing with the Jets this week, and many key starters played in the first two preseason games, suggesting that the coaching staff probably has seen enough. So assuming Daniel Jones plays somewhere between “a little” and “not at all,” that would leave Tyrod Taylor and Davis Webb to carry the load.

If you’re using a Captain slot (or MVP slot for similarly designed FanDuel contests), I suggest putting Webb there. First, and most importantly, QBs have been safer DFS bets this preseason, particularly those who play at least 1.5 quarters. Webb could see a full half of work and possibly a little more if the team limits Taylor to 15-25 minutes of game action. So Webb is a pure volume play against, presumably, some of the Jets’ deep defensive backups.

Of course, that brings us to Taylor. On the one hand, he could push for a midseason takeover of the starting job if Jones struggles badly (is there any other way to struggle?). At the same time, Taylor is now 33 years old, a step slower than he was in his heyday, and hasn’t performed at a starting-QB level consistently since 2017. There’s sufficient pressure on him to prove he can still be a “good” starter if needed.

The latest reports suggest Joe Flacco could play between a quarter and 1.5 quarters. But if the Giants sit most of their starters, how much value would there be for the Jets to risk injuries to their starters while facing mostly backups? This lineup assumes Chris Streveler and Mike White collectively will play at least two-thirds of the game. Streveler has looked better than White and is a good bet to be the best per-pass producer on the field today.

Against a (perhaps) relatively softer Giants defense, maybe White can turn things around. He’s looked adequate at best in two preseason games, and he’s also fighting to keep a job. And I’m a big fan of betting on people who really want to keep their job. As long as he gets half-decent protection, White could deliver his best showing of the summer.

When a teammate finally follows you on Twitter after playing together for three years, things are looking up. Alex Bachman is trying to avoid getting cut. Collin Johnson recently landed on the injured reserve. The Giants’ overpaid, overinvested receiving corps has been a bust. Can the 26-year-old Bachman carve out a tertiary role in 2022? We’re getting close to that answer. For now, I’d bet on him.

The Jets might be making a conscious decision about Denzel Mims today. The disgruntled receiver wants out. Should the team use him heavily against the Giants, hoping he puts up big numbers to help drive up his trade value? Or should they keep him bubble-wrapped so that he still has trade value? And frankly, what trade value does he have regardless?

I think the Jets have nothing to lose throwing him out there, hoping he gets five catches for 80 yards and a score, and then sending him away for a seventh-round pick. So good luck to Mims, and good luck to all of you as you craft your DFS lineups.