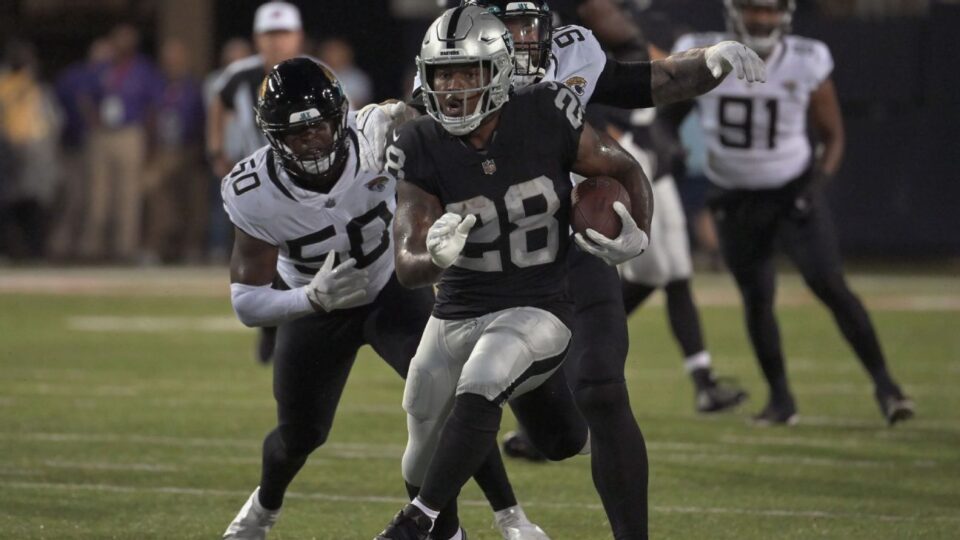 “The happiest person in the building should be Josh Jacobs. I know that.” — Las Vegas Raiders quarterback Derek Carr on the team’s offensive system under new coach Josh McDaniels

HENDERSON, Nev. — Josh McDaniels landed in Las Vegas with the reputation of an elite playcaller, one who leans heavily on a roster of running backs just as big as it is versatile in skill sets.

Indeed, with seven tailbacks and a fullback on the training camp roster, it might be a good problem for McDaniels to have when it comes to cutting down to an initial 53-man roster.

“It’s pretty interesting,” McDaniels said this week when asked about the depth and diversity of the running backs room. “There are some young guys that are learning but play really hard and give great effort. We have some guys that are kind of multifaceted in terms of what they do and bring. We’ve tried to give them all different opportunities here in the first few games to try to do some of those things.”

Case in point: the (relatively) heavy workload Jacobs, a Pro Bowler in 2020 and presumptive starter this season, played in the Hall of Fame Game. Jacobs starting and getting seven touches (five carries for 30 yards and two catches for 14 yards) on the first two series raised eyebrows.

Or veteran Kenyan Drake, who is returning from a broken right ankle, seeing significant time in both preseason games.

“I mean, the proof is in the pudding,” said Drake, who has carried the ball nine times for 24 yards while catching two passes for 17 yards combined, after the Raiders beat the Minnesota Vikings in the second preseason game.

“You see everybody on the field being productive, playing in every and any situation — from four-minute with Brittain [Brown] finishing it off to the two-back set that we have, me and Zamir [White] in the first half, and then, obviously, not to mention the [two] other guys that haven’t played that are going to make a big impact on this team, so the sky’s the limit for this room. I feel like we’re going to be the heartbeat of this team and we’re going to, every game, go out there and be the engine.”

Through two exhibitions, Austin Walter has rushed for a team-high 79 yards with a TD and caught a 3-yard pass, while White, a fourth-round draft pick out of Georgia, has rushed for 65 yards on 16 carries and is tied for the team lead with five catches for 27 yards.

Brown, a seventh-round pick from UCLA, has rushed for 54 yards and a score on 14 carries and caught two passes, while Ameer Abdullah has 7 rushing yards and a TD (his low-high roundhouse kicks followed by a twirl kick as an end zone celebration was a nod to the video game “Tekken” while also serving as inspiration to the kids on “Cobra Kai”) and also has two catches for 23 yards.

Interestingly, neither of the two backs who came from McDaniels’ old stomping grounds, the New England Patriots, have played in the preseason — tailback Brandon Bolden and fullback Jakob Johnson.

How much can you truly glean, though, from two games of a preseason for a new regime?

Well, it’s been a fairly balanced offensive attack this far, with the Raiders passing for a combined 322 yards on 59 attempts and rushing for 299 yards on 72 carries.

All eight backs survived the first round of cuts, from 90 players to 85, this week. The Raiders must get down to 80 players by Tuesday, three days after the exhibition at the Miami Dolphins (7 p.m. ET, Saturday).

“You just take it one day at a time,” said Abdullah, who is in his first camp with the Raiders after spending seven seasons with the Detroit Lions, Vikings and Carolina Panthers. “That’s what my father has always told me — you can’t live too much in the future, that breeds anxiety. You can’t live too much in the past, that breeds depression. Just staying present. Keeping everything that’s right in front of you, which is what you can control.”

So how many backs might McDaniels keep on that initial 53-man roster?

He’s had as many as five in New England. So if that’s the case, who might be the odd man out among Jacobs, Drake, Bolden, White, Abdullah and Johnson? Cutting Drake would carry an $8 million dead money cap hit.

As Jacobs said, the competition has been “amazing” in camp.

“I mean, it’s fun, man,” said Jacobs, who is playing for a new contract after not having his fifth-year option picked up. McDaniels downplayed theories that Las Vegas was showcasing Jacobs in Canton for a trade.

“I’m a firm believer of having a group of guys that’s ready to compete. I believe that iron sharpens iron, [so] just to be around them guys that’s willing to work every day, that’s good or better in certain areas, and to be able to compete with them, it’s been fun. Being able to come in, and being a vet now, and being with the rookies and being able to pass that knowledge along, that’s what the game is, that’s what the game is all about.”

And as McDaniels said, he really likes this group of backs, and the way it is coached by Kennedy Polamalu.

“I’ve always been a big believer in having as many good backs as you can have on your team because like I’ve said before, they get the ball more than anybody else … other than the quarterback, and usually they’re taking hits and getting contact when they have it,” McDaniels said. “So, there’s a chance for nicks and bumps and bruises and injuries. You just don’t ever want to get caught short in that area.

“I like what they’re doing. They push one another, they help one another, they work really hard together. We’ve got a lot of maturity in that room that continues to try to pull guys along, especially the young guys.”