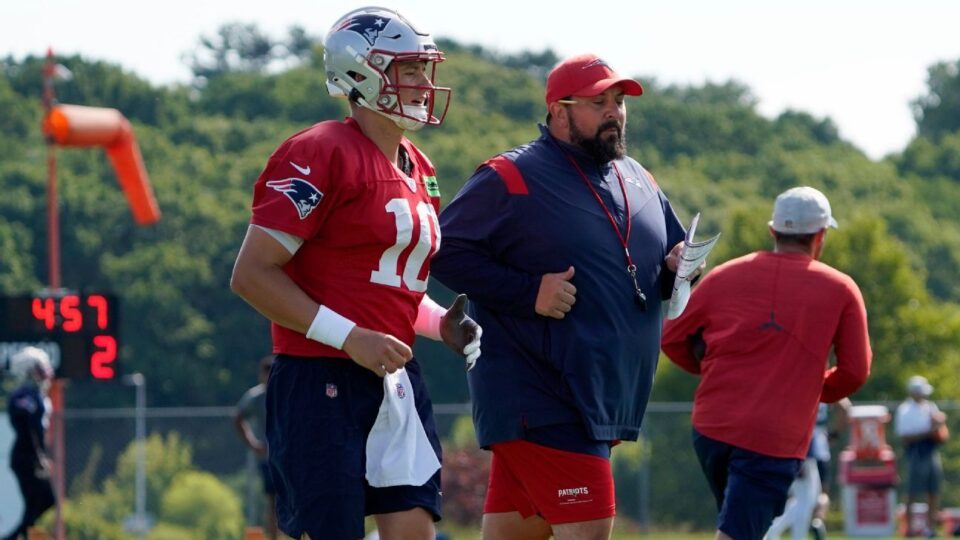 FOXBOROUGH, Mass. — Quick-hit thoughts and notes around the New England Patriots and NFL:

1. Challenging change: One of the reasons Bill Belichick has traditionally promoted from within on his coaching staff is valuing continuity, and players not having to learn a new system with every change.

This promoted healthy player development, and it’s what many assumed (this reporter included) was at the core of Belichick’s decision to turn to Matt Patricia and Joe Judge as leading offensive coaches in 2022. They would step into a familiar culture and attempt to run the same system, with slight modifications.

Pick NFL player props every week. Rack up more wins than Mike for the season and you could win $20K! Make Your Picks

But arguably the biggest surprise since the Patriots reported to training camp July 26 is that the system isn’t as close to the same as many thought. Quarterback Mac Jones and receiver Kendrick Bourne are among those who have referred to the “new offense,” with Jones adding: “I think we’re going to figure it out. That takes time and patience.”

The result has been some shaky practices, one last Monday that led center David Andrews to address the entire unit in an extended on-field chat. The next day after a better practice, veteran quarterback Brian Hoyer said no one wants “to come out here and be embarrassed” before adding: “When you’re doing some new things, there’s going to be some growing pains.”

Witnessing the challenging transition sparked obvious questions: Why tear down an offense that Jones thrived in as a rookie? And what exactly are the changes that players are struggling to adjust to?

The primary motivation for the change, according to those familiar with Belichick’s thinking, was to make it easier on players. The volume of the old system had grown so much over 20-plus years — with Tom Brady a huge part of it, and then specific Cam Newton-based wrinkles in 2020 adding another layer to navigate — so the time seemed right to streamline it and return more to the original roots.

Altering verbiage is arguably the most significant part of that change. Many things no longer carry the same meaning, so offensive players are learning a new language and the rules/responsibilities that come along with it.

As for the players’ on-field struggles, the line hasn’t always opened holes in the running game (zone runs have been a notable problem) or protected Jones, who said: “It’s just getting the communication down. It’s different than what we’ve done in the past.”

Jones, who acknowledged there are things he can do better to help the transition, expressed confidence that the Patriots will find the answers. And Hoyer said “there’s [still] elements of what we’ve always done here.”

“It’s a time when you’re figuring out what works, what doesn’t, and trying to grow through that process,” Hoyer said.

Mike Clay assesses the value Mac Jones could bring to a team in a two-quarterback league.

2. Mac’s locker: For the first time in three seasons, reporters had access to the Patriots’ locker room following a game. One thing that stood out — Jones now has Brady’s old locker.

3. Zappe’s TD throw: Rookie quarterback Bailey Zappe (19-of-32 for 205 yards, 1 TD, 1 INT) earned the respect of teammates and coaches for his play in the second half of the preseason opener, specifically on his touchdown pass to receiver Lil’Jordan Humprhey. The Giants were dialing up all-out pressure calls — a relatively uncommon thing to do in a preseason game — and Zappe beat the blitz on the TD despite having not practiced for it. “I thought he was calm all night,” Belichick said.

Bowen’s 18 favorite draft targets
• Clay: 192 players who should be drafted
•

4. Recycled asset: The top of the Patriots’ 2019 draft looks like it will be a wipeout (second-round pick Joejuan Williams struggled Thursday night and is a long shot to stick), but linebacker Mack Wilson might soften the blow. The speedy Wilson, who was acquired from the Browns in a trade for 2019 third-round pick Chase Winovich, was all over the field in the preseason opener (5 tackles, 1 QB hit). Wilson’s off-field approach mirrors the way he plays. “Do not get complacent,” he said.

5. What’s in a name: Patriots first-round pick Cole Strange‘s first name is Devin, but he’s always been referred to as Cole, which is his middle name. The Tennessee native had never been to New England before the Patriots drafted him and said he’s enjoyed settling in, even if most of his time has been dedicated to football. Asked how he’s grown as a player since training camp started, he said: “I guess in every way possible.”

6. Cajuste’s camp: Belichick has noted in the past how quality offensive tackle depth is critical, and 2019 third-round pick Yodny Cajuste (West Virginia) is making a charge to bolster the team in that area. He has played in just seven NFL games but bumped up to the first unit at one point last week. “This is the best camp he’s had,” Belichick said. “He’s been very competitive.”

7. Uche’s reading list: Third-year linebacker Josh Uche is attacking more than his playbook in hopes of reaching the potential that resulted in the Patriots selecting him in the 2020 second round. He’s also reading “The Alchemist” by Paulo Coelho. “It’s a philosophy book; there are different quotes throughout the book that I can kind of apply to my life. It gives you a new perspective,” he said. Uche’s speed and pass rush were among the defensive highlights in the preseason opener.

8. Jones eyes LBs: Rookie cornerback Jack Jones, the fourth-round pick from Arizona State, on why he wants to add weight to his 5-foot-11, 175-pound frame: “There are grown men running around the field.” Jones hasn’t yet pushed for a starting role, with Jalen Mills, Jonathan Jones, Terrance Mitchell and Malcolm Butler playing ahead of him. But he’s been around the football a lot, as evidenced by his pass breakup in the preseason opener.

9. Stueber’s status: Belichick hinted that he’s not expecting rookie offensive tackle Andrew Stueber to return to the field any time soon when he said the team cleared up its PUP/NFI lists last week as a sign of the Patriots’ overall health. I’m told Stueber, who remains on the non-football injury list, suffered an undisclosed injury while training after the draft which could delay his return to the field until next season.

10. Did you know? Running back James White, who announced his retirement Thursday, is second in Patriots history for catches by a running back (381). Only Kevin Faulk (431) has more.