Patrick Mahomes apologizes to fantasy football managers ahead of time 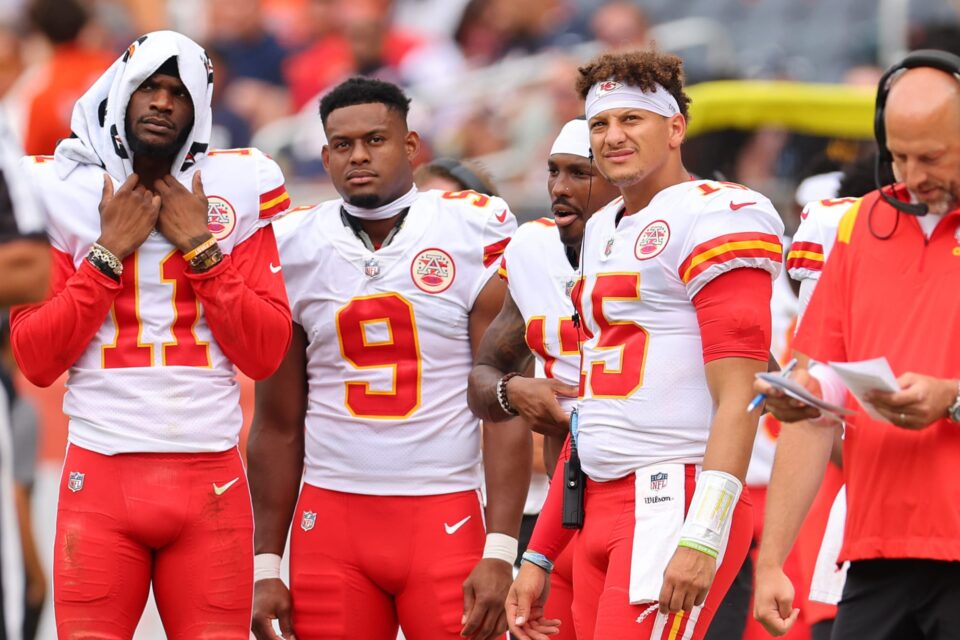 Patrick Mahomes is going ahead and getting ahead of fantasy football managers complaining about the Chiefs offense in the 2022 season.

There are concerns about the Kansas City Chiefs offense for the 2022 season after Tyreek Hill’s departure via trade this offseason. None of those worries, of course, are about Patrick Mahomes or Travis Kelce.

Instead, it largely comes down to the receiving corps. General manager Brett Veach made moves to address the hole left by the Hill trade by signing both JuJu Smith-Schuster and Marquez Valdes-Scantling in free agency in addition to using a Day 2 draft pick on Skyy Moore. And let’s not forget about Mecole Hardman either. But how the hierarchy will look among the pass-catchers has been a topic of discussion, especially among fantasy football managers.

Well, Mahomes is here to already start apologizing for what’s about to happen with that. To paraphrase, good luck guessing who pops off for the Chiefs week to week.

Chiefs QB Patrick Mahomes sends out an apology in advance to Fantasy Football folks. He says “it will be a different guy every week” at the WR position having a big game.

Translation: It’s a WR by committee in KC.

With a group that has never played with Mahomes or in the Andy Reid/Eric Bieniemy offense, it makes sense that the wide receiver room is largely going to be one where the team rides the hot hand.

For fantasy football managers, that’s obviously horrendous news for the people hoping that Smith-Schuster is going to be a target hog or that Moore will be a star right away as a rookie. But for the Kansas City offense on the field, that’s the right approach.

More importantly for both avenues, Kelce is still the focal point of the Chiefs offense. He’s going to be the No. 1 target and is going to put up big numbers, even if the defense is able to pay attention to him a bit more.

Outside of that, though, the offense should remain potent with their “receiver by committee” approach, but good luck to fantasy managers trying to profit off of that — because luck is probably exactly what you’ll need to hit the jackpot in a given week by picking the right receiver.