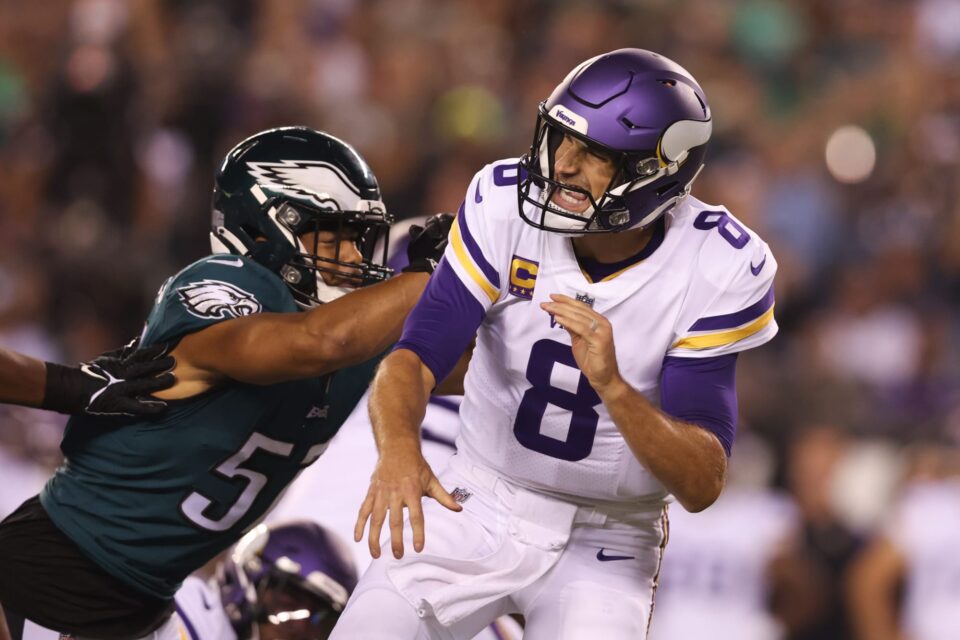 Vikings QB Kirk Cousins’ performance on Monday Night Football against the Eagles brought out all the trolling memes from NFL Twitter.

One quarterback came into Monday Night Football between the Vikings and Eagles as one of the most well-paid quarterbacks in the NFL. The other came in with questions about his legitimacy as an NFL starter still swirling.

By the end of the night, Jalen Hurts looked like he should be the one getting paid while Kirk Cousins looked like the quarterback who should be on a short leash.

While Hurts had NFL Twitter raving, Cousins had social media howling with laughter thanks to all the memes slamming his performance.

What a stat on the ESPN broadcast: On pass attempts longer than 10 yards, Kirk Cousins is 0-for-4 with two interceptions. #Eagles feasting

Kirk Cousins: Most overpaid quarterback ever.

If you didn’t watch the game, those tweets were not overstating a thing. Cousins was that bad.

He threw three interceptions and was lucky not to throw even more as Darius Slay Jr. and the Eagles’ defense flummoxed him throughout.

In the second half, a four-series sequence pretty much told the whole story. One nine-play drive ended with an interception. Then the Vikings were given a lifeline when the special teams unit blocked an Eagles field goal attempt. Cousins threw an interception on the ensuing drive.

Then Minnesota’s defense forced a punt. The quarterback fumbled on his next third-and-10 and was lucky one of his offensive linemen recovered.

Again the Vikings’ defense got the ball back for their offense, picking off a tipped screen pass at the Philadelphia nine-yard line. And again Cousins seemed insistent on giving it away. He lobbed a pass up for Justin Jefferson in the endzone and got to let out a sigh of relief when Slay dropped a would-be interception. Then he did it again! The second pass thrown to almost the exact same spot ended up in Slay’s hands and this time he didn’t drop it.

That was Slay’s second interception and Cousins’ third. It was that kind of night.