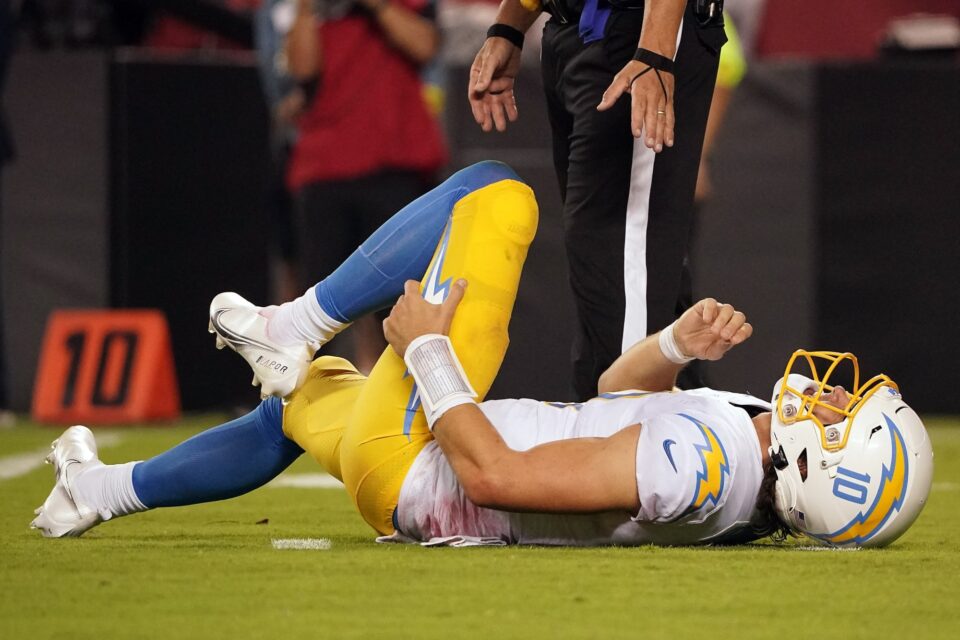 Los Angeles Chargers starting quarterback Justin Herbert was injured late in the team’s Week 2 game against the Kansas City Chiefs, but played through it.

The Los Angeles Chargers were looking to get off to a 2-0 start with a win over the rival Kansas City Chiefs on Thursday Night Football. They did hold a 17-7 lead in the third quarter, but watched as it turned into a 24-17 deficit.

But late in the fourth quarter, Herbert was tackled by Chiefs defensive lineman Mike Danna as he left off a pass. Herbert was hurting badly, and he laid on the turf for quite some time getting checked out by members of the training staff.

Herbert was able to walk off the field under his own power, but was clearly in pain. Twitter users were hoping that he was not dealing with a serious injury.

I love watching Herbert play, I hope that’s not nearly as bad as it looked

Twitter admires Justin Herbert’s toughness as he plays through injury

Herbert’s exit from the game was not very long, as he was spotted wearing his helmet on the sideline. Backup Chase Daniel entered for just one play before Herbert re-entered. Clearly banged up and holding his ribs, he showed off tremendous grit and still managed to have some incredible passes.

Perhaps the most impressive was a 35-yard pass to wide receiver DeAndre Carter.

Three plays later, Herbert completed a seven-yard touchdown pass to Josh Palmer to cut Los Angeles’ deficit to 27-24. That would be the final score of the game.

Twitter users went through all of the emotions. From criticizing the Chargers for keeping Herbert in what was essentially a lost game, to being left in awe over the incredible throws he was able to make even though he was still hurting.

Justin Herbert is unreal man. That was one of the craziest sequences I’ve ever seen. Toughness embodied.

I never want to hear Justin Herbert slander EVER AGAIN

Herbert’s a beast. So much respect for this dude. What sort of pain is he enduring right now ? Throws a DART.

After the game, Charissa Thompson revealed during the postgame show that Herbert was receiving x-rays.

Everyone will be wondering just how severe of an injury Herbert is dealing with. But Herbert showed tremendous guts and toughness to battle through the injury and attempt to help the Chargers come back in the game.