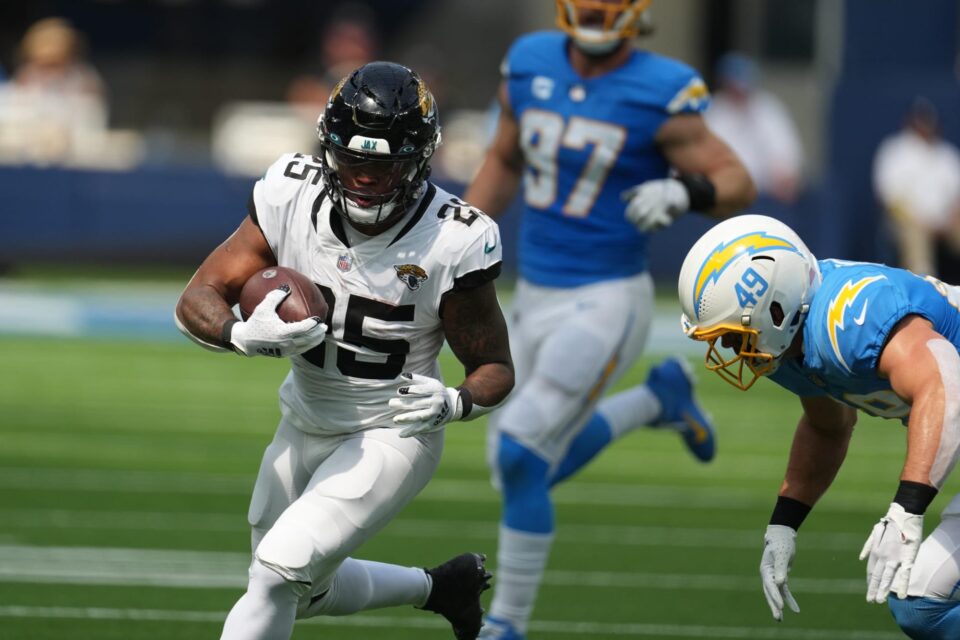 In the Week 4 edition of our NFL power rankings, the Jacksonville Jaguars are making their move while the Los Angeles Chargers have real problems.

The Texans remain winless, and it could stay that way for awhile.

Seattle had a magical night in Week 1, but it seems its magic has run out.

Barring a miracle in Week 2, the Jets would be 0-3 and we’d be talking about how long Robert Sales has left in New York.

The Falcons aren’t blessed with an abundance of talent, but Arthur Smith has them playing hard.

The Bears are 2-1, despite Justin Fields throwing a total of about four passes this season.

When the quarterback gets sacked nine times — because of his play or the offensive line — it’s going to be a long day.

Baker Mayfield continues to struggle badly, but the Panthers saved their season by beating the Saints.

Remember when the Raiders were supposed to be a contender? Pepperidge Farm remembers.

How the Colts beat the Chiefs is nothing short of miraculous, but Indy will take it.

Jacoby Brissett is doing enough to keep the Browns afloat.

The Lions had every opportunity to beat the Vikings, but couldn’t get it done.

Somehow, the Titans can be 2-2 if they handle the Colts on the road this week.

Outside of about 15 minutes in Las Vegas, the Cardinals look awful.

The Saints might need to change offensively. It’s not working.

Tough loss, but understandable. Now, a chance to rebound against the Bears.

Everyone thought Dallas was done without Dak Prescott. Suddenly, 2-1.

Biggest jump of the week. Doug Pederson has the Jaguars looking like a playoff team.

Russell Wilson is looking very limited, but the defense is getting the job done.

Joe Burrow and Co. finally got a win. Now they host the unbeaten Dolphins on Thursday night.

The Vikings are uneven, but they’re 2-1 and have talent all over their roster.

The Rams shut down Kyler Murray, getting a much-needed quality defensive performance.

Tom Brady will get it rolling, but the offense is in a nasty funk right now.

The Dolphins have been awesome, so why aren’t they higher? They were almost outgunned by 300 yards on Sunday and the week prior, were being blown out all day before a miracle. Tough to know if they’re for real, or really fortunate.

Hard-fought win in Tampa Bay, and just like that, the Packers look fine.

Brutal loss in Indy. The Chiefs did everything but forfeit. Special teams were horrid all day.

Buffalo dominated all afternoon in Miami, but made mistakes that lose games. The Bills will be fine.

Best team in football through three weeks. The offensive is a machine, and Jalen Hurts is an MVP candidate early on.