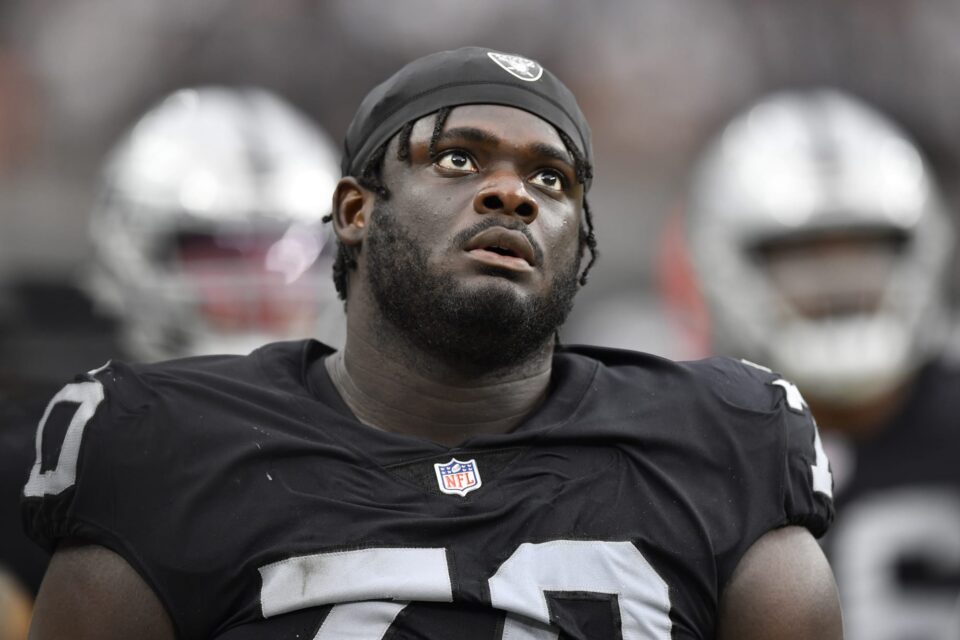 After the Las Vegas Raiders released Alex Leatherwood, NFL Network’s Ian Rapoport dropped the nail in the coffin with a final, hilarious take.

The Las Vegas Raiders released offensive tackle Alex Leatherwood on Tuesday, and Ian Rapoport had a lot to say about it on Wednesday.

Oof, that’s kind of embarrassing for Leatherwood in a way, but it more so falls on the Raiders and their inability to develop Leatherwood. No one would give up a low draft pick to take a flier.

The NFL’s indifference to Leatherwood makes it easy to forget just how good he was coming out of Alabama. His size and physical traits, combined with playing in a strict environment, made Leatherwood a highly-touted prospect. However, questions and skepticism soon emerged despite his selection at 17th overall in the 2021 NFL Draft.

But here’s the real story: Alex Leatherwood is still on an NFL roster. It’s not the Raiders, but the Chicago Bears. Chicago placed a waiver claim on Leatherwood and acquired him on Wednesday. It’s likely for depth purposes and the belief that their coaching staff is good enough to get the best out of him.

The #Bears inherit Alex Leatherwood’s contract, which has 3 years left and $5.9M left that is fully guaranteed, plus they have the right to the fifth-year option. Las Vegas already paid 58.9% of it. https://t.co/CmVMciZwU2

It’s certainly a story of another franchise giving Leatherwood a second chance to resurrect his career while not paying so much money for it. The Bears will likely move Leatherwood to a backup role or even the guard position with Cody Whitehair and Teven Jenkins. Maybe if the Bears move on from Whitehair in the future, Leatherwood slides into that role? Maybe Jenkins? Who knows?

The Bears’ offensive line needed help, and they got it. Meanwhile, the Raiders lost another highly-drafted pick, which adds another stain to former Raiders GM Mike Mayock’s legacy. It didn’t take Ian Rapoport to tell everyone about that, but what’s a good joke if you can’t say it?