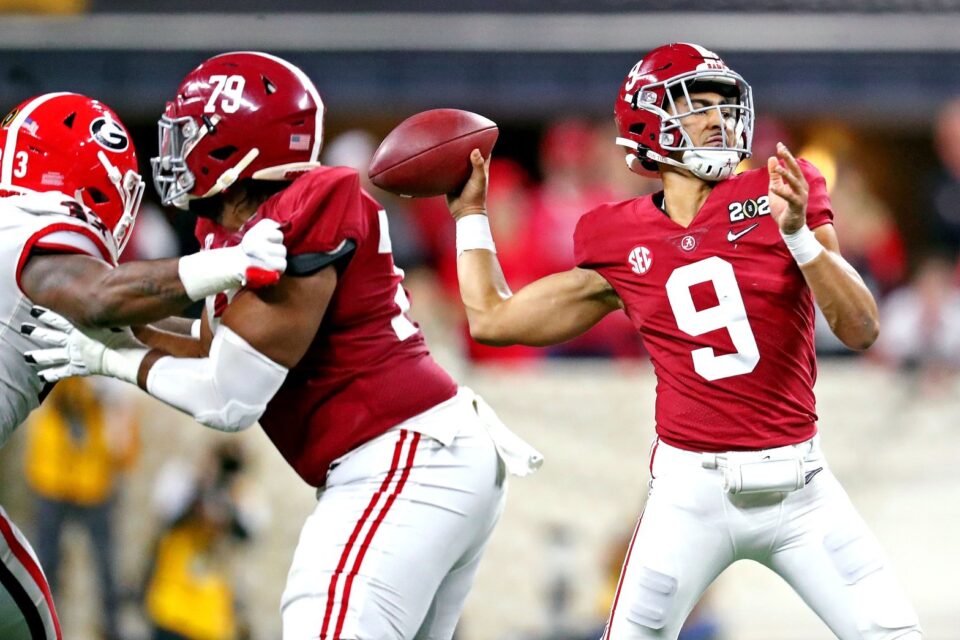 College football is officially back and so are the odds for our Heisman Trophy watch! Each week we’ll be casting an eye over the race for college football’s greatest individual accolade, examining the odds and dissecting the favorites and their candidacy. Weeks of great football stretch out ahead of us, so which Heisman Trophy candidates should you be watching out for in Week 1?

The Ohio State Buckeyes are going to be a must watch this fall, largely in part to the odds-on favorite for the Heisman Trophy, quarterback C.J. Stroud.

In his first year as a starter last fall, Stroud showed incredible development after a difficult start to the season. He recovered to throw for 4,435 yards and 44 touchdowns, emerging as a Heisman Trophy candidate and leading the Buckeyes to a Rose Bowl win over Utah.

With odds of +220 as per DraftKings Sportsbook, Stroud’s a comfortable early favorite to lift the Heisman Trophy.

Stroud can solidify his candidacy by getting off to a hot start in a difficult Week 1 clash against Notre Dame. The third-year QB can’t afford to have a similarly slow start to last season that saw Ohio State make hard work of despatching Minnesota before falling to Oregon. Under a new coach in Marcus Freeman, the Irish will be sure to come out fighting, ensuring a difficult challenge for Stroud and the Buckeyes. Overcome it in style, and the hotly-tipped 2023 NFL Draft QB1 contender might have one foot in New York already.

Yet, Stroud isn’t the only Heisman Trophy contender to watch in this Ohio State and Notre Dame matchup. Buckeyes wide receivers Jaxon Smith-Njigba (+2500) and Marvin Harrison Jr. (+12000) also appear on DraftKings’ early Heisman Trophy odds. Meanwhile, Stroud’s opposite number — Notre Dame quarterback Tyler Buchner — is given odds of +7000 to lift the award in December after beating out Drew Pyne for the starting job.

Another player to watch out for from a Heisman Trophy perspective in this Ohio State vs. Notre Dame matchup is Buckeyes running back TreVeyon Henderson. In his true freshman season, Henderson tallied 1,255 yards at 6.82 yards per carry while finding the end zone 15 times on the ground. Interestingly, Henderson (+2200) has the same odds to become the first RB to win the Heisman Trophy since 2015 as Bijan Robinson, arguably one of the top players in all of college football, regardless of positional bias.

While you’ll need to wait until Saturday evening to catch Stroud, second-favorite Bryce Young, and third-favorite Caleb Williams, there are plenty of early Heisman Trophy candidates to watch when Week 1 gets underway with a packed slate on Thursday evening.

While these players might be extreme long shots, they do currently have Heisman Trophy odds on DraftKings. You never know who might produce a meteoric Joe Burrow or Kenny Pickett-esque rise as another unpredictable CFB season gets underway.

Pickett segues us nicely into one of the premier matchups of Thursday night and the whole of Week 1. “The Backyard Brawl” is one of the most underrated rivalries in all of college football, and there’s multiple twists to this year’s clash between Pittsburgh and West Virginia. Most notably, is a mouthwatering matchup between quarterbacks Kedon Slovis and JT Daniels.

The former USC teammates go into battle looking to revive their faltering college careers and rejuvenate their 2023 NFL Draft stock. Slovis is perhaps the better longshot bet to sneak into Heisman Trophy consideration, despite Pitt losing highly rated offensive coordinator Mark Whipple and star wide receiver Jordan Addison. The Panthers still have a stellar cast on both sides of the ball to support Slovis. DraftKings offers odds of +7000 on the new Pitt QB to lift the Heisman Trophy in December, with Daniels available at +8000.

Thursday night also sees a personal under-the-radar contender to add to the Heisman Trophy watch. Fresno State kicks off a campaign where they could assert themselves as a top Group of Five contender by welcoming Cal Poly to Bulldog Stadium.

While a cupcake game shouldn’t move the needle much, quarterback Jake Haener can pad the box score early and showcase the arm talent that will make him one of the top CFB quarterbacks this fall. The former Washington QB put together 4,096 yards and 33 touchdowns last year.

Ahead of college football Week 1, there are some starting QB jobs still to be won. It feels like there’s been an unusually high number of programs that are undecided on their starter under center at this late stage. Could the Heisman Trophy odds predict who may win the starting job for this Saturday, and if so, who should we be watching out for?

Let’s start at Ole Miss where the Rebels are replacing long-time productive starter Matt Corral. Lane Kiffin snagged USC starter Jaxson Dart from the transfer portal, with the assumption that he’d be the heir apparent. However, Luke Altmyer sits atop a depth chart that features the dreaded “OR” at the QB position. DraftKings has Dart at +7000 to lift the Heisman Trophy, with Altmyer lagging slightly behind at +10000.

LSU head coach Brian Kelly announced that there would be no depth chart announcement from the Tigers ahead of their Week 1 clash with an FSU team that was impressive in Week 0. While presumed that Jayden Daniels will be the QB1 following Myles Brennan’s retirement decision, don’t rule out Garrett Nussmeier from emerging under center on Sunday night. That said, DraftKings currently offers odds of +8000 on Daniels to win the Heisman Trophy with no odds available on the young contender in the LSU QB battle.

Finally, to Clemson, where an unimpressive campaign from DJ Uiagalelei last year has cast doubts on his long-term security as the starter. A preseason Heisman favorite last fall, Uiagalelei struggled to drive the Clemson offense in the same dynamic way we’d seen him do in relief of Trevor Lawrence in 2020. While Uiagalelei remains the frontrunner of the two Clemson QBs for the Heisman Trophy, with odds of +4500 from DraftKings, the fact that freshman Cade Klubnik is available at +6000 is a telling sign.