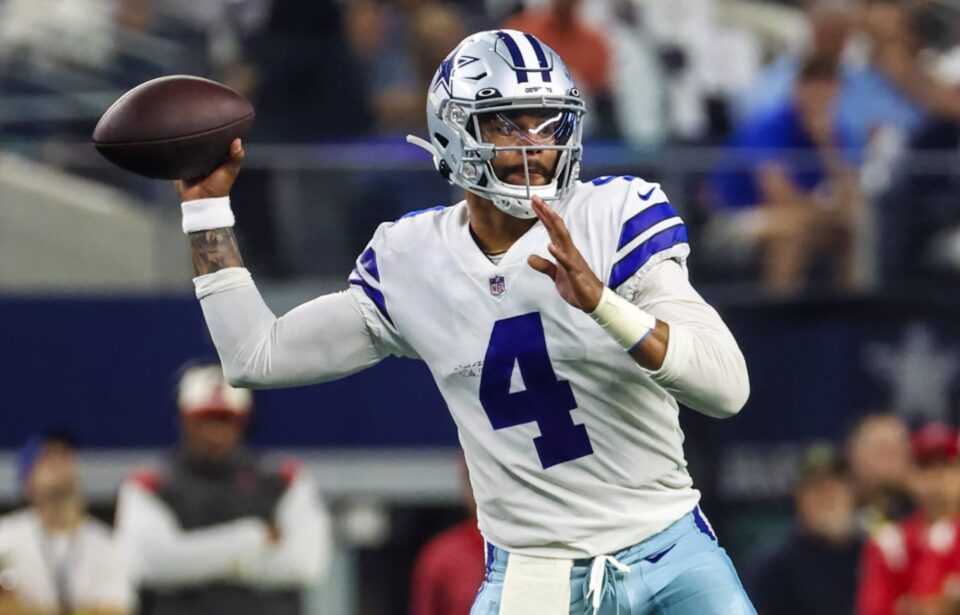 Dak Prescott and the Cowboys’ offense looked terrible in the first half against the Buccaneers and Twitter had plenty to say about it.

Hopefully, fans of high-flying football offenses got their fill early in the first Sunday of NFL action because it was absent in the first half of Sunday Night Football.

The Buccaneers and Cowboys fielded two of the best offenses in the pros last year. You wouldn’t guess it watching the two teams duke it out in a 12-3 first half.

Dallas fans were praying that Dak Prescott would be healthy enough to play in Week 1 but watching him actually play ball was far from a dream come true.

There was no way around it, the performance was bad.

Cowboys: Dak Prescott lit up on Twitter for performance vs. Bucs

It’s time for “Sleep Number” Dak to wake up and snap out of it and start earning the fortune he makes on all his commercials and contract. No, he doesn’t have Brady’s receivers, but most of those years in New England, neither did Brady.

Dak Prescott and CeeDee Lamb, for variety of reasons, been unable to connect tonight. Six targets. One 16-yard catch. Cowboys are in trouble, short term and long term, if they cannot get them going.

Lol There is a reason why @dak got drafted in the 4th….

As much as people wanted to pile on Prescott, there were others who highlighted the disaster that is the Cowboys entire offense at the moment.

Cowboys are so beat up at WR & OLine, can’t even begin to decipher what they actually are. Dak just keeping it close would feel encouraging.

You know you’re in trouble on offense when Dak Prescott is forced to throw passes to undrafted rookie free agents in Week 1.

Would any quarterback success behind center for the Cowboys right now? It’s a real question worth asking, at least based on the performance of the offense as a whole in the first half.

Still, Prescott got the contract he did because he is an exceptional player under pressure. He’s paid to deal with difficulties like this and it didn’t look like he was capable of handling it on Sunday.

It may just be rust considering his rush back from injury. Cowboys fans certainly have to hope that’s the excuse because it’s going to be a long season if the quarterback doesn’t improve considerably.

At least the team still had a chance in Week 1 thanks to Tampa Bay’s less-bad but still sub-par offensive performance. One bad half doesn’t have to turn into two.