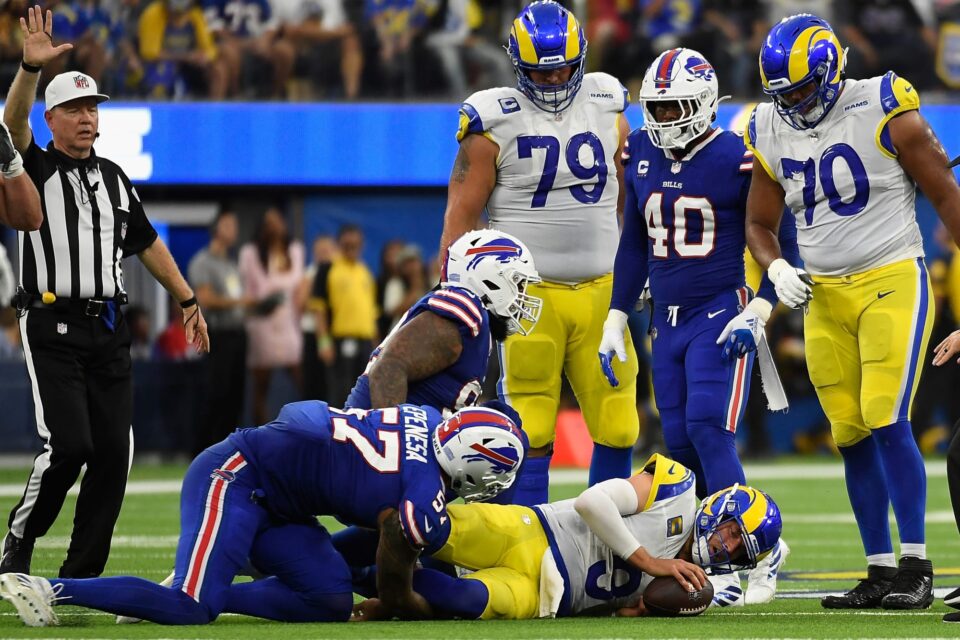 INGLEWOOD, CALIFORNIA – SEPTEMBER 08: Wide receiver Gabe Davis #13 of the Buffalo Bills celebrates with Josh Allen #17 after scoring on a 26-yard touchdown reception against the Los Angeles Rams during the first quarter of the NFL game at SoFi Stadium on September 08, 2022 in Inglewood, California. (Photo by Kevork Djansezian/Getty Images)

The Buffalo Bills handedly defeated the Los Angeles Rams 31-10 in the 2022 season opener. Here are three overreactions from the game.

Football fans have waited for this day — the official start to the 2022 NFL season. The location for the start of this campaign is at the same location as Super Bowl 56, and that is SoFi Stadium. The Los Angeles Rams were looking to carry their momentum from their Lombardi Trophy-winning game last February into the season-opener against the Buffalo Bills.

It was a night to forget for the Rams, as they fell to the Bills 31-10. While the defense held their own against Buffalo, including forcing three turnovers in the first half, they could only hold back Josh Allen back for so long. Meanwhile, Los Angeles’ offense failed to get anything going.

Look, we know it is only one game into the season, but that is not going to stop the overreactions. Here are three things we are overreacting from the Bills-Rams game.

In the offseason, the Bills were viewed as the favorites to win the Super Bowl at the end of this campaign. That is due to the fact that they had an epic game in the AFC Divisional Round against the Kansas City Chiefs, but fell in overtime. Even with the loss, quarterback Josh Allen had a game of legends.

It may not have been the most legendary of performances, but Allen showed why he is the early favorite to win the 2022 NFL MVP award.

Allen started off the game against the Rams as strong as possible, orchestrating an 11-play drive that took five minutes off the clock. The drive ended with Allen connecting on a short pass to wide receiver Gabriel Davis for a 26-yard touchdown.

Throughout the game, Allen showed off his play-making abilities. From stiff-arming defensive back Nick Scott, to diving over linebacker Bobby Wagner on a rushing touchdown, to connecting on a huge touchdown pass to Stefon Diggs.

Overall, Allen completed 26-of-31 pass attempts for 297 yards, three touchdowns, and two interceptions. He also ran for 56 yards and one touchdown on 10 carries.

Putting the two interceptions aside, Allen nearly had the perfect game.