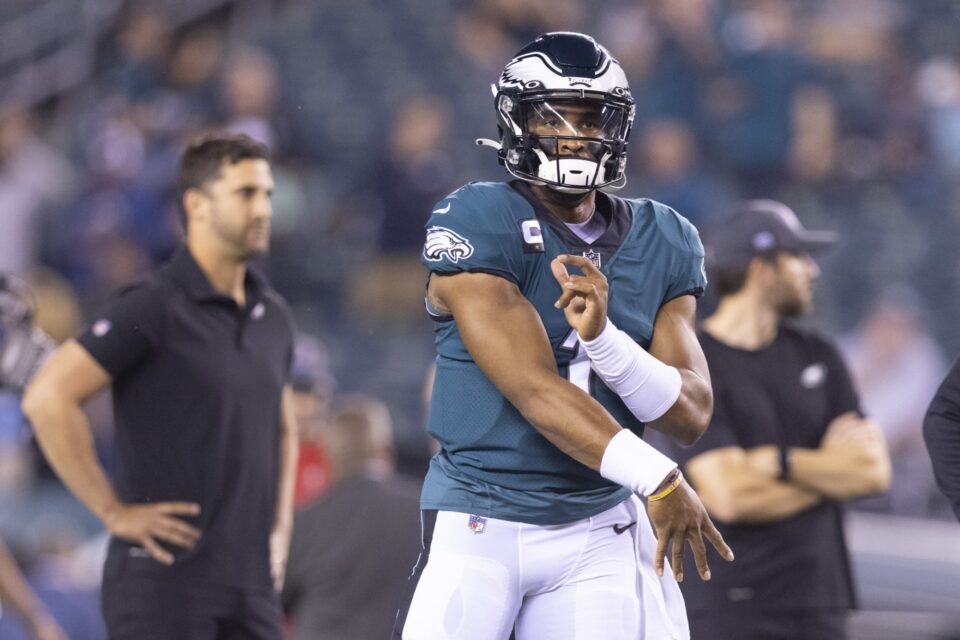 PHILADELPHIA, PA – AUGUST 12: A.J. Brown #11 and Quez Watkins #16 of the Philadelphia Eagles in action against the New York Jets during the preseason game at Lincoln Financial Field on August 12, 2022 in Philadelphia, Pennsylvania. The Jets defeated the Eagles 24-21. (Photo by Mitchell Leff/Getty Images)

The Birds flew under the radar for most of 2021 and then wound up in the playoffs. What will the Philadelphia Eagles do this upcoming season?

It’s an organization and a general manager that perhaps doesn’t get enough credit for keeping this this team in contention. It may not dawn on some people, but the Philadelphia Eagles have reached the playoffs four of the past five seasons dating back to 2017. That was the year Doug Pederson’s club came away with a sensational 41-33 victory over the New England Patriots in Super Bowl LII.

A year ago, new head coach Nick Sirianni and company got off to a rough 2-5 start. But the team settled in and wound up with a 9-8 record, grabbing a Wild Card playoff berth in the process. The Birds were then humbled in Tampa by the then-defending Super Bowl champion Buccaneers. A learning experience indeed. But things are certainly looking up in the City of Brotherly Love.

General manager Howie Roseman made University of Alabama quarterback Jalen Hurts a second-round pick in 2020. He wound up starting four games during his rookie season and got his feet wet.

This past year, he was the club’s starter for 15 games as well as in the playoffs. His passing numbers were somewhat underwhelming, throwing for 3,144 yards and 16 scores with nine interceptions. But he led the club in rushing yards (784) and rushing touchdowns (10).

A year ago, no team in the league ran for more yards per game than the Eagles. Philadelphia also ran for 25 scores, the most in the NFL. Meanwhile, the passing game was ranked 25th in the league, and Hurts and Gardner Minshew combined for 20 TD passes.

The Birds will still run the ball effectively, but look for those aerial yards and visits to the end zone to increase dramatically, thanks in part to additions such as wideouts A.J. Brown and Zach Pascal.