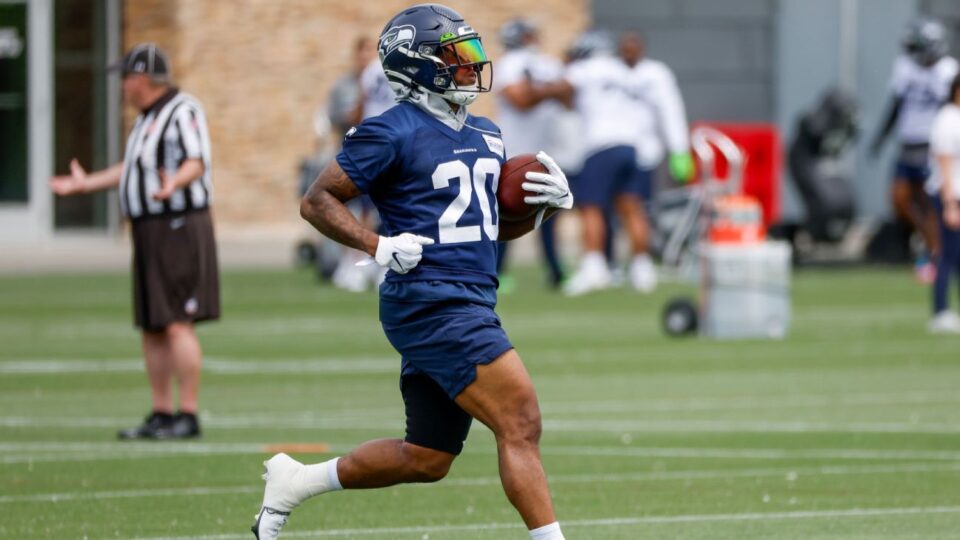 RENTON, Wash. — For the first time in his NFL career, running back Rashaad Penny began training camp as the Seattle Seahawks‘ projected starter.

It didn’t happen as a rookie in 2018, when Chris Carson returned from his broken leg and reclaimed the job, even though the Seahawks had just drafted Penny No. 27 overall. It didn’t happen in any of the next three seasons, as Carson entrenched himself as Seattle’s lead back while Penny was sidelined by one injury after another, including a torn ACL in December 2019 that shelved him for almost all of 2020.

So only now, with Carson out of the picture following plans to retire due to a neck injury, Penny is heading toward the start of the season as the Seahawks’ clear-cut RB1, coming off a torrid five-game stretch at the end of last season in which he led the NFL with 671 rushing yards.

“I don’t think like that,” Penny said when asked about being the clear-cut RB1 last week after the first practice of camp. “I’ve got a lot of stuff to prove to myself. Again, I’ve still got to be healthy … I’ve got a big chip on my shoulder this year, so I really don’t see anything as far as that, but I’m excited about the opportunity and we’ll just see where it goes from here.”

Penny isn’t getting ahead of himself because he knows his spot on the depth chart doesn’t mean much unless he can stay on the field. So far, so good. His only injury hiccup this offseason was a brief absence in the spring to rest what coach Pete Carroll described as a minor hamstring issue. He’s taken part in all five practices of camp and closed out the second one with a long touchdown run in which he sprinted past Seattle’s defense.

“I think this is the best condition that he’s ever been,” Carroll said, “and I know he’s going to be flying.”

Interestingly, Carroll said the same thing last summer after Penny reported to camp on the leaner side of his weight range at 225 pounds. He came back this year at 237, which he’s played at in the past. Penny said some of that weight is muscle he’s added in his lower body but hinted that he wants to drop a few pounds this summer.

“Rashaad is in great shape,” Carroll said. “Two-thirty-seven he weighed. Just cut and sharp and fast and excited because he had such a great offseason. He looked terrific. He couldn’t wait to get out here and just run. He really wanted to show us that he could go, and he looked just like he did when we finished up at the end, so that was really fun to see that.”

That was a reference to Penny’s scorching finish to last season. With Carson on the sideline because of the neck injury — and with some motivation from Adrian Peterson — Penny ran for 208 more yards than the next-best rusher over the final five games. His six rushing touchdowns in that span tied for the league lead and were one more than he totaled to that point in three-plus seasons.

That stretch of brilliance earned Penny something that would have previously been hard to imagine — a second contract with Seattle. He tested free agency before returning on a one-year deal worth $5.75 million, all but $680,000 of which is guaranteed.

The Seahawks had added motivation to bring back Penny with Carson’s football future in doubt. The team released him a day before camp with a failed physical, a procedural move that makes him eligible to earn some of the non-guaranteed money he was set to make in 2022.

Penny, a close friend of Carson’s, called his retirement “heartbreaking.” Carroll did the same.

“I loved him on our team,” Carroll said. “It breaks my heart to not have him again, particularly with how we’re going about it.”

As in, with how much they’ve always liked to run the ball — Seattle has the NFL’s fourth-highest designed rush percentage since 2012 — and with how much of a focus that will be in their post-Russell Wilson offense. What other choice do they have than to lean on their revamped defense and run game and hope Drew Lock and/or Geno Smith can manage their way to victories?

That plan and their doubts about Carson gave the Seahawks more reason to reinforce their backfield by drafting Kenneth Walker III with one their two second-round picks. Walker has flashed his 4.38 speed and much better receiving skills than you might have assumed from a player who caught only 13 passes during his Heisman-finalist 2021 season at Michigan State.

“He’s fast,” Penny said of the 5-foot-9, 211-pound Walker. “This dude, he can play. He kind of reminds me of a smaller Chris. We’ll see when we get pads on … He fears nothing. I like the way he just wants to learn and wants to be great.”

Penny has missed 30 of a possible 69 games (including playoffs) in his career due to injury. Only twice has he carried more than 20 times in a game. So Walker figures to get plenty of work, whether by design or out of necessity. Seattle also has Travis Homer and DeeJay Dallas as change-of-pace options. Their contributions on special teams make them safe bets to make the opening-day roster.

“We’re really fired up about Ken being here too now,” Carroll said. ” … It’s going to be a fantastic opportunity for us to see those guys play. It takes more than one.”

With pads coming on, the second week of camp will offer a look into whether Penny is again running with the same aggressive style that was evident during his closing surge last year.

“I feel like as far as what I did last season, it was kind of no surprise to me because I always knew what I could do,” he said. “I think the hard part was just me getting to play on Sundays … and now that I’m feeling healthy and I’m feeling at my best, I can’t wait to actually take off this year.”