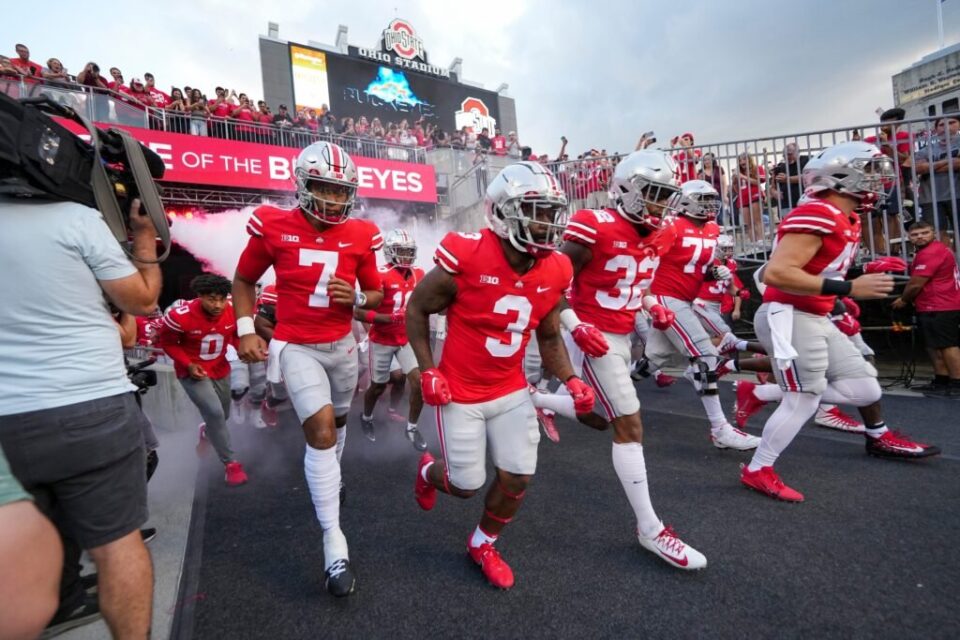 A tale of two very different teams, Wisconsin and Ohio State square off from the Shoe in Columbus in a prime-time Saturday night showdown. The Buckeyes are very clearly the better team this year, and they get it done with an incredibly balanced offense.

The Badgers, a pinnacle of prolonged success over the years are certainly not a bad football team. But they just don’t quite match up to the Buckeyes. But how bad will the beatdown be?

Prediction for Wisconsin vs. Ohio State

Wisconsin has allowed just 24 points through three games this season. That’s encouraging, right? They’ve also scored 118 points on offense. Outscoring your opponents by nearly 100 points is an overwhelming figure. Yet, the Badgers are 2-1 and have looked like an incredibly one-dimensional team.

In the Graham Mertz era at quarterback, the Badgers have hardly been world-beaters through the air. Mertz has six touchdowns and is averaging a career-best early season figure of over 11 yards per attempt. But when he was pressed to make plays happen against Washington State, those plays didn’t come. Expect far more of that against an incredibly talented OSU defense.

As much as we could talk about C.J. Stroud and his ability to find his receivers everywhere on the field, the talk of the town should be how much Wisconsin will actually be able to score. OSU’s defense is solid in spots unusual to the casual OSU fan. Their interior presence on the defensive line is stacked and their off-ball linebackers are among the best in the conference. The biggest mismatch in this outing is Michael Hall Jr. and Tyleik Williams matching up against Tyler Beach and Michael Furtney on the inside.

Both Hall and Williams are incredibly talented true sophomores who are waiting for that marquee game to explode. Hall had his moment against Notre Dame, and Williams will factor into the lineup against Wisconsin as will the other players in the middle — Taron Vincent and Ty Hamilton.

Wisconsin’s offensive line, usually a pinnacle of perfection, has been suspect against talented pass rushers over the past 10 or so games, and Ohio State wins where Wisconsin has been susceptible to losing. That’s a bad match for Mertz who suffers greatly under pressure. OSU kicks off Big Ten play in a big way, both offensively and defensively.

The late-game slate for DFS plays are stacked with talented playmakers. Who can you bank on in the Ohio State vs. Wisconsin game is understood once checking out the player values.

Clearly, Stroud is expected to have a big night. Against this Wisconsin secondary and in the late-game window with a couple of quarterback questions, Stroud is not just the play at QB, but he’s also a factor in your Superflex spot. Plug him in one of those and forget it. Find value elsewhere to afford Stroud.

TreVeyon Henderson was banged up against Toledo and Miyan Williams, his replacement, would start on every down for about 110 other FBS programs. Williams has great value as does Jaxon Smith-Njigba, last year’s target leader who is returning from injury in a full-time role against Wisconsin.

A less-targeted, high-ceiling player in this matchup is Ohio State TE Cade Stover. He’s been reliable for Stroud over the middle of the field, and the Badgers’ defense lost a few 1-on-1s to a less athletic set of pass catchers on Washington State over the middle. Stover is a touchdown-dependent play but great value.