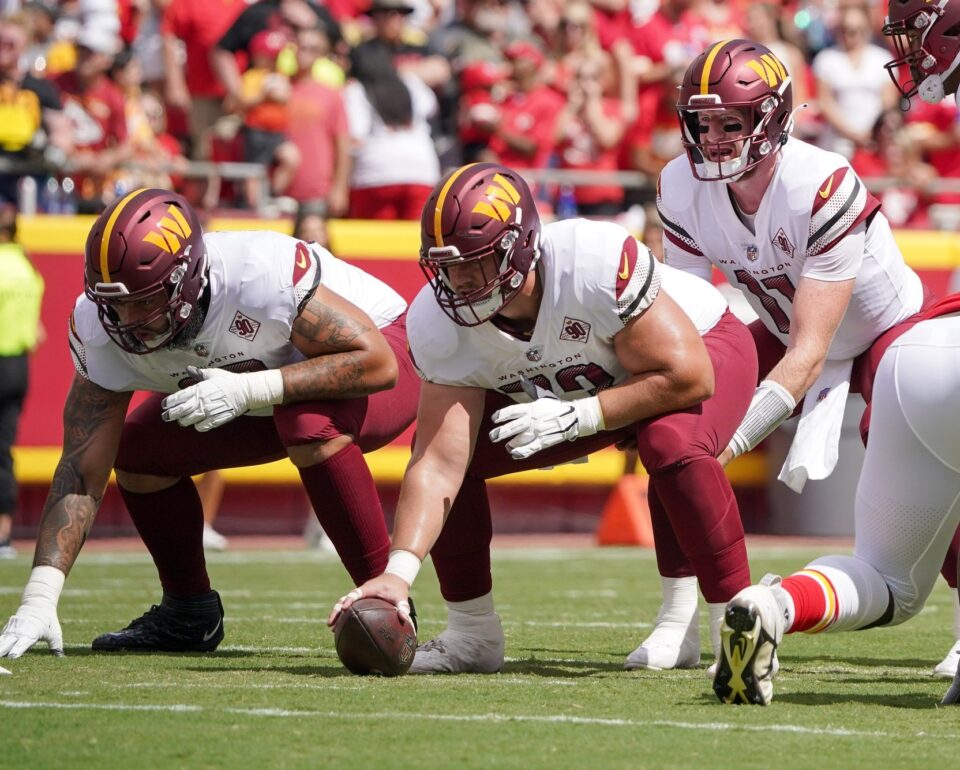 The Washington Commanders boldly traded for Carson Wentz this offseason. Will Wentz be the missing piece for their playoff run? Let’s examine the 2022 Commanders’ current record prediction, projected win totals, any intriguing prop bets involving the franchise, and their odds to win the NFC East, NFC, and Super Bowl in 2023.

All odds are from Caesars Sportsbook unless otherwise stated and are correct as of Aug. 28 at 2:15 p.m. ET.

Following the release of the NFL schedule, Caesars has provided odds and spreads for 14 of the Commanders’ 2022 regular-season matchups. Based on those numbers, Washington is projected as the favorite in six games, underdogs in five, and a push in three. If their season matches those predictions, the Commanders will have a 6-5-3 record following Week 15 of the 2022 campaign.

The NFC East figures to be a competitive division with the Dallas Cowboys favored, Philadelphia Eagles lurking, and Commanders making a push. Adding Wentz to an offense that ranked 23rd in 2021 with a backup quarterback should lead to a considerable improvement. Wentz has his own myriad of issues with consistency and reliability but was efficient in a reduced, run-first offense in Indianapolis last year. Look for Washington to repeat that formula as they flesh out their battle at running back.

The Commanders must also see a large improvement from a defense that finished 25th in scoring last year. Star pass rusher Chase Young is starting the season on the PUP list, meaning it’ll be tougher for the unit to be as effective as they could be with him. Nevertheless, the Commanders are running out of excuses in Ron Rivera’s third season.

This franchise hasn’t produced a winning season since 2016, even though they won the division in 2020.

Now we know the sportsbooks’ predictions for the Commanders on a week-by-week basis. Let’s look at their season-long odds for win totals, the division, conference, and the Super Bowl.

After winning only seven games in each of the last two seasons, it’s understandable why oddsmakers put the Commanders’ season win line at eight. They have the fourth-easiest schedule in the NFL to assist their efforts in reaching the playoffs again. But also clearly a roster lacking the same depth and talent as their peers.

The offense will look quite different compared to last year. Wentz is a mediocre starter who is still an upgrade over Taylor Heinicke. Washington also added rookies Jahan Dotson and Brian Robinson, who at the very least will compete to play in a rotation from the start of the season.

Robinson was pushing Antonio Gibson’s role as the starting back was the shocker of the preseason. The third-round rookie was nothing special in college, and yet, he had clearly jumped into the mix to get a decent workload. Unfortunately, Robinson’s status for the immediate future is in question since he was shot twice in the lower body in late August.

Otherwise, the Commanders are reliant on the defense for a big step forward. They shockingly dropped from fourth in points and second in yards from 2020 to 2021. Washington didn’t add anyone of note to the defense, so the staff will need to bring this group together to rekindle the magic they had in 2020.

The Commanders may have added a few playmakers who will help this season, but no one was in the tier of a surefire star. Wentz doesn’t have the reputation to win MVP, and Young’s odds of Defensive Player of the Year dissipate with every game missed.

This team’s best chance for an award winner is from their rookie class. Dotson and Robinson are in line for big roles, and that volume matters in races.

Oddsmakers have given us quite the variety of prop plays to work with. Wentz-related props will always be intriguing because his play has swung considerably throughout his career. He’s also missed 13 games over the last five seasons, so injuries are a factor.

Unfortunately, we don’t have the chance to play rushing totals with Gibson and Robinson. To make up for it, we’ve been given favorable lines on Terry McLaurin and Dotson. This offense ranked 21st in passing attempts and 10th in rushing attempts last year, so there’s some room for receivers to get more targets.

Young’s absence puts more pressure on Jonathan Allen, Daron Payne, and Montez Sweat to produce effectively. To put it bluntly, they need to be fine without Young, considering the assets the team has invested into the unit. Allen starred with nine sacks last year, and Payne is another stud. Sweat must step up after he missed seven games in 2021.

Having a full eight as the win total is a turnoff for me to bet on this Washington team. Their schedule isn’t nearly as easy when you go week by week compared to what their overall strength of schedule would imply. Starting out against Jacksonville and Detroit will swing their outcome considerably since both are coinflip games that could go either way.

Trusting Wentz is always difficult because of his injury history and streakiness. Even as one of his sharpest critics since he was a prospect, he was a fine starter until he imploded in the last month of the 2021 season. Heinicke was quite bad, so even that jump will be noticeable.

But the defense is the bigger question mark. Sure, they shut down pitiful offenses in Carolina, Seattle, and New York. But can they repeat their post-bye week performances against Las Vegas and Tampa Bay?

It’s hard to know because the same defense hemorrhaged yards against Dallas and Philadelphia just weeks later. Because of that uncertainty, I’m avoiding the team win totals and just going to take the slam dunk, which is this team finishing in third place.

Washington has the strangest player props I’ve taken throughout all of our team betting profiles. It’s fitting because there are several unknown, unique pieces in the equation.

I don’t trust Wentz enough to believe he’ll stay healthy to clear his modest but realistic passing total. He barely threw for over 3,500 yards last year, and Heinicke just outpaced him per game. Wentz might go under if he misses even one game as Washington focuses on their ground attack.

This transcends to Dotson as well. Dotson should easily clear 611.5 receiving yards, but Washington runs an offense that caters to McLaurin and their backs. Would it really be surprising if Dotson gets 585 yards and seven touchdowns? I don’t think so.

I liked Robinson as my long shot to win Offensive Rookie of the Year until he was injured during an attempted robbery. This coaching staff has made it a point to say they don’t like Gibson’s fumbling issues and have gotten Robinson involved with the starters since Day 1. In a weak crop of rookie offensive playmakers, Robinson might have had a good shot at winning the award if he grabbed the job early in the season. Instead, we’ll avoid that pick since we don’t know when he’ll play.

The two best props are Wentz under on interceptions and McLaurin over his 1,000.5 yards. Wentz has controlled his interceptions for most of his career, with an impressive INT rate of 1.7% or lower in four of his last five seasons. It’s far more likely he’ll throw seven than double digits.

McLaurin is also a near lock to get over 1,000 yards. He did so with Heinicke, and Wentz will trust him to produce even more. Even rookie Sam Howell, if he has to play, is a big-play hunter who can thrive with F1.