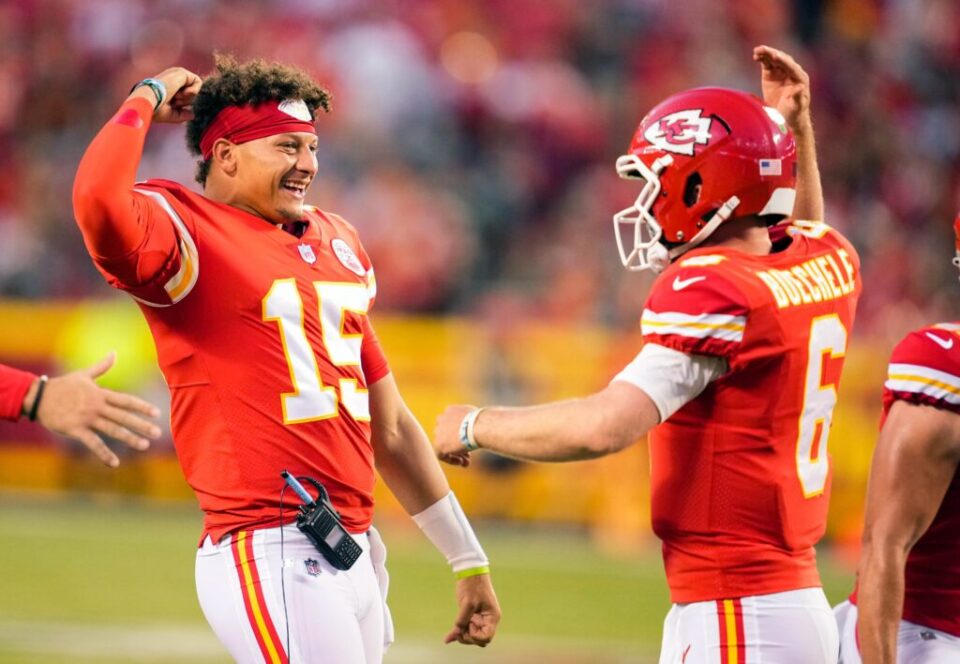 The 2022 NFL regular season has arrived. We’ll be updating you weekly on the best NFL MVP betting odds after the week’s slate of games wraps up. Each week we’ll highlight the best winners and losers for you to consider betting on.

Entering Week 1, I have five MVP candidates that are better bets than the rest of the field. They each have the right blend of narrative for the public to embrace their MVP campaign, the statistical achievements needed to win, and team success. It’s critical for any serious candidate to have all three criteria met.

Most of the chatter surrounding Lamar Jackson this summer has been about his unresolved contract situation heading into the final year of his rookie deal. The two sides are reportedly not close to an agreement on a contract extension, and believe it or not, this actually bodes well for Jackson’s ability to add another trophy to his MVP cabinet.

When examining how quarterbacks have performed over the years when looking for a second contract, a trend quickly becomes obvious — they tend to play much better when there’s a big payday on the line.

As the youngest player ever to be named MVP, we already know that Jackson has what it takes to win the award. The Baltimore Ravens were perhaps the most injury-ravaged team in the league last season, losing multiple key starters for the year, including Jackson for a five-game stretch. Now that he’s fully healthy and with generational wealth on the line with his next contract, it’s a safe bet that Jackson will be spending plenty of extra time in the film room this season to help him wreak havoc on the league as he did back in 2019.

The biggest issue Jackson will face is a lack of clear star power at wide receiver. Is Rashod Bateman and a handful of young, unproven receivers enough for Jackson to produce at a high level with?

I have high expectations for the Philadelphia Eagles in 2022. For them to reach their peak, Jalen Hurts will need to be a star. This is a roster worthy of a Super Bowl appearance, especially considering the NFC is in a down year.

Hurts has to produce like Jackson did in his 2019 MVP season since he’s not a traditional pocket passer. Hurts lacks the accuracy and prowess in the pocket to compare to others. But he’s a great dual-threat who can make up for some of his lacking passing stats with his legs.

If Hurts can get to 30 passing scores and repeat his 784 yards and 10 touchdowns on the ground, he’ll be a serious contender for MVP. That’s a sizeable passing leap, but the Eagles upgraded their WR room to help Hurts increase his efficiency and big-play output.

Consider sprinkling a partial unit on a Hurts’ breakout.

Now a full season removed from the ACL injury that ended his rookie season, Joe Burrow is a young, ascending star in the NFL, and the same can be said for his two favorite targets — Ja’Marr Chase and Tee Higgins. The Cincinnati Bengals’ offense, which already features arguably the best wide receiver trio in football along with a playmaking running back in Joe Mixon, has vastly improved its offensive line since last season.

It feels odd saying a team that reached the Super Bowl in 2021 had a fatal flaw, but that’s how it seemed at times watching Cincinnati’s offensive line that graded in the bottom half of the league last year, coming in at 20th overall. Luckily for Burrow, the Bengals’ front office addressed the weak links in protection up front during free agency.

On the interior, center Trey Hopkins and guard Hakeem Adeniji, who graded out at a lowly 51.4 and 48.4, respectively, are gone. Replacing them are center Ted Karras and guard Alex Cappa, who had grades of 73.0 and 74.2, respectively, last season. Rookie Cordell Volson has also won the left guard job. Riley Reiff (67.3 grade in 2021) has been replaced by La’el Collins (84.0 grade in 2021) at right tackle.

Burrow passed for 34 touchdowns and over 4,600 yards in 2021 coming off ACL surgery behind a below-average offensive line. After the offseason upgrades in blocking, the sky is the limit for Joe Burrow and the Bengals offense in 2022.

Simply put, Josh Allen is a unicorn, and at this point, it’s only a matter of time before he wins his first MVP. Yes, it’s a chalky bet taking the odds-on favorite, but even at +650, betting Allen in this spot is a value.

The Buffalo Bills are the clear-cut favorite to win the Super Bowl in 2022, and Allen is by far the biggest reason why. He’s eclipsed 4,400 passing yards in each of his last two seasons and passed for at least 36 touchdowns in both. Oh, and he’s run for 10 more touchdowns than Jackson has since they came into the league in 2018, racking up 31 TDs on the ground over a four-year span.

The key for Allen is increasing his efficiency after a down regular season. He completed almost 6% fewer of his passes despite his average yards per attempt dropping by 1.1 yards. Those numbers must more closely resemble his 2020 campaign.

With Allen’s dual-threat ability and the supporting cast in Buffalo, it’s difficult to find a reason not to like his MVP odds.

While I think the Kansas City Chiefs took a step back overall this offseason, it’s hard to fade Patrick Mahomes. In fact, the Chiefs’ decision to build more of a meritocratic system helps bolster the narrative that Mahomes is doing so much heavy lifting. That narrative is justified, even if Travis Kelce and Andy Reid are massive assets in his success.

The Chiefs will need to win close games throughout the year thanks to a tough AFC West. Mahomes may lead the NFL in all passing stats as he did in 2018, which would set him up nicely for an MVP push. He’ll have to balance carrying the unit and overloading himself and forcing mistakes.

Storylines and narratives often matter when it comes to awards, and even MVP voters are prone to cognitive bias. Mahomes has already proven himself as an all-time talent, but if he can lead the Chiefs past Justin Herbert and the Chargers this year in the AFC West, it’s going to be hard to make a case against giving Mahomes the MVP.