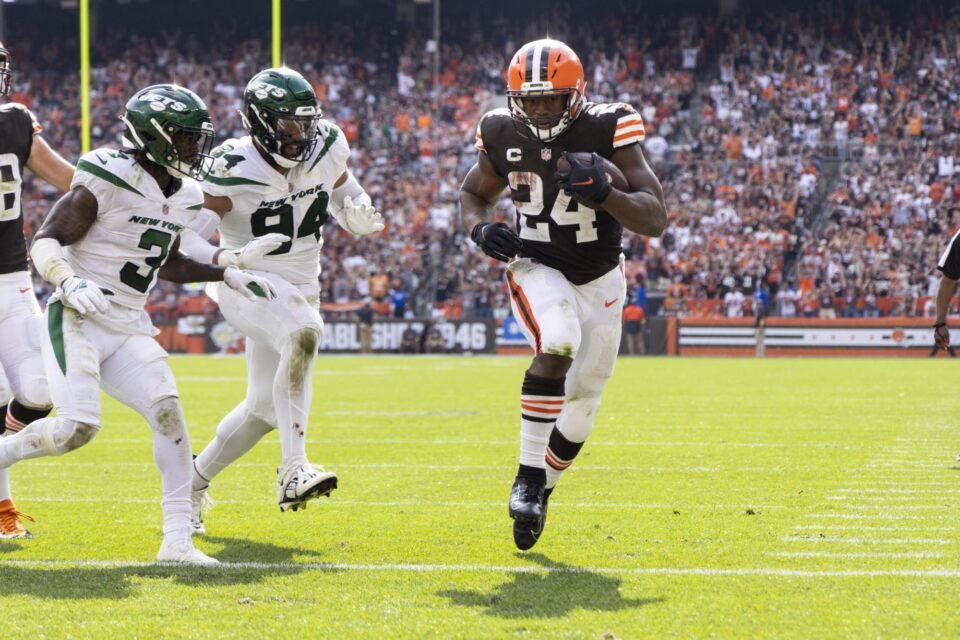 The Cleveland Browns lost in unthinkable fashion to the Jets in Week 2 and it feels like only this team could lead to Nick Chubb feeling bad for scoring.

It was an unmitigated disaster at the end of the fourth quarter for the Cleveland Browns in Week 2 against the New York Jets. The team was given a 99.9% chance of winning after Nick Chubb scored a touchdown with 1:55 remaining in the game to go up 30-17 after a missed extra point. But this is a franchise where history has told us to never rule out the 0.01% chance that something awful is going to happen.

That was indeed the case. The Jets scored in almost 30 seconds, recovered the onside kick, then drove and scored the go-ahead touchdown to take the win.

After the gut-wrenching loss for Cleveland, it was all about playing the blame game. And while there were many players, people and coaches who could be handed some of that, it seemed like Chubb took the brunt of the loss for scoring late when he could’ve fallen down short of the goal line and allowed the Browns to run out the clock.

On Tuesday, Chubb admitted that he made a mistake that cost the Browns the game by scoring on that play and was very clearly upset with himself about it.

Credit to Chubb for being an unquestioned leader and helping to support the weight of a historically bad loss on his massive quads, but it speaks to the immense dysfunction of the Browns organization that he was put in the position where he clearly felt it necessary to A. feel bad about scoring to go up by two scores and B. be the only one being criticized for the loss.

Should Chubb, who has shown terrific game awareness in similar situations previously in his career, fallen down before reaching the end zone? By the book, yes. But after he scored, the Cleveland defense should be getting a lot more flak for allowing Joe freaking Flacco and the Jets to drive down the field and find the end zone twice in under two minutes.

Just when you think the Browns can’t find new ways to make you shake your head, something like this happens.