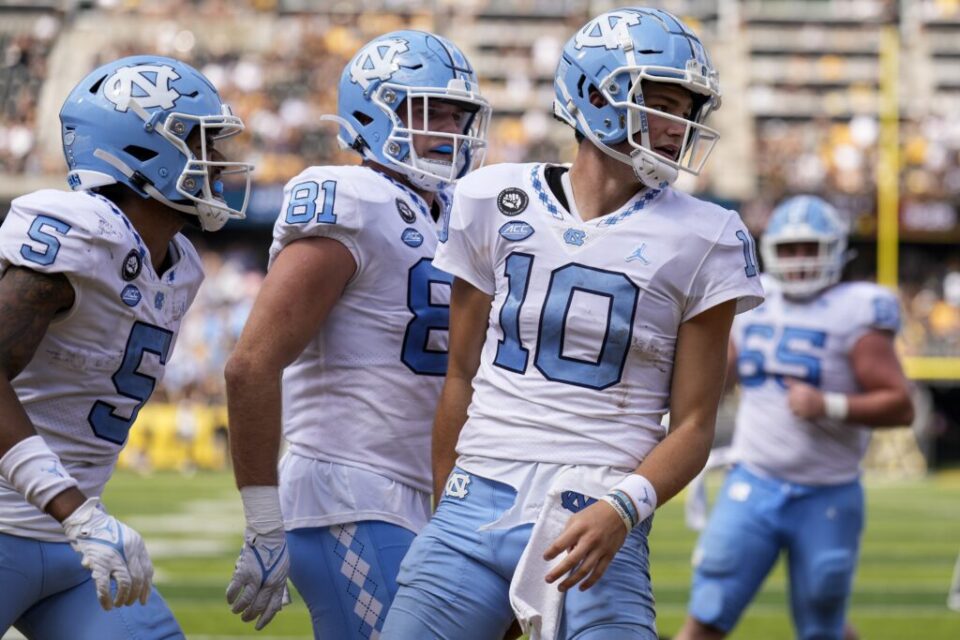 After three straight days of the best sport in the nation, our top 25 college football rankings see some movement, with two days of Week 1 remaining.

Do you hear that? That’s the roars of cheering fans, clashes of helmets, and TV announcers nearly losing their voices over heart-racing plays. College football is back, and it returned with a vengeance.

Week 1 saw some ranked teams sneak passed lesser competition, and others rise like a phoenix out of the ashes into the top 25. Who were the biggest risers and fallers with two days of CFB action remaining?

Alabama faced 2021 Mountain West Conference champion Utah State in Week 1, but looking at the score (55-0), you’d think they played a bottom-ranked FCS team. Bryce Young, Will Anderson Jr., and Co. didn’t just take care of business — they demolished it. Nick Saban’s squad entered the season at No. 1, and they are unlikely to fall any time soon.

The top three teams are a step above the rest of the nation. Sure, Ohio State didn’t shut out Notre Dame, but that was the closest thing to a playoff game in Week 1. C.J. Stroud made some ridiculous throws, with Emeka Egbula and Marvin Harrison Jr. serving as his top two targets due to Jaxon Smith-Njigba leaving early due to a leg injury. Defensively, it may be early, but Jim Knowles seems to have already revamped the unit as he did at Oklahoma State.

Georgia thrashed top-15-ranked Oregon, but the Ducks were overrated (even by me). That’s the only reason the Bulldogs don’t surpass the Buckeyes here. Last week, I said Stetson Bennett isn’t an elite QB. I need to eat some crow. While he may not be a sought-after NFL prospect, he is an elite college QB. Oregon has some serious talent on defense, and Bennett got everything he wanted, completing 25 of 31 passes for 386 yards and two scores.

Even after losing five defenders in the first round of the 2022 NFL Draft and their defensive coordinator Dan Lanning (Oregon’s new head coach), the Bulldogs’ defense picked up where they left off.

Have you seen enough, Jim Harbaugh? After letting Cade McNamara start the season opener against Colorado State, it’s time to hand the reins to the more talented J.J. McCarthy. McNamara completed just 9 of 18 passes for 136 yards and a score. McCarthy came in, connected on all four passes for 30 yards, and rushed three times for 50 yards and a score.

Blake Corum and Donovan Edwards were efficient on the ground for Michigan, but the defense deserves respect after many thought they’d regress without Aidan Hutchinson, David Ojabo, and Daxton Hill. Sure, it was against Colorado State, but if the defensive line (notably Mazi Smith, Eyabi Anoma, and Mike Morris) continues to disrupt, back-to-back playoff appearances shouldn’t be written off.

Despite a lengthy delay, Texas A&M opened their season with a 31-0 victory over Sam Houston State. But the win didn’t come without its lumps. Starting signal-caller Haynes King threw two INTs, and lead rusher Devon Achane averaged just 2.3 yards per carry on 18 attempts. That inefficiency can’t continue if the Aggies want to make a playoff push, but Ainias Smith (6-164-2 receiving line) and the defense put on a show.

North Carolina State eeked out a 21-20 win against East Carolina. A win is a win, but they aren’t created equally. Devin Leary struggled after looking like one of the nation’s best QBs last year. His 6.4 yards per attempt, 52.5% completion percentage, and 1:1 TD-to-INT ratio against a Group of Five defense are concerning. Demie Sumo-Karngbaye was a nice surprise on the ground, and the offensive line returned four of five starters. Nevertheless, the Wolfpack must improve to make a playoff push.

With two teams dropping from ahead of them, Clemson moves up a couple of spots prior to their Week 1 contest against Georgie Tech on Monday. All eyes are on DJ Uiagalelei and the offense after the unit struggled mightily last season. The defense is national championship-caliber, with Myles Murphy, Bryan Bresee, Xavier Thomas, Tyler Davis, Trenton Simpson, and Andrew Mukuba leading the way.

Suffering defeat at the hands of the No. 2 team in the country won’t drop you too far in top 25 rankings, especially when you put up a solid fight. The defense held Ohio State without a 100-yard rusher or receiver and limited Stroud to 6.6 yards per attempt. But the other side of the ball didn’t fare so well.

No rusher had more than 28 yards, Michael Mayer was the only pass catcher with one catch (5-34-0), and Tyler Buchner completed just 10 of 18 passes for 177 yards. It was Buchner’s first start and Notre Dame’s first contest with a new head coach (Marcus Freeman), but they need to get the offense off the ground quickly.

Lincoln Riley, Caleb Williams, Jordan Addison, and the star-studded USC offense got what they wanted against Rice — as they should’ve. But what stood out most from their Week 1 contest was the defense. The Trojans didn’t allow a single point in the second half and generated three pick-sixes and four interceptions on the day.

Even with Lincoln Riley and Caleb Williams now in Southern California, the Sooners put up points in Week 1. Offensive coordinator Jeff Lebby and Dillon Gabriel orchestrated a 45-point scoring day (albeit against UTEP), and RB Eric Gray and WR Marvin Mims flashed their big-play ability. Even Brent Venables’ defense looks improved from last year. Still, with so much offseason change, some kinks need to be ironed out on both sides of the ball.

Blake Shapen led Baylor over Oklahoma State in the Big 12 title match last year, and he has seemingly not missed a step. In a “tune-up” game against Albany, he threw for 214 yards and two TDs on 17 of 20 passing, adding a rushing score for good measure.

Five other rushers got in on the action, cruising passed the pylon six more times. Even Gavin Holmes took a punt 72 yards to the house. It was an all-around beatdown for the Bears, but BYU will give them a real test in Week 2.

“Clayton Tune to Nathaniel Dell” will be a nationally recognized phrase by the time the 2022 season is over. Houston should unseat Cincinnati as the top Group of Five team in the country after the Bearcats lost several integral pieces. Dana Holgorsen led the Cougars to 4-8 and 3-5 campaigns to begin his tenure, but with a high-powered offense, exceeding their 12-2 record in 2021 isn’t out of the question.

Anthony Richardson. There isn’t much else to say. Yea, the defense showed its muscle, but Richardson was the catalyst for Florida‘s victory over top-five-ranked Utah. Physical ability seeps out of him like a sieve as he can take the top off defenses with his arm or dart passed them with his legs. Richardson is a true dual-threat that is only scratching the surface of his abilities.

It wasn’t the prettiest, but Pitt rose victorious in the first Backyard Brawl since 2011. QB Kedon Slovis had his moments, WR Konata Mumpfield proved an excellent transfer portal pickup, and CB M.J. Devonshire is a rising star. But the defense, particularly the front seven, must tighten up after allowing nearly eight yards per carry for 213 total. If they can do that, and Slovis gets the passing game clicking, this may be the lowest the Panthers rank all season.

With Jim Knowles now at Ohio State, Oklahoma State‘s defense was noticeably less effective. The Cowboys hadn’t allowed over 40 points since November 2020, yet they allowed Central Michigan to drop 44 and 546 total yards on them. That won’t fly against stiffer competition, and were it not for Spencer Sanders and an offense that soared to 58 points, Oklahoma State would be further down the top 25.

It was the Braelon Allen show for Wisconsin in Week 1, as the sophomore pummeled Illinois State for 148 yards and two TDs. Graham Mertz even looked like his first-career-start self, nailing 14 of 16 passes for 219 yards and a score. While the victory was expected, an early season shutout is always a good way to boost a defense’s morale.

There is no way around it: Payton Thorne was the thorn on his own side. 233 yards and four touchdowns look good enough on paper. But an interception, 50% completion rate, and numerous ugly misses leave more questions than answers. Jalen Berger (16-120-1) and Jarek Broussard (10-54-0) proved to be a stout duo out of the backfield, and the defense came up with seven sacks and two fumble recoveries. Yet, if Thorne can’t right the ship, Michigan State will sink quicker than many expect.

Anytime your running game can only muster 2.6 yards per carry against a Group of Five opponent, the offensive line is called into question. Still, Will Levis hit 300 yards and three TDs, with Tayvion Robinson (6-136-0) proving to be his top weapon. Kentucky‘s defense held Miami (OH) to 290 total yards and only three third-down conversions on 14 attempts. And Barion Brown came up clutch with a 100-yard kick return touchdown.

It was against Bethune-Cookman, by you can only discount 70 points so much. Tyler Van Dyke completed 13 attempts for 193 yards and two TDs before Miami subbed him out. Additionally, Henry Parrish Jr. (14-108-3) and Thaddius Franklin Jr. (9-78-2) made the most of a commanding push from the offensive line.

The defense even got in on the fun with a pick-six, and James Williams, Caleb Johnson, Akheem Mesidor, Mitchell Agude, and Tyrique Stevenson displayed why they can make a deep run in the ACC.

Well, I declared Utah would finally end the Pac-12’s drought of not having a representative in the CFP. There is still an entire season to go, but after a loss in Week 1, it’s going to be very difficult for the Utes to make my proclamation come true. Tavion Thomas and Brant Kuithe showcased their NFL-level abilities, but Cameron Rising ultimately fell short, throwing a game-sealing interception in the end zone.

Lane Kiffin struggled to get production out of QB Jaxson Dart and the passing game against an underrated Troy defense. The rushing attack had to pick up the slack, and oh, did they. TCU transfer Zach Evans and freshman Quinshon Judkins combined for 217 yards and a score on the ground. However, Ole Miss‘ defense didn’t look overly impressive, and the passing game’s underperformance leaves questions.

USF was no match for Jaren Hall and BYU’s offense, as the Cougars scored on seven of 10 possessions (not counting their one play before halftime). Hall had one of the best throws of the day, but Keanu Hill wasn’t able to haul it in. The ground game also ate its fair share, rumbling for 312 years and three scores on 37 attempts. All-in-all, BYU exhibited a complete team, though matchups against Baylor, Arkansas, Notre Dame, and Oregon cast a dark shadow on their future success.

After back-to-back victories, North Carolina deserves a spot in the top 25. But it’s important to temper the hype, as their first win came against FCS-level Florida A&M, and their second was a 63-61 nail-biter over Group of Five Appalachian State. Regardless, although the defense clearly has its holes, redshirt freshman QB Drake Maye is a star in the making on offense.

Although there was sloppy play from both sides, Oregon State dominated perennial Group of Five standout Boise State. So much so that the Broncos chose to bench longtime starter Hank Bachmeier after two interceptions and a fumble lost. Beavers QB Chance Nolan made some highlight throws downfield, Luke Musgrave showed why he is one of the best TEs in the nation, and CB Rejzohn Wright and the defense proved too much to handle.

Teams on the outside looking in

James Fragoza is a Writer and News Editor at Pro Football Network. You can read his other work here and follow him on Twitter @JamesFragoza.