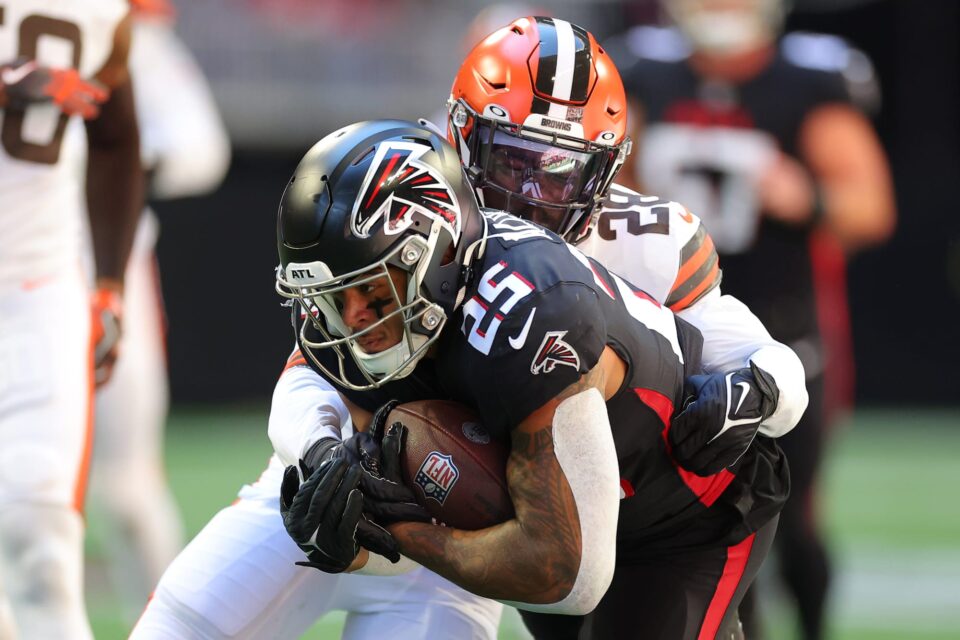 The NFL power rankings for Week 5 are out, and we see a big dip from the Pittsburgh Steelers, while Atlanta Falcons are rising up.

The only winless team in the league. The Texans fight hard, they just don’t have the talent.

Justin Fields appears to be a failed experiment.

The Steelers are 1-3 and their next four games are all against top-end teams. Good luck.

After winning in Week 1, Washington has a case for the worst team in football over the past three weeks.

The Panthers are feverishly trying to figure out if they can get a conditional seventh-round pick for Baker Mayfield and Matt Rhule.

This isn’t your father’s Patriots. Not nearly enough talent to win most games.

The Jets are finding ways to win. It’s not pretty, but they’re 2-2.

Indianapolis is really, really lucky it plays in the AFC South. The Colts would be cooked in any other division.

Defense? Anybody? The offense can score, but so can anybody who plays the Lions.

Seattle is shockingly showing a real offense some weeks. If nothing else, the Seahawks are fun.

How do you lose when the opposing quarterback throws seven completions with an interception?

How do you win when your quarterback throws seven completions with an interception?

The Saints have talent, but they don’t have a quarterback, and might not have a coach.

Finally, a win for the Raiders. Now, they go to Arrowhead on Monday night in another must-win.

Tennessee hasn’t been impressive, but it’s 2-2 and tied atop the AFC South.

How are the Cardinals 2-2? It feels like they should be 1-8. Also, enjoy those extensions for Kyler Murray and Kliff Kingsbury.

The Giants are finally changing their culture under head coach Brian Daboll. The losses might come this year, but this is the start of something good.

The Chargers won, but they did everything possible in the second half to lose.

This isn’t a winning team. The Broncos have issues all over, and now injuries are mounting.

Even though Jacksonville lost, the Jaguars should feel good about their team. Good talent, good coaching.

After losing Dak Prescott, many thought the Cowboys were in for a long season. Instead, they’re 3-1 and in great position.

The Rams better find another weapon, because throwing to Cooper Kupp on every play isn’t ideal.

The Niners have their offensive deficiencies, but this is a contender.

The Ravens have blown two ridiculous leads at home. The defense isn’t good, and the entire team is incredibly dependent on Lamar Jackson.

Huge game this weekend. Beat the Ravens, and after an 0-2 start, the Bengals are in first place of the AFC North.

The Vikings are weird, and they’re far from consistent, and yet they’re 3-1 and tied atop the NFC North.

Tampa Bay got rocked against the Chiefs, but the schedule now gets much easier and the Bucs’ health is getting there.

The big concern right now is about Tua Tagovailoa, and the Dolphins’ decision-making.

Green Bay is winning ugly, but it’s winning. Aaron Rodgers and Co. will figure it out.

The Chiefs showed all they can be on Sunday night. They out-rushed the Buccaneers by a 189-3 margin.

What a gut-check by the Bills, coming back from a 20-3 deficit to beat the Ravens. Buffalo is back on track.

The only undefeated team in the league. Philadelphia looks great.