Jordan Travis Is The MVP Play On Sunday 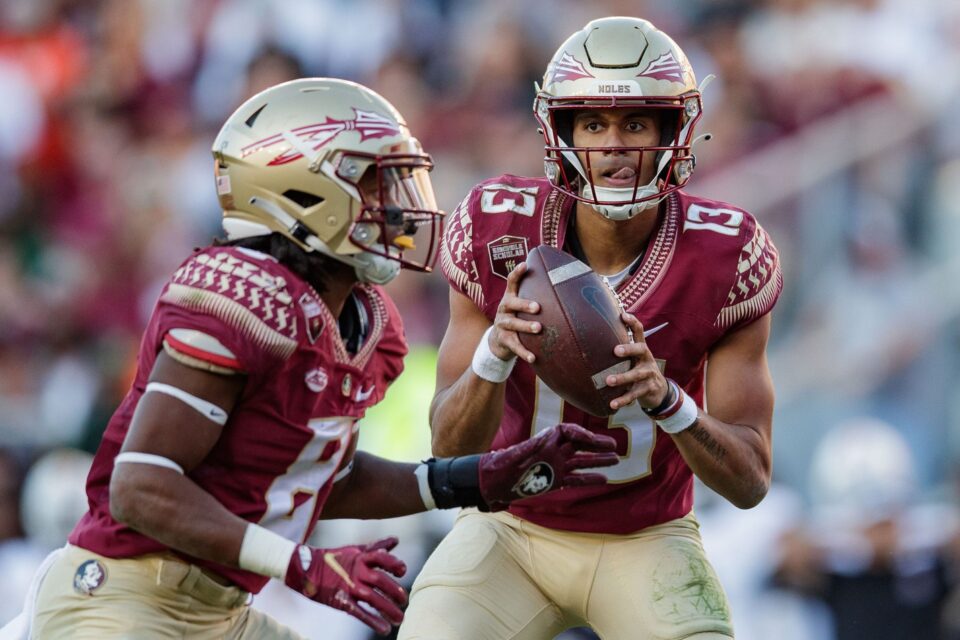 The college football Saturday slate has given way for a marquee matchup between the FSU Seminoles and LSU Tigers on Sunday night. Ahead of this highly-anticipated matchup, here are the Florida State vs. LSU FanDuel DFS picks to make for your Sunday CFB betting lineup.

With just the Seminoles and Tigers in action, your lineups need to be consistent with the best players available and knowledgeable about who and how much each player will play. The format is a bit different due to one game, so we’ll be using FanDuel’s MVP competition, where one player is selected to score 1.5x the points, and the others use the normal scoring methods.

The common pick here may be LSU WR Kayshon Boutte, but as he’s the known commodity, you can bet the FSU secondary is keen on stopping — or at least limiting — him. As such, if FSU has any chance against the Tigers, it’ll be because of Jordan Travis at quarterback.

He’s shown growth over the past four outings, really turning it on down the stretch last season and in the 2022 season opener against Duquesne. Travis’ legs make him a safe play as he’ll surely tote the rock against LSU and in red-zone situations, meaning multiple rushing and passing touchdowns should be expected.

Kayshon Boutte is a must-have on your roster. He’s simply too talented not to pick up here despite his high price. He’ll be owned in the majority, if not all, of DFS plays on Sunday, but for good reason. Don’t worry that FOMO takes over; Boutte is simply electric and should break FSU’s contain at least once in the outing.

The duo of top pass catchers is a bit dangerous, but if Boutte is handled, you better believe Jaray Jenkins will be the second read for LSU QB Jayden Daniels. Jenkins averaged 14.8 yards per catch last season and finished second on the team with six touchdowns. He’s the third-highest-priced skill player, but he is well worth it, considering the other options to reach your budget limit are the FSU running backs that currently reside with a “do not touch” moniker against this LSU defense.

Exploding onto the scene with a dominant performance in Week 0 was Kentron Poitier. He hauled in four receptions for 84 yards against Duquesne, rising to the occasion when other Seminole pass catchers did not. Averaging 21.0 yards per catch is one thing, but doing it with his mix of size (6’3″, 209) and speed is another. Those skills translate well against an LSU defense with more questions than answers on the back end.

As good as this LSU front seven may be, Camren McDonald could be a mismatch over the middle of the field like Poitier is. With attention favoring the massive 6’7″ Johnny Wilson in red-zone situations, Poitier and McDonald are the next best options for Travis and FSU on offense. He had a drop against Duquesne and was kept off the stat sheet, so you better believe he’ll be focused and have a chip on his shoulder against LSU.