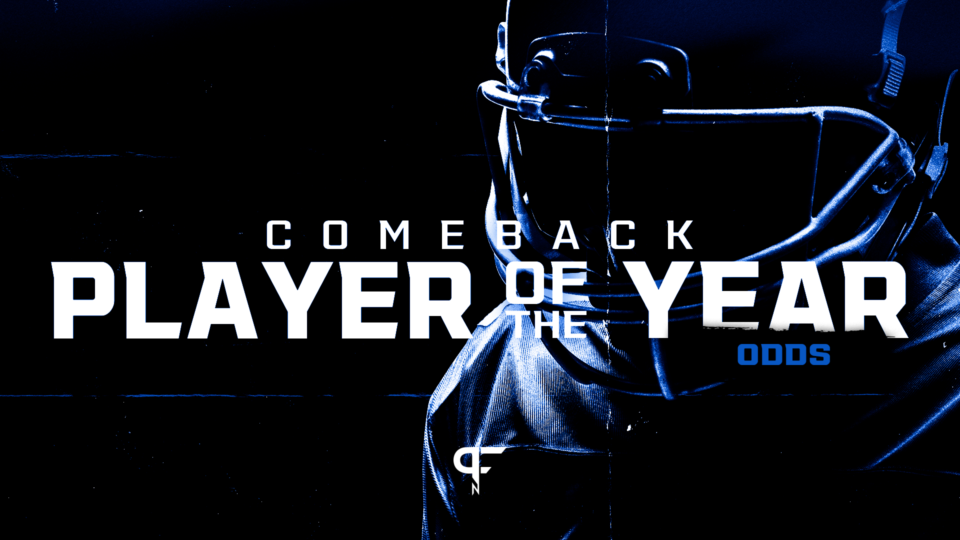 Week 1 has already brought a significant shift to the list of favorites. After watching each game and analyzing how each player performed, I’ve curated my list of best bets moving forward. Let’s jump into three risers worth placing futures action on and three fallers losing ground in the race.

The New Orleans Saints barely survived their Week 1 scare against the lowly Atlanta Falcons, but it was by no fault of Jameis Winston or Michael Thomas. The two leaders in the Comeback Player of the Year Award race are there for a good reason. Winston is the best player being considered at the most important position, and Thomas showed his All-Pro talent with two touchdowns in the game.

We’ll focus on Winston more this week, even though both saw their odds increase. Winston played one of his finest games this past week, proving efficient with 23 completions on 34 attempts, two touchdowns with zero interceptions, and a 7.91-yard per-average attempt. He took four sacks but was otherwise impressive.

It’s important for the Saints’ upside that Winston marry his peak efficiency with the occasional explosive throw. No other version of Winston will get the Saints into Super Bowl contention. But if their defense gets back to their 2021 level and Winston continues to hit tight-window throws and move the chains (12 of his 23 completions went for a first down), he has Pro Bowl potential.

If you didn’t already grab Winston to win the award, you should consider it soon. Upcoming games against Tampa Bay, Carolina, and Minnesota are more favorable than not since if he plays well, it’ll be on a big stage against quality competition. Betting on Thomas is also a strong option at +600.

The best running back on the field between the Tennessee Titans and New York Giants wasn’t the back who entered the game as the favorite to win Comeback Player of the Year, Derrick Henry. Instead, Saquon Barkley stole the show. He averaged 9.11 yards per carry on 18 touches for 164 yards and a score. He added in 30 receiving yards on six catches.

Though his 68-yard run boosted his efficiency numbers, Barkley’s movement ability was impressive throughout his performance compared to the last two seasons. His cuts were sharp, and his first step was more explosive. It’s clear he’s as close to fully healthy as we’ve seen since the start of 2020.

We continued to promote Barkley’s value in fantasy football all offseason because he’d get touches regardless of his play. New York has no reason to avoid giving him touches. He has the highest floor and ceiling of any back on their roster.

At least through Week 1, Barkley looked back. Now is a great time to throw some money on his futures since Carolina and Chicago are coming up on the Giants’ schedule, and neither have a reliable run defense.

We expected JuJu to be WR1 in the Kansas City Chiefs’ pass-happy attack, and he did not disappoint in Week 1. Though he didn’t haul in a touchdown, Smith-Schuster was a consistent presence in the Chiefs’ shellacking of Arizona. Catching six passes on eight targets for 79 yards was a good start to his season.

JuJu may be a PPR king throughout the season if Patrick Mahomes continues to pepper him with targets. But will the scoring upside be there? As someone with a futures bet on Smith-Schuster, I’d have concerns that the Chiefs will rely on their scheme to manufacture easier touchdowns than just running shotgun with four receivers and letting Mahomes find the mismatch.

I don’t think taking a flier on Smith-Schuster is a great bet, but he is a riser this week. His performances over the next few weeks will dictate his scoring upside. If he has more red zone targets, I’d be more willing to believe he’s a legitimate threat to win the award.

Well, Week 1 was certainly not the performance the Carolina Panthers and Baker Bros were hoping to see. Mayfield relies on emotion to perform his best, and in the game, he should’ve been most motivated to play well; he looked like the guy he’s always been. His issues with accuracy, decision-making, and creating negative plays all haunted him and the Panthers.

It wasn’t all bad for Mayfield as the Browns won 26-24, as he connected on a 75-yard touchdown pass to Robbie Anderson and had the Panthers ahead by one point with just over a minute remaining. But his completion percentage was 59%. He registered a bad interception, took four sacks, and put four fumbles on the ground. He continues to have massive swings of good and bad in the same game.

There’s still a pathway to Mayfield winning the award since he’s a quarterback, but he’ll have to outperform Jameis Winston and a bevy of talented running backs. Upcoming games against the Giants and Cardinals are more favorable. If Mayfield can’t get it together over the next month, the Panthers’ season will be over before it really began.

After missing his entire rookie campaign due to a torn ACL, expectations were for Travis Etienne to come out and make the most of his opportunity as the lead back for the Jacksonville Jaguars. Unfortunately, things went awry fairly quickly, and the Jaguars looked like a mess. Etienne carried the ball only four times and caught two passes for 65 yards.

While he was efficient thanks to a 27-yard run that boosted his numbers, Etienne was out-carried by James Robinson. Trevor Lawrence blew an easy touchdown pass to Etienne. Finally, Etienne fumbled a ball and finished playing just 51% of snaps.

Etienne is explosive and capable of boosting this offense but his role is still undefined. Going against true workhorse backs with established skill sets is too tall of a task for a player in a disjointed unit. It’s also crushing to see him assume the backup role behind Robinson after he just returned from a torn Achilles.

No player saw a bigger drop from the preseason to Week 1 than Los Angeles Rams RB Cam Akers. Listed at +2500 only a week and a half ago, Akers was a fine longshot to make. After all, Sean McVay loves to ride one back and puts them in advantageous positions to succeed, and Akers was a stellar talent out of Florida State.

However, Week 1 was a huge letdown for fantasy managers as Akers only saw 12 snaps and three carries. McVay gave the majority of snaps to Darrell Henderson despite saying Akers would be able to play. Now, we’re left wondering if Akers is healthy and when he’ll be able to contribute.

There’s still plenty of time for Akers to make it up to fantasy managers but essentially missing a game puts him well behind his peers for this award. He’d need to immediately become the primary workhorse and outperform players in better situations to reenter the race. That makes him a hard fade.