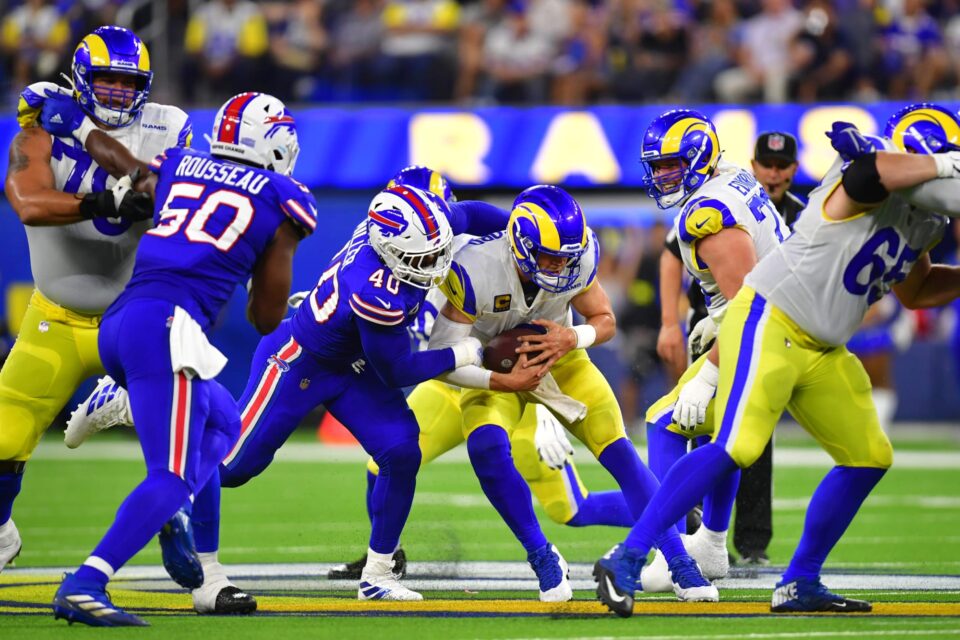 Apparently the Bills blowing out the Rams in the NFL season opener was too boring for one fan at SoFi Stadium as he got a pink smoke bomb onto the field.

Things couldn’t have been going much worse for the Los Angeles Rams in the first game of their Super Bowl defense, the NFL season opener on Thursday night against the Buffalo Bills. Matthew Stafford looked awful, the defense was gashed often, and the result was a huge second-half deficit.

And if that wasn’t bad enough, they couldn’t even just get on with the game to move on to Week 2 midway through the second half thanks to one fan running onto the field and causing quite the scene.

It looked like a gender reveal in SoFi Stadium as the fan ran out of the stands carrying a pink smoke bomb and ran across the stadium before getting taken down and escorted by security, but the pink smoke continued to bellow throughout the crowd until another member of the security team could come and retrieve it.

Rams-Bills halted by fan getting pink smoke bomb onto field

It’s a girl? Is that supposed to be our takeaway?

In all honesty, you have to wonder if Rams general manager Les Snead made a call to a fan a la Shooter McGavin in Happy Gilmore to interrupt the game to at least take some attention off of LA getting absolutely destroyed on the opening night of the 2022 season.

Unfortunately for Snead and fans of the champs, that won’t be the case. This isn’t just a loss and Super Bowl hangover — this looked like a Rams team that was far inferior when matched up with another contender in the Bills.

There are 16 games after this one, but even the pink smoke can’t overshadow the potential trouble brewing in the City of Angels.