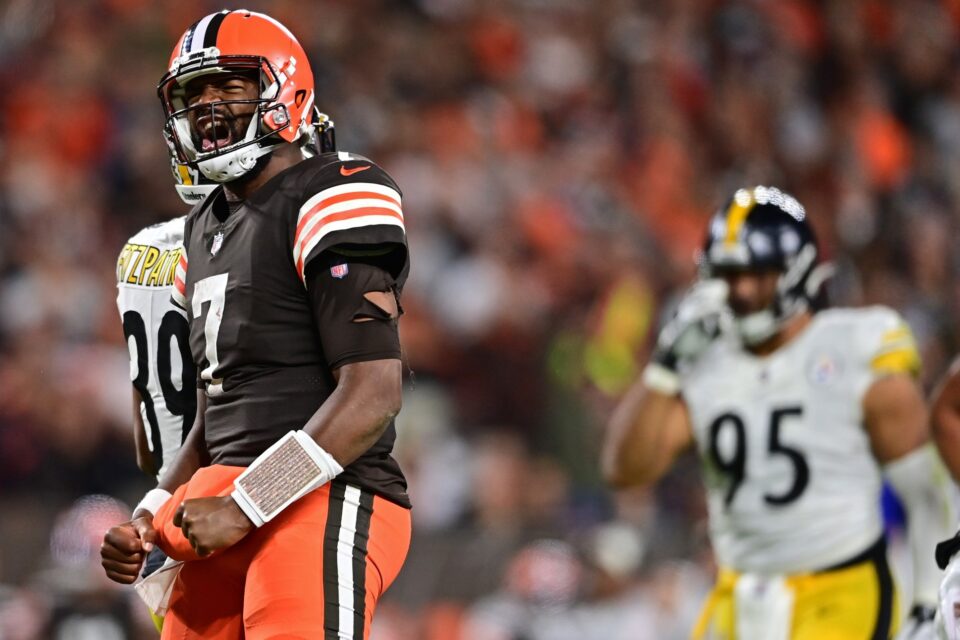 Jacoby Brissett and the Cleveland Browns sit atop the AFC North and will remain the division leaders regardless of the outcome of Sunday’s games in Week 3 because they hold the divisional tiebreaker. While that could easily change, it’s certainly a bit of a surprise — forced to play with their backup quarterback — that the Browns have a winning record as they wait for Deshaun Watson’s suspension to expire.

Initially suspended by the league for a year due to a pattern of graphic sexual misconduct, Watson saw his suspension reduced to six games upon appeal to an arbitrator. The league and Watson settled on an 11-game suspension to avoid bringing the issue to court, leaving the Browns to compete for more than half the season with a different starting quarterback than the marquee player they traded for.

This isn’t to say the Browns were caught unaware – they traded for a quarterback with troubling allegations from over two dozen women alleging sexual misconduct and structured his contract in a way to reduce the impact on his pocketbook.

Can the Cleveland Browns make the playoffs with Jacoby Brissett under center?

But in the meantime, they’ve built a team that can win in the short term — they just need a capable quarterback to steer the ship in Watson’s absence. They seemingly have found one in Brissett, who followed up an impressive performance against the New York Jets with an efficient game against the Pittsburgh Steelers. 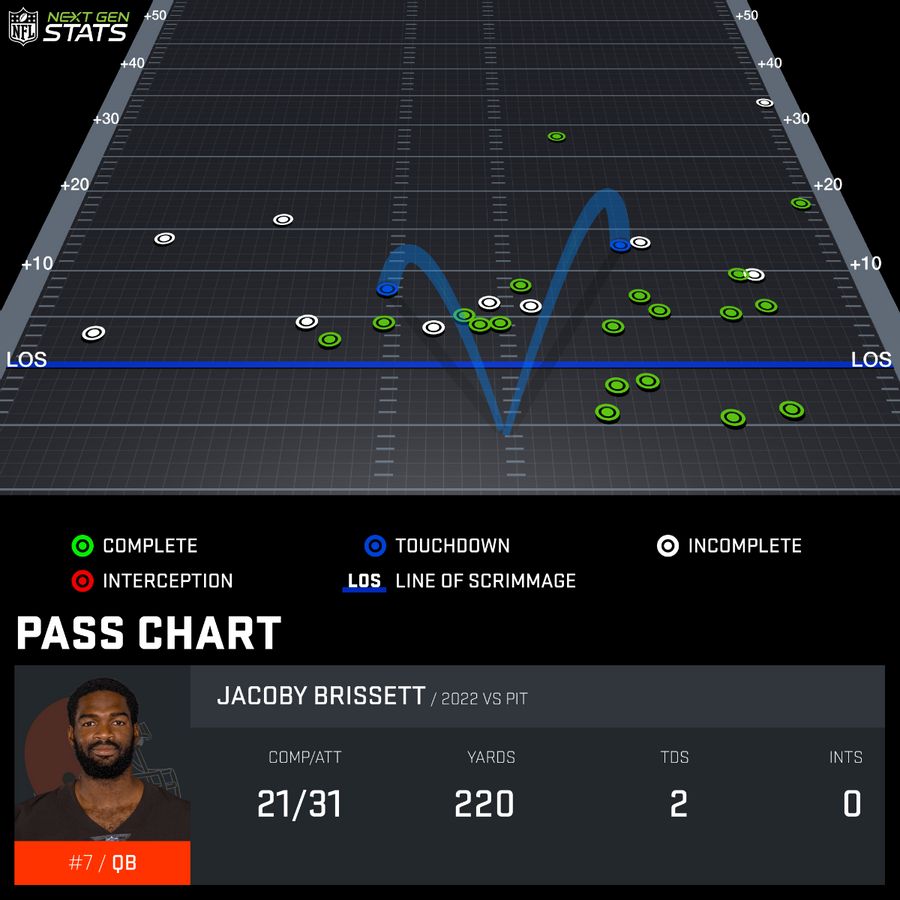 Brissett is clearly a limited quarterback in a number of ways, the most obvious of which is his incapability, or unwillingness, to consistently throw down the field. His average depth of target of 7.2 yards ranks 26th of 33 quarterbacks in the NFL, and his rate of 20-plus yard passes down the field ranks 26th.

But he’s getting the job done. He ranks eighth in expected points added per play, ninth in completion rate over expected, and 12th in adjusted net yards per attempt. He’s primarily done it by avoiding interceptions and sacks, ranking 26th in sack percentage and 28th in interception percentage.

His efficiency stands out from the pack there, too – Joe Flacco and Mitchell Trubisky also have low interception and sack rates but don’t have his efficiency. Part of that is the supporting cast, but a good chunk of that comes from how accurate he is.

It’s not just that his passes hit his receiver’s hands – he and Flacco are functionally tied in adjusted completion rate, which accounts for drops, spikes, and throwaways – but that he does a good job leading them for additional yards after the catch. Cleveland ranks 13th in percentage of yards after the catch, well ahead of the Jets (23rd) and the Steelers (31st).

But this level of play is new for Brissett, who had 37 starts under his belt before the 2022 season started and very few high-level performances. That said, it’s not as if he’s hit his career peaks – he’s had a few other games with better statistical outcomes, so this isn’t exactly an extreme outlier.

He’s getting rid of the ball faster than he ever has in his career, has been more consistent about finding the first down marker, and still fits in some tight-window throws in ways that he hasn’t in the past. Along with that has been an explosive running game, which ranks fourth in expected points per carry and tenth in success rate.The entire Browns offense is humming without Watson present, featuring good pass protection, a strong run game, capable receivers, and an efficient point guard at quarterback. Will that be enough to keep things steady while they wait for Watson to lead the team? 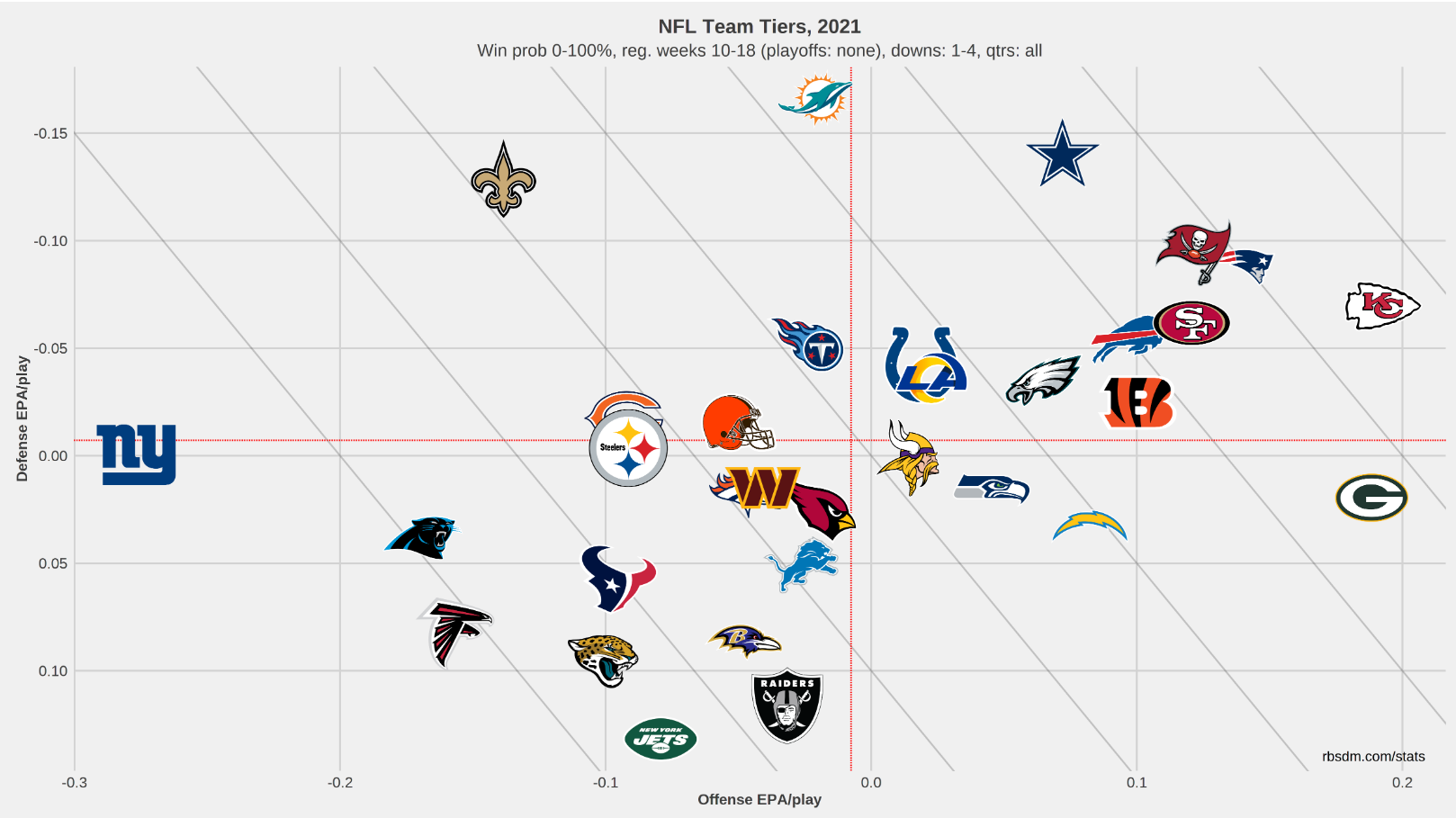 The Browns defense isn’t playing particularly well. Giving up two consecutive scoring drives to finish out the game against the Jets in Week 2 is one example, but they’ve been consistently giving up explosive plays despite a generally decent performance from down to down. The defense has a success rate on par with the rest of the league, winning their snaps 43.6 percent of the time. But they still rank 26th in expected points given up.

Not only that, the schedule gets much tougher after the Panthers, Jets, and Steelers. With the Chargers, Dolphins, Ravens, Bills, and Buccaneers coming up before Watson returns, there could be some big losses on the schedule.

Brissett’s performance also seems unsustainable. The Jets rank 31st in defensive passing efficiency, and the Steelers look significantly worse without T.J. Watt as a pass-rusher. The best passing defense Brissett has played, Carolina, held him down to a mediocre 4.9 adjusted net passing yards per attempt and 0.01 expected points per play. He’s also benefited from a little bit of interception luck that should regress soon, and his after-catch explosives are likely to drop as well.

His career numbers tell us it’s unlikely he’ll continue, the defense has been struggling, and though there is likely some relief on the way, depending on the long-term prognoses of Jeremiah Owusu-Koromoah, Jadeveon Clowney, and Anthony Walker – it’s unlikely to create a number of wins by itself.

On top of that, it’s unlikely that running success continues from game to game. Explosive runs drive the offense, and they are notoriously volatile. Last year, the Browns ranked first in rushing EPA through nine weeks, only to play the last eight weeks ranked 23rd in rushing EPA. Chubb is an excellent back, but even high-level backs have a difficult time sustaining that kind of success over time.

The Browns and the AFC North

Still, the Browns don’t need to win the division by Week 13. They simply need to be in a position where they can push to win most of the final six games of the season and establish a spot for themselves in the playoffs.

The Steelers are unlikely to seriously challenge for a playoff spot, so the Browns just have to keep pace with the Bengals and Ravens before Watson can play them in Weeks 14 and 15.

And despite the Bengals’ struggles, there’s some chance they can turn it around given their impressive skill corps and Joe Burrow’s talent. The bigger issue, however, will be the Ravens, whose collapse against the Dolphins doesn’t mean they aren’t an incredibly talented squad.

Because of these surprising losses to begin the season, that could give the Browns the cushion they need to be competitive by the time they play the Texans in Week 13, allowing them to steal back wins from those two teams in the subsequent two weeks.

If the Browns can maintain a .500 record through the next eight weeks, it’s possible they can keep the positioning they need to win late in the season and earn a playoff spot. But they’re only favored in one of those games –- their matchup against the Falcons in Week 4 — and face heavy odds in some of the others.

These odds largely assume that Brissett won’t continue at his current pace, and that’s a fair assumption. But the system he’s playing in, the supporting cast he sees, and some of the new skills he’s playing with point to a quarterback who has seen another level of talent. It’s difficult to get quarterbacks to change their timing and accuracy, but Brissett has done it in Cleveland with the help of a great play-caller in head coach Kevin Stefanski.

The defense is more likely to get better than worse – even if it’s not world-beating – and though the running game is likely to cool down, there’s enough there to project that the Browns could finish this 11-game stretch with a few more wins, maybe finishing 5-6.

Despite many writing off the Browns’ playoff odds, there’s an outside chance that they could weather this stretch without their starter and sneak into the playoffs.