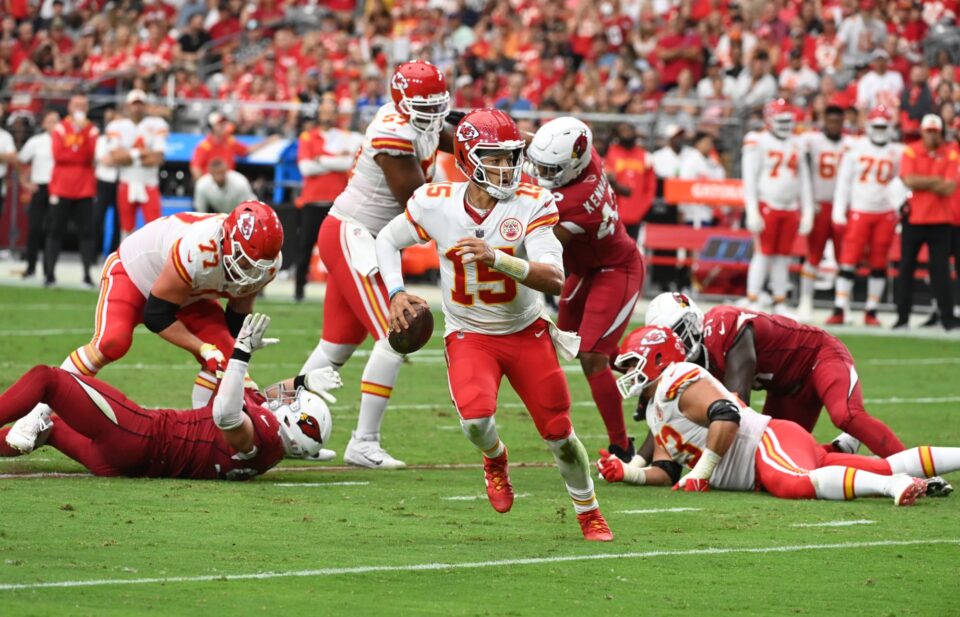 Despite a hellaciously good performance against the Cardinals, Patrick Mahomes got no respect from PFF, and Chiefs fans are in an uproar.

Another day, another great performance from Patrick Mahomes and the Kansas City Chiefs. However, Pro Football Focus doesn’t feel the same way.

They gave Mahomes the eighth-highest grade for Week 1.

Say what? Eighth? Sure, Josh Allen deserves to be No.1 after what he pulled off against the Rams, but Mahomes at eight? Surely, this had to be a joke.

It wasn’t, and Chiefs fans were outraged at what was shown and proceeded to make their feelings known by running to their keyboard and hammering the keys to show their frustration.

Mahomes had by far the best game this week. How is he not 1?

What?
Mahomes -15 for not brushing his teeth b4 game??

Explanation on the Mahomes grade? Don’t remember many turnover-worthy plays. Just feels a bit off to see a guy throw for 360 yards and 5 TDs with no picks and get a grade in the low 70s

Is this not embarrassing for y’all?

@PFF_Eric could you or someone else at PFF please provide some sort of transparency on this? Would love to see a snap by snap breakdown of the grading process to explain how Mahomes’ grade was this low (and typically is always lower than his level of play)

Mahomes went 30-of-39 for 360 yards and five touchdowns with no turnovers. If anything, that deserves at least a 90. But 70? Do they need their eyes checked for their grading?

Josh Allen, already said he’s fine. Kirk Cousins? A rare hot hand but we can be okay with his rating, even if he should not be above Mahomes. Ryan Tannehill? Not even close. Justin Herbert? He looked great against Vegas but not better than Mahomes. Jamies Winston? Not above Mahomes either. Lamar Jackson? Too low of a rating for sure, but not above Mahomes. Jalen Hurts? Nope.

Mahomes can get the last laugh, though, if he continues this trend and ends up with a prize better than a rating, the Lombardi trophy. But that won’t be enough to satisfy Chiefs fans after this Monday morning slight from PFF.