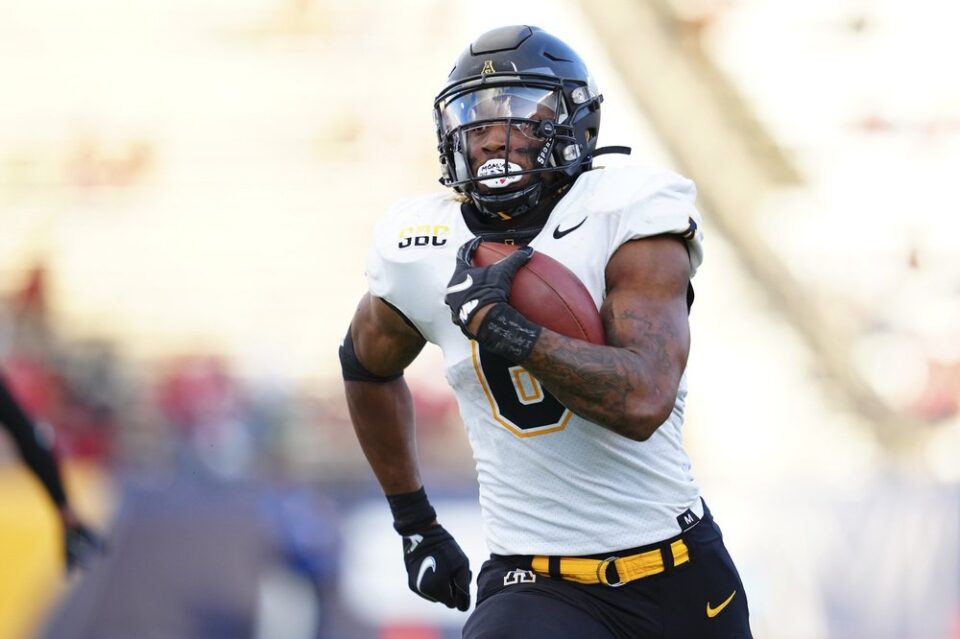 There’s been an overwhelming defensive element to Appalachian State’s draft history. An early look into their 2023 NFL Draft prospects would suggest that trend could continue next April. Head coach Shawn Clark’s team features several impact makers on that side of the ball. However, there’s a sprinkling of offensive prospects in the mix too, creating an appetizing college football product with exciting next-level potential.

After tallying 68 tackles (17.5 for loss) and 11 sacks, Nick Hampton is the top returning pass-rush producer for Appalachian State. In fact, his 19.5 career sacks make him the most potent returning pass rusher in the entire Sun Belt conference. The fifth-year edge prospect’s exploits last season have already garnered national attention, with Hampton featuring on the Shrine Bowl 1000 Watchlist.

Meanwhile, his weight room heroics form part of an athletic profile that earned him a spot on Bruce Feldman’s “Freaks List.” You can see Hampton’s elite athletic profile at work on the field, as he’s a speed rusher who also boasts impressive power from his 6’3″, 235-pound frame. While the physical tools are exciting, Hampton’s ceiling is raised by a pass rush plan that includes combo-usage of an already bulging pass-rush toolbox.

Scouting isn’t done on statistics, but it’s hard not to draw attention when you snag five interceptions in a single season. That’s exactly what Appalachian State cornerback and 2023 NFL Draft prospect Steven Jones Jr. did during the 2021 campaign. There were few more productive defensive backs in the entire nation, including his own teammate Shaun Jolly, who begins the 2022 NFL season on the Cleveland Browns roster.

Jones begins the college football season on the Shrine Bowl 1000 watchlist and has a genuine shot at hearing his name called in April. The 5’10”, 185 pounds cornerback is a high-level processor who can act on his football instincts with quick feet, fluid hips, and vertical athleticism that allows him to challenge at the catch point despite his smaller stature. Jones also has that physical play style that separates the good from the great at the cornerback position.

After starting his career at Clemson, a brief stop at Duke bought Chase Brice to Appalachian State, where he impressed with 3,337 passing yards and 30 total touchdown passes last fall. Heading into his sixth season, Brice is a Shrine Bowl 1000 watchlist prospect who could elevate his 2023 NFL Draft stock this year. The App. State QB has the arm strength to reach all levels of the field, the ability to go through his progressions, and a top-tier understanding of coverages that allows him to direct defenses for fun.

Hampton isn’t the only Appalachian State pass-rush prospect in the 2023 NFL Draft. However, labeling Brendan Harrington as purely an edge prospect is a disservice to his ability as a Swiss army knife for the Mountaineers. At 6’1″, 215 pounds, he’s a safety-sized linebacker who was expected to play there early in his career but has played multiple positions. Harrington possesses excellent play speed, can get off blocks well despite his smaller frame, and also brings special teams experience as a gunner on punt returns.

A testament to his ability at the right tackle spot, Cooper Hodges starts the season on the Outland Trophy, Lombardi Award, and Shrine Bowl 1000 Watchlists. In 14 starts last fall, the Appalachian State staff credited Hodges with 84 knockdown blocks. As you’d expect for someone with that level of knockdowns, the 6’4″, 305 pounds offensive tackle plays with aggression and power and a mauler’s mentality in the ground game. That said, there’s also a level of finesse to his handwork, and he has the athleticism to be impactful on the move.

Both of Appalachian State’s offensive tackles should garner attention in the 2023 NFL Draft. Anderson Hardy holds down the left side, and was responsible for 51 knockdown blocks last fall. At 6’6″, 290 pounds, he’s a tall, slender tackle with decent arm length who has shown that he can manipulate his opponent at the point of attack. Meanwhile, he has the athleticism to mirror pass rushers in protection while routinely working out to the second level in the ground game.

After tallying eight interceptions in the last two playing seasons for Central Connecticut State, Dexter Lawson steps up to the Sun Belt Conference with an eye on asserting himself as a 2023 NFL Draft prospect. Landing on the Shrine Bowl 1000 watchlist is a good start towards that goal.

The 5’10”, 190-pound playmaker will be the starting CB opposite Jones this season. He has the footwork to match receivers through their route, he times his break well to be in a position to make a play, and he can get up well to compete at the catch point.

You can’t spell Camerun Peoples without “run,” and the Appalachian State back has been running all over the Mountaineers’ opponents for the past two seasons. Heading into his fifth campaign, the 2023 NFL Draft prospect has tallied over 2,200 rushing yards and 28 touchdowns.

At 6’2″, 225 pounds Peoples is a physical threat who absorbs contact for fun. However, he also showcases deceptive acceleration for his size and has the long speed to rip off chunk plays. To top it all off, he has the vision to extend runs by finding cutback lanes.

Appalachian State has a legitimate shot to have two running backs selected in the 2023 NFL Draft. Although Peoples lived in the end zone last year, Nate Noel led the team with 1,128 yards while averaging 5.7 yards per carry.

The 5’10, 190-pound running back has extremely impressive footwork that allows him to make the most out of any space he’s afforded. He boasts impressive burst and speed, and like his teammate, he’s able to break free of contact to extend plays. When called upon, he also flashes receiving ability.

With D’Marco Jackson departed for the NFL, Trey Cobb is the top returning tackler to Appalachian State after logging 72 tackles last fall. Highly productive in multiple phases of the game, six of those tackles were for loss, and Cobb also snagged three interceptions and forced a fumble. The 6’2″, 215-pound LB is a tackling force who can make plays with physicality and good technique. As a coverage linebacker, he possesses the movement, ball skills, and play recognition to ensure that he’s in position to make a play.

Other potential Appalachian State prospects in the 2023 NFL Draft