Two Offensive Powerhouses and 19 Players To Choose From 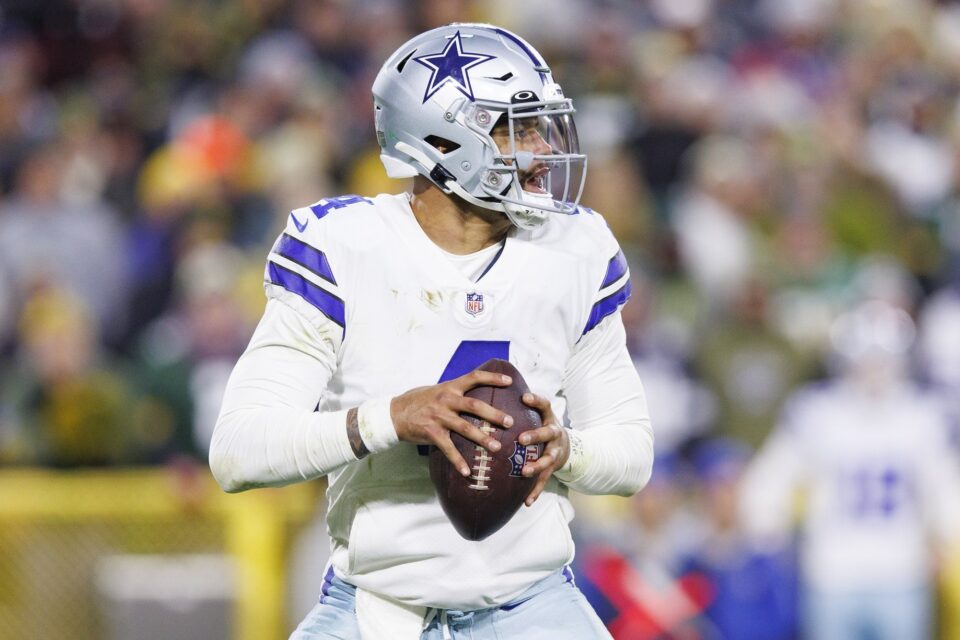 If you’re making Minnesota Vikings vs. Dallas Cowboys DFS picks for Sunday in Week 11, you’ve come to the right place. We’ve analyzed each team’s highest-probability game scripts to assess the most likely outcomes, including which players are in line to thrive more than anticipated or fall short of expectations.

There are 19 solid DFS options for six slots. Nine of these players are Vikings. Their “big five” include Dalvin Cook, Justin Jefferson, Adam Thielen, T.J. Hockenson, and Kirk Cousins. All are expensive to varying degrees. If they were playing the Texans, we might figure out how to start four of them, while going cheap on a fifth.

But against Dallas? No way, unless we think the Vikings’ defense will stymie the Cowboys’ near-elite offense. And I don’t see that happening.

So we turn to the next tier of mid-priced Vikings: K.J. Osborn and Greg Joseph. Osborn clearly has a higher ceiling. Dallas has surrendered 10 WR touchdowns, tied for fifth most in the league. While Osborn’s far from dependable, one big catch and run could make him more than worth his price.

Finally, we have the Vikings D/ST and Alexander Mattison. Since I believe in the Cowboys’ offense, I’m steering clear of the D/ST. But Mattison? Could he somehow break through?

Dallas has the other 10 players to weigh, with one major question mark. At the top of this food pyramid are Dak Prescott, Tony Pollard, and CeeDee Lamb. Pollard fits if Ezekiel Elliott sits. If Elliott returns, Pollard would be a major risk at his steep price.

The next tier consists of Elliott (if he returns), Dalton Schultz, Michael Gallup, and Noah Brown. These are mid-priced guys with mid-range potential.

Schultz remains my favorite in this group, with Gallup coming in at No. 2. Minnesota’s yielding only 3.7 yards per carry to opposing running backs. This seems like a game where Prescott will need to look downfield more than usual.

Finally, there’s Brett Maher, the Cowboys D/ST, and (if Elliott is out) the ultra-cheap Malik Davis. For now, I’m assuming Elliott will be active. Maher and the D/ST have pretty low ceilings, although Maher could surprise. Still, in a contest that could exceed 55 combined points, burning a DFS slot on a kicker seems like a wasted opportunity.

Expensive and necessary. Prescott has a higher ceiling than Cousins, and teams have learned that to beat Minnesota, you need to win through the air. Prescott has all the resources he needs to score 4+ TDs.

I went back and forth between Lamb and Jefferson. Ultimately, with Jefferson more expensive, Lamb gives us a little more financial flexibility to get an extra mid-tier player. And it doesn’t hurt that he’s as locked in as any wideout.

One of the most effective red-zone targets of the last three years, Thielen could be a complete bust. Or it could be “his turn.” That’s the nature of betting on NFL players. At the very least, this game is well suited to his strengths as a reliable pass catcher and, historically, a scoring machine.

See Thielen above. Not the same track record. But talented nonetheless and still the Cowboys’ No. 2 WR. Not a bad investment, despite his inconsistencies.

One of the best playmaking TEs in the game. His DFS price hasn’t caught up with his high production probabilities.

We have $5,200 remaining. Osborn is a nice hedge alongside Thielen. I wish we could afford Hockenson, but his $7,200 price puts him well out of reach. Osborn’s coming off an 11-target game. If Cousins is slinging it, we might have a difference-maker.