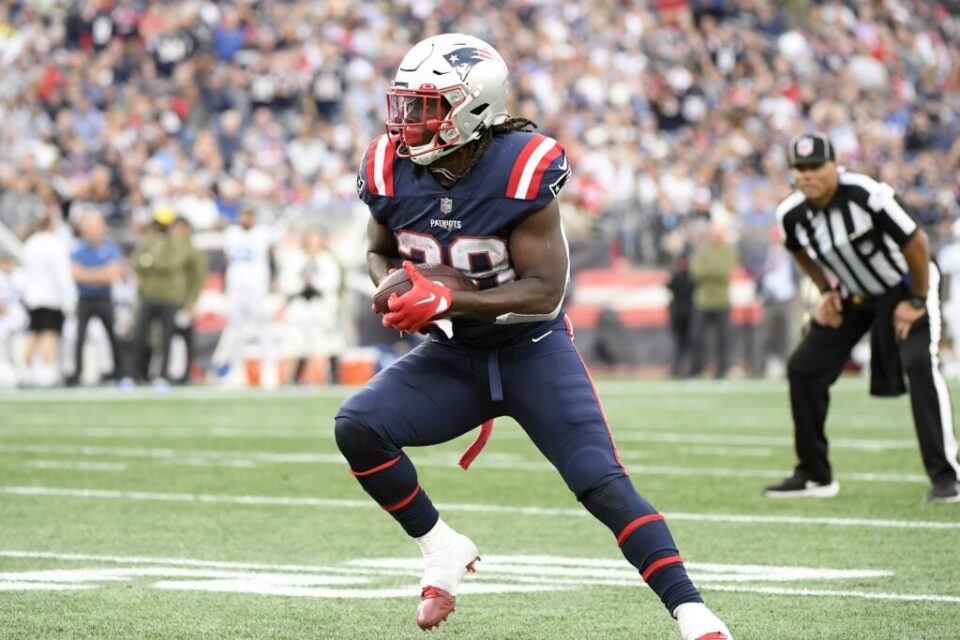 If you’re making New England Patriots vs. New York Jets DFS picks for Sunday in Week 11, you’ve come to the right place. We’ve analyzed each team’s highest-probability game scripts to assess the most likely outcomes, including which players are in line to thrive more than anticipated or fall short of expectations.

I thought this team was finished four weeks ago. They’d just been embarrassed at home on Monday Night Football, losing 33-14 to the 2-4 Bears. Four of the Patriots’ next five games would be against the Jets (twice), Vikings, and Bills. Another game against Buffalo, plus tough contests versus Miami and Cincinnati, await down the stretch.

And New England had no certifiable starting QB, with a struggling Mac Jones competing against up-and-down rookie Bailey Zappe.

Ah, but this is New England. The most decorated NFL franchise of the past 20+ years. Sports royalty. And still helmed by alleged (or certifiable to his friends) mastermind Bill Belichick.

The Patriots are winning again with defense, and with a running game led not by Damien Harris, but by second-year de facto starter Rhamondre Stevenson, who’s averaging a cool 4.8 yards per carry. His only sub-4.0 effort since Week 2 was against Chicago, when a negative game script earned him eight receptions. That’s a pretty nice floor for any DFS investment.

What about the passing game? Jakobi Meyers seems like an obvious start, except the Jets have surrendered the third-fewest WR yards in the league. Maybe this is a game where the cheaper Hunter Henry or even Jonnu Smith produce more value.

How much can we trust New York’s backfield? That’s the most pivotal question when crafting the Jets’ side of this DFS slate.

To be blunt, their running backs have tanked since Breece Hall got knocked out for the season in Week 7. In that game, Michael Carter rushed 13 times for only 29 yards — after Hall reeled off 72 yards on only four carries. Carter and the newly acquired James Robinson struggled against New England the following week, combining for only 43 yards on 12 carries.

Robinson didn’t do much better in their last outing versus Buffalo. Yet, Carter snapped back in a big way, helping to lead the Jets to victory with a 12-76-1 rushing line.

The concern is that these two might cancel each other out on Sunday. Facing a soft defense, perhaps we could start both in DFS and hope for 25+ combined points. Instead, they’re facing a New England defense that’s given up only 4.1 yards per carry to RBs, and merely one rushing score to the position.

Meanwhile, Zach Wilson has only two passing touchdowns in his last nine road games. Yes, it’s true. Throughout his young career, Wilson has been wildly less effective away from home: double the sack rate, half the TD rate, half the rushing yards per game, etc.

The best likely outcome for him would be 35-40 rushing yards and a rushing score while limiting his mistakes in a close, low-scoring game. However, we can’t always bet based on optimal results. His floor remains dreadful.

Don’t overthink it. Yes, Jones could connect with Meyers for an 80-yard score in the first quarter, leaving you wondering why you ever listened to me. Realistically, Stevenson should remain the offensive focal point, leading all players in production and all RBs in efficiency.

This decision assumes a spread-the-ball passing attack against a tough Jets D. Maybe Jones will rack up 160 yards and a score. Given our salary cap considerations, I’d rather bet on him than bet on the similarly priced Meyers ($8,400) or any less dependable New England wideout.

A desperate Zach Wilson playing catch-up in the second half, targeting his No. 1 receiver a half-dozen times. The Patriots aren’t invincible through the air. They’re simply “very good.”

While I see Zach committing at least one turnover and getting mostly shut down on the ground, Garrett has a realistic shot of leading all Jets in scoring.

A bit of a hedge in case Corey Davis inherits more looks in his return. If Davis is a late scratch, then we can easily pivot to the boom-bust DeVante Parker ($6,400).

This isn’t because this unit scored 26 DFS points in their last game — although that helps. They’ve scored 8+ points in six of nine contests, thanks in part to 2+ sacks in eight contests. They’re also on an eight-game interception streak. I’m very comfortable betting on them to keep New York under 15 points.

I don’t usually recommend kickers in DFS, because QBs, RBs, and WRs — and even most starting TEs — have higher ceilings. Touchdowns are king, and kickers don’t often score more than five points at a time.

But Nick Folk is built differently. Some say he’s made of rawhide and steel. I can’t say for sure. All I know is that he’s hit nine field goals in his last two outings and can still boot it from 50+. In a defensive battle, he’s a potential DFS bargain.